RUSH: CNN has confirmed that they settled with the student from Covington Catholic High School, Nick Sandmann. CNN has reached a settlement with Sandmann, the northern Kentucky high school student who had sued CNN saying it defamed him.

A CNN spokesperson confirmed yesterday with the Cincinnati Enquirer that a settlement was reached. The network would not comment on the details. Nick’s lawyers would not respond to phone calls or emails requesting details. 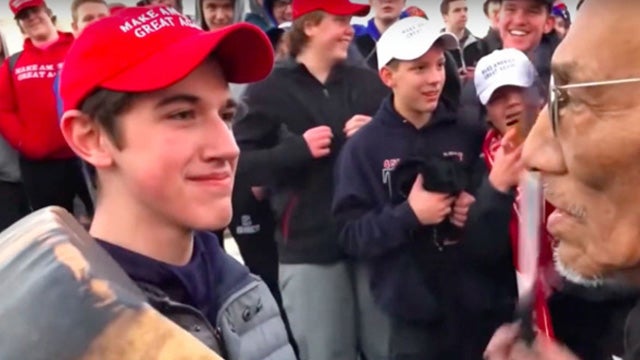 You remember this. Sandmann and his buddies were touring Washington, D.C., last January when out of nowhere a Native American Indian activist by the name of Nathan Phillips started responding to a disturbance that was created by the Congressional Black Israelis or whatever they were called, and Nathan Phillips starts charging up to Nick Sandmann. And Sandmann stands there and smiles trying to defuse the situation.

The Drive-By Media loses it, talking about how they would love to punch the kid in the face and knock that smirk off of his face. And they portrayed Nick Sandmann as the guy who started it. Then they said Nick Sandmann was obviously a white supremacist and a racist, and he was taunting this frail, old Native American activist, Nathan Phillips. It’s Phillips up there playing some war drum, banging on it with his group of supporters following up there face-to-face with Sandmann.

It was at a March for Life rally on January 18th that Sandmann and his high school classmates attended. Phillips was attending the Indigenous Peoples March. Sandmann sued CNN, asking $275 million. It was filed last March. The lawsuit stated: “CNN brought down the full force of its corporate power, influence, and wealth on Nicholas by falsely attacking, vilifying, and bullying him despite the fact that he was a minor child.”

“Sandmann has also sued NBC and the Washington Post. His lawyers have said they also intend to sue Gannett, which owns The Enquirer,” and of course USA Today. We don’t know how much money, but I mean, it was outrageous what they did to that kid and his schoolmates. And it was classic, a classic illustration of the true bullying nature of the American left today.