Trump’s Messages to the Mullahs

RUSH: Here’s a little bit of President Trump today from the speech. We’ll start at audio sound bite number 6. He made a dramatic entrance. Oh! A lot of people are wondering why this particular area of the White House. This was not the Diplomatic Reception Room. It was not the Oval Office. It was not the East Room. It wasn’t a room, actually. It was a hallway. I’ll tell you where this was. 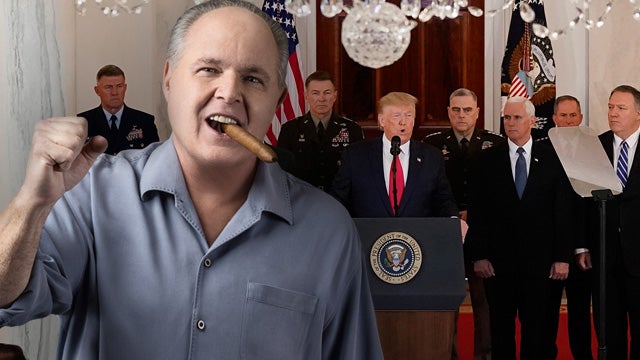 If you remember watching some presidential prime time press conferences, you see the president come out of a door and walk down a long hall with a red carpet on it. It’s in that hallway that this took place. The pillars are right there. The Drive-Bys are seated behind the pillars. There were some Drive-Bys that probably did not have a view of the president and the podium because they were behind a post, a column. So why was it there? Well, the decor of that area happens to be red and gold.

In Middle Eastern culture, he who has the gold holds all the cards. Even the choice of location in the White House was a message to the mullahs and the terrorists in Iran — and do not doubt me on this. It’s just like George H.W. Bush would never pronounce Saddam Hussein’s name correctly. He always called it “SAD-um,” because in certain parts of Iraq the word “SAD-um” is the equivalent of a dirty shoe with animal feces on it. 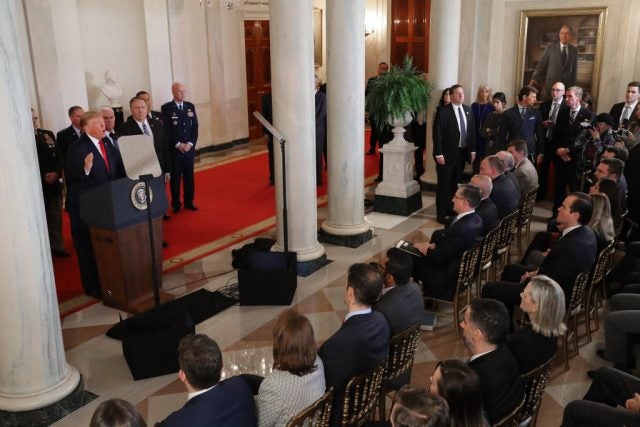 So he pronounced Saddam’s name “SAD-um,” and everybody said, “Does Bush really not know how this guy pronounces his name?” No, he knew. Just like Trump knew a lot of red and a lot of gold sends a signal to the mullahs: He who has the gold holds all the cards. The president came out in that setting and before even greeting the room told everybody that Iran will never get a nuclear weapon on his watch.

THE PRESIDENT: As long as I’m president of the United States, Iran will never be allowed to have a nuclear weapon. Good morning. I’m pleased to inform you, the American people should be extremely grateful and happy. No Americans were harmed in last night’s attack by the Iranian regime. We suffered no casualties. All of our soldiers are safe, and only minimal damage was sustained at our military bases. Our great American forces are prepared for anything. Iran appears to be standing down, which is a good thing for all parties concerned and a very good thing for the world.

CALLER: Truly an honor, Rush. Thank you kindly for allowing me to call. Right to the point. In ’78 when we had a peanut farmer that was totally as incompetent as a president could be, the day that Ronald Reagan — the great Ronald Reagan — got inaugurated, they got the message. The message was sent, and ever since that time the message was there, and it never was pushed because they knew Ronald Reagan was capable of doing the right thing to make sure that they were standing in line.

As the policy and the international policy proceeded through the decades, here we came again to a chance to prove who we truly are and what a great country we are. That is our president, Donald Trump. He sent the message, and he said, “I will back it up,” and he did back it up. The very point is through the years, people ignored the fact that they understood only one thing, and that was the person of the word of Ronald Reagan. He said he would do it. They knew he would do it. So they released ’em. Here we come to Donald Trump, full circle, and he did it, and Donald Trump will never back down from these people.

RUSH: Yeah, but, you know, you’ve made a good point, or you’ve helped me make a good point here, and you can make it about more than this. We had a roaring economy in the eighties that was jump-started by tax cuts. Why do people forget that? Why do the Democrats get away with characterizing the eighties as an irresponsible decade of greed and selfishness? They start raising everybody’s taxes left and right. Trump comes along, cuts taxes. Look at the economy. It is roaring in ways we haven’t seen, in some of our cases, in our lifetimes. Reagan, you’re right about dealing with Iran back in 1979 in the presidential campaign — and yet, after that, we forget all about it and we become appeasers again every time with any president after Reagan. Now we got a new phase here with Trump again. The cycle repeats.