RUSH: There’s a fascinating story here. You know, money has always been said to be the mother’s milk of politics and that whoever has the most money to spend on political ads is generally thought to be in the driver’s seat. It’s not axiomatic that the biggest spender always wins, but it is considered to be a nearly insurmountable advantage, which is why fundraising is such a big deal. It’s why people brag about their fundraising.

The Trump Republican apparatus in the last quarter was at 45, $46 million raised. The Democrats were in the thirties. And the Trump fundraising machine is huge. You don’t even know the half of it, by the way. Every one of these Trump rallies, you would not believe the work being done to identify everybody who shows up inside and outside. 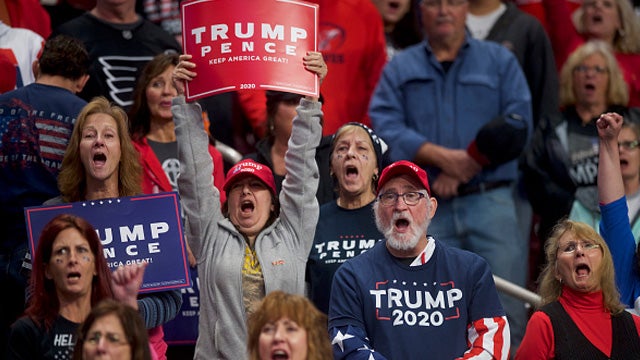 After every Trump rally — and I don’t want to give too much away here — after every Tramp rally, they know who in that crowd voted and who didn’t, for how many years they haven’t voted, if ever. They know whether they voted Democrat or Republican. This is based on what people tell them. The point is, at every one of these rallies, everybody that shows up is exhaustively researched.

It’s not an invasion of privacy. They’re all talked to. And if people don’t want to respond, then they don’t want to respond, and they’re not included. Potential fundraising is calculated. And, folks, I’m not gonna give you specifics because I don’t want to give away the store here, but at these Trump rallies in the past two years, the numbers of people who didn’t vote for Trump but who plan to, is off the charts.

You would think that people attending a Trump rally are people that have voted for Trump, and you wouldn’t be incorrect. I mean, that’s a natural assumption to make and you would think that they’re Trump supporters, but it’s really incredible how many — and this is inside and outside. This is also of the people that don’t get in. And that’s a huge number. You know, you have a 10,000-seat arena. There may be 20,000 people that have lined up and failed to get in.

They’re all talked to, and they are all interviewed, and it is discovered how many of them voted for Trump, how many of them didn’t and now are showing up at rallies. They are identified with their potential in terms of fundraising. And they’re small donors. They’re not giant corporate givers. But the statistics that are coming out of this are phenomenal. And the Trump people are not making a big deal out of it externally, if it holds up, and, by the way, it’s hard to extrapolate it nationwide.

I mean, even though a Trump rally is a huge thing with say a grand total of 30,000 people there inside and outside, that still is a small sample when you’re talking about nationwide voting. But it does provide data from which trends can be scientifically projected and analyzed. But the bottom line of it is that the people showing up in large numbers are people that didn’t vote for Trump in 2016, in addition to people who did. And almost everybody showing up intends to vote for Trump in 2020 whether they did or didn’t in 2016.

Now, I don’t know how much of this the Democrats know because they’re so inwardly focused and they’re so distracted. They’ve got their own campaign going on, and right now they are all at each other’s throats as their frontrunners are trying to secure their nomination. But it is a huge advantage.

You could donate, and they did do a lot of organizational work in the delegate selection process. I mean, they had to really get in gear after Colorado. I don’t know if you remember, but there was a period of time there where Trump was winning a lot of votes but not getting a proportionate number of delegates because the delegate assignment process did not explicitly follow the vote, even in the Republican primaries.

So they had to put together a team of people to literally go lobby these delegates after each of these primaries, and Colorado was a great example where the people that lost were ending up with a lot of the delegates, and the Trump was campaign was looking at it, “What the hell is this? We’re winning these primaries.” It was almost a Bernie Sanders type circumstance. They got organized, and they got that fixed, obviously, Trump ends up with the nomination.

Now, the reason I mention all of this is because on the Democrat side you’ve got two billionaires that are just flooding that campaign with money. So I thought it would be interesting to look and see how they’re doing, because money, as you know in many people’s minds, equals success. So who is leading in the Democrat primary right now, the Democrat presidential race?

Despite everything you’ve heard, it’s still Plugs. Biden is still the frontrunner. This is not a comment on whether that makes sense or not. It’s just what it is. Joe Biden has spent, to date, his campaign has spent $3 million. Michael Doomberg has already spent $153 million, and he’s in fifth place. Tom Steyer, the environmentalist wacko literally insane Looney Tune Democrat, has spent $116 million, and he’s not even on the chart. You may have seen some of Steyer’s spots. I have. 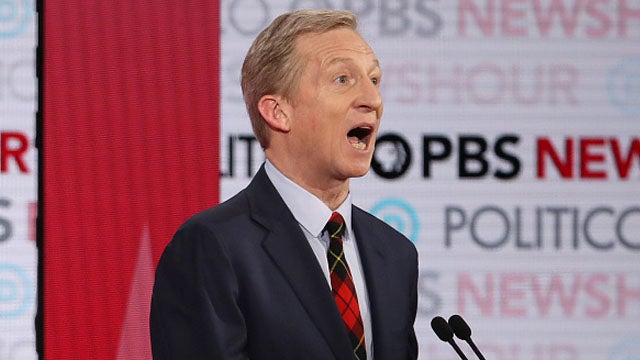 RUSH: One other thing on these amounts of money. I mentioned Doomberg at $153 million, Steyer $116 million, Plugs at $3 million. To be precise, this is not money raised. This is money spent on TV — TV ads — which makes the point even more powerfully. Plugs has only spent $3 million in TV ads, and he’s leading in the primary. Doomberg, $153 million. He’s not even been in very long. That’s $153 million of his own money, and he’s in fifth place.