RUSH: One of the things that I have made a point of over and over, and I have for many, many moons, is that most of us feel like we are being governed against our will. Obama, the Democrats win, and they govern against the will of the people. It’s a sinking sensation. And I have made the point over and over again that liberalism is not the majority of thinking in this country, and it’s not even close. And yet it appears to be the dominate way of thinking.

So there’s a Gallup poll out here today filled with a couple of charts which even if I screenshotted these and put ’em on the Dittocam, they’d be so small you couldn’t follow ’em. I’m not a big chart guy. Like I’m not a big video guy. And the reason is, I can learn it much faster reading it than watching it. I can get the point of a video in 30 seconds instead of watching five minutes of it. 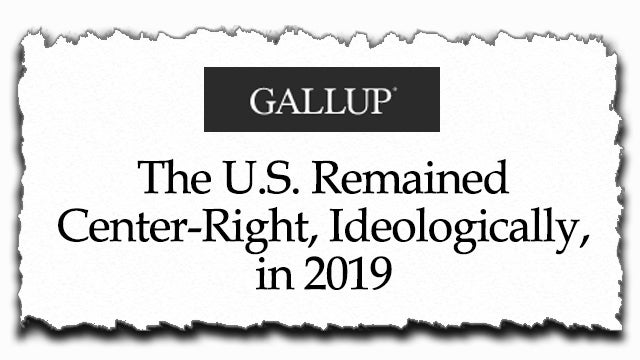 Be it in the news, be it in movies, throughout pop culture, in church. It doesn’t matter where you go. Except, isn’t it interesting? At least… Well, speaking for myself, I never run into ’em. Throughout my career… Let me give you a little anecdote. Throughout my career… What am I? Well, in the Drive-By Media I am “controversial,” and I am “outspoken,” and I’m “extremist,” and I’m “mean-spirited,” you know, all these labels.

And over the course of my career, folks — I will be honest with you — there are people who have been reluctant to go anywhere in public with me because they have been afraid that I’m gonna be set upon by hecklers and mobs who intend to do me harm. And it never happens. It has yet to happen anywhere I’ve gone. I mean, I can’t give you specific examples. (I could. I’m not going to.) I could give you individual names of people who say, “Rush, are you sure we ought to go there? My God. That’s gonna be dangerous.”

I tell everybody, “No. The only people we’re gonna encounter are people who are huge fans, supporters. That’s all that ever happens,” and yet there is this… Eh, it’s not a fear. There’s a belief that any conservative is gonna be mobbed. Now, it’s because we do see that in political events. You can have a Sarah Palin go out, and an organized mob shows up — or Trump announces a travel ban and an organized, paid-for mob wearing vagina hats shows up all over the country.

But those are not organic. They’re bought and paid for. They’re made to look organic, and the media treats them as organic — as though they’re spontaneous and natural — but they’re not. By the same token, conservatives don’t do that. Conservatives or Republicans don’t organize and pay for protests. They just don’t do it. It’s not in our makeup. We’re not malcontents. We’re not running around thinking we’re grievanced all day long about things.

They do. The fact of the matter is, folks, we outnumber them nationwide. But, one of the two most influential areas determining public opinion? I would say that they are the media and education, and who owns those? The left. The Democrats. You throw in pop culture. Add pop culture to the day-to-day Drive-By Media, and you would be forgiven if your assumption was that we are vastly outnumbered and that we are a tiny minority and, as such, we are losing the country.

When in fact, in the Gallup poll, 24% of this country identifies itself as liberal — and the Gallup headline itself says it. According to the latest Gallup poll, even as America has become more liberal, it has remained a center-right nation — and I have been trying to pound this point home on issue after issue. We have never been even 50-50 on abortion. This country has always been center right, even on abortion. It is what…

“They’re killing us, Rush!” “Twenty-four million evangelical voters are killing us? You try to win elections without ’em,” I say, “You can’t do it.” But everybody falls prey to the media. Everybody buys the notion that if they’re a Republican or conservative, they’re in this distinct, tiny minority. It isn’t true. Even this headline’s a little misleading. “Yes, America Has Become More Liberal.” Who says? It has remained a center-right nation. The election of Donald Trump is some evidence of that.

I mean, Trump is not an ideological conservative and did not run as one.

But there’s no question he’s not a leftist.

If anybody is center right or right center, it would be Trump. “[I]n 2019, the ideological balance of the country remained center-right, with 37% of Americans, on average, identifying as conservative during the year, 35% as moderate and 24% as liberal.” Liberals are the smallest of the three, twenty-four freaking percent — and I’ll tell you something else. This percentage of moderates? There are more conservatives than liberals in that group. They’re just people afraid to say they are for the very reasons that we are discussing here.