A Recap of the Boring, Dryball Democrat Debate

RUSH: I mentioned the Democrat debate last week, how dull and boring and lifeless it was — and it’s not just me saying so. First, we have here a montage of the Drive-By Media. They were terribly disappointed, very let down. You realize when this debate happened last week, they thought coming off impeachment with the articles being presented, that this was gonna be a barnburner! They thought this was gonna be a launching pad for the anti-Trump movement for this election year, 2020 — and it landed with a dud that not even Democrats in the media and in elected politics could ignore. 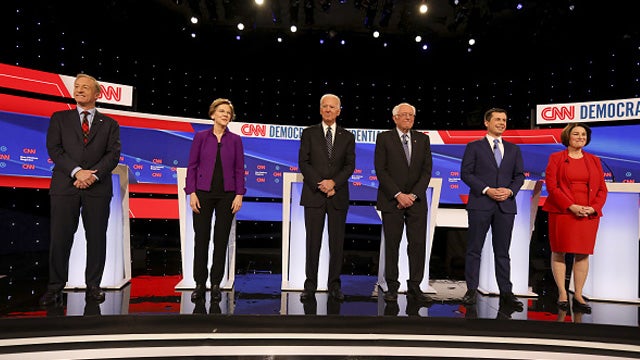 CLAIRE MCCASKILL: A whole lot of people, find all of this tedious and boring.

GAYLE KING: A lot of people are calling it a snoozer.

ROBBY MOOK: I found this debate quite subdued.

ROSANNA SCOTTO: (background noise) It was a little boring.

STEVE DOOCY: Why was it so boring?

DONNA BRAZILE: It was boring. It wasn’t as excitin’ as some of my Netflik (sic) horror thrillers.

TREVOR NOAH: Today’s debate wasn’t that exciting, and I guess this is what happens when you only have white people at your party.

AL SHARPTON: I didn’t see anybody on the stage, that really said, “I’m taking charge. I can be president. I can take on Donald Trump.”

RUSH: That last there was Al Sharpton minus the bullhorn. Let me tell you who these people were. The first voice was Claire McCaskill, then a noted leftist journalist named John Heilemann, “Dull debate, dull and plodding,” Gayle King, The Oprah’s best friend, “A lot of people calling it a snoozer,” David Axelrod, “Very much sort of low energy.” Steve Doocy, “Why was it so boring?” It was Donna Brazile that doesn’t know what Netflix is.

Donna Brazile said it was boring (imitating Brazile), “It wasn’t as exciting as some of my Netflick, uh, uh, horror, uh, thrillers.” And, of course, the late-night so-called comedian Trevor Noah, “Today’s debate wasn’t that exciting. That’s what happens when you have only white people at your party.” Old white people to boot. Here is Van Jones, and this is the primary take-away from every Democrat. He was speaking after the Democrat debate on CNN last week.

JONES: Tonight, for me, was dispiriting. Democrats gotta do better than what we saw tonight. There was nothing I saw tonight that would be able to take Donald Trump out. And I want to see a Democrat in the White House as soon as possible. There was nothing tonight that, if you’re looking at this thing, you’d say any of these people are prepared for what Donald Trump is gonna do to us.

RUSH: Van Jones: There’s nobody on this stage we saw that can beat Donald Trump. There’s nothing new about that. What were they hoping for, a miracle? “Tonight, for me, was dispiriting. Democrats gotta do better what we saw tonight. Nothing I saw tonight will be able to take Donald Trump out.” Hello, impeachment. And then CNN, after the debate last Wednesday night they released audio of Fauxcahontas and Bernie Sanders arguing after the debate.

WARREN: I think you called me a liar on national TV.

WARREN: I think you called me a liar on national TV.

Now, Bernie, let me get the transcript of this. I put it at the bottom of the page. Bernie Sanders said, “What?”

“I think you called me a liar on national TV.”

So here we have — and this is kind of incredible here. The CNN co-moderator Abby Phillip says to Crazy Bernie, “Senator Sanders, CNN reported yesterday, Senator Warren confirmed in a statement that in 2018 you told her that you did not believe a woman could win the election. Why did you say that?”

SANDERS: Well, as a matter of fact, I didn’t say it. And I don’t want to waste a whole lot of time on this, ‘cause this is what Donald Trump and maybe some of the media want. Anybody knows me, knows that it’s incomprehensible that I would think that a woman cannot be president of the United States. Hillary Clinton won the popular vote by three million votes. How could anybody in a million years not believe that a woman could become president of the United States?

RUSH: (imitating Sanders) “Oh, I didn’t say it. But I don’t want to waste a lot — I never said it.” So after Bernie denies it a second time, the moderator assumes that he said it in her follow-up question. Listen.

PHILLIP: So, Senator Sanders, I do want to be clear here. You’re saying that you never told Senator Warren that a woman could not —

RUSH: Okay, stop the tape, stop, stop, stop, stop. Look. I need you to really listen to this. I got a commercial break. This is the most incredible thing. So hang on. We’ll start this again.

RUSH: Okay. So here we are, which is Abby Phillip, one of co-moderators in the debate, she asks Crazy Bernie if he said to Fauxcahontas that a woman could never be elected pres, he denies that he said it. He denies it twice. After he denies it a second time, the moderator still assumes he said it, not denied it, but said it in her follow-up question to Fauxcahontas.

PHILLIP: So Senator Sanders, I do want to be clear here, you’re saying that you never told Senator Warren that a woman could not win the election?

SANDERS: That is correct.

PHILLIP: Senator Warren, what did you think when Senator Sanders told you a woman could not win the election?

WARREN: I disagreed. Bernie is my friend, and I am not here to try to fight with Bernie.

WARREN: But, look, this question about whether or not a woman can be president has been raised and it’s time for us to attack it head-on.

WARREN: And I think the best way to talk about who can win is by looking at people’s winning record. So, can a woman beat Donald Trump? Look at the men on this stage. Collectively, they have lost ten elections.

WARREN: The only people on this stage who have won every single election that they’ve been in are the women. Amy…

RUSH: Right. This is a microcosm of why it was just — it was painful.