Who Is Pencil Neck? Nobody Knows!

RUSH: Here’s the “Jeopardy!” sound bite where the contestants have no idea who Pencil Neck is. This is last Wednesday night, the 15th of January. This is during the Double Jeopardy round. The current champion, Veronica, and host Alex Trebek…

Adam Schiff was an answer on Jeopardy today.

Not a single person knew who he was. pic.twitter.com/SQObAMzxw7

TREBEK: His name is Adam Schiff.

RUSH: Nobody knew. They could not identify him. Now, stop and think about that for a minute now, folks. While you think about it, grab sound bite number 35. Just hit that.

TREBEK: In 2011, this radio pundit told his Dittoheads that he was deaf in his left ear and only had about 20% hearing in his right. Andrew?

ANDREW: Who is Rush Limbaugh?

MELANIE: Who is Rush Limbaugh?

VERA: Who is Rush Limbaugh?

RUSH: So there you have any number of questions over a wide variety of years, and everybody knew me. Everybody knew that I was the answer. Here’s Adam Schiff — who has been the star of the Drive-By Media for the last two years — and a leading contestant on “Jeopardy!” had no idea who he is, looking at a picture of him. What does that tell you? It tells you a number of things. 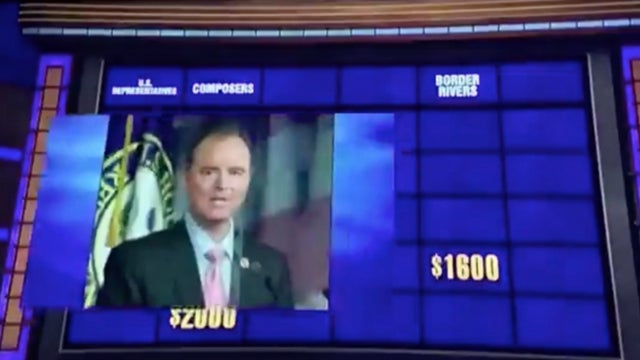 You can’t make too much about it, but you can make something of it, and it is that the Drive-By Media does not have all of that powerful influence that they think they have, and they probably don’t even have that sizable an audience. Well, we know CNN doesn’t. CNN’s ratings for that debacle of a debate were even lower than they have been. CNN’s getting into negative territory now with audience levels, particularly on special Democrat Party events.