Donald J. Trump: The First President to Attend the March for Life

RUSH: A pretty big first is on the verge of happening in Washington, D.C. Every year during this month at this time there is an event called the March for Life, the March for Life rally in Washington, D.C. A bunch of pro-lifers show up, and it’s always a gigantic, well-attended event. No U.S. president has ever appeared in person. They always appear via video conferences. Ronaldus Magnus appeared on a big screen behind the stage. The Presidents Bush did the same. Vice President Pence has been there in person. 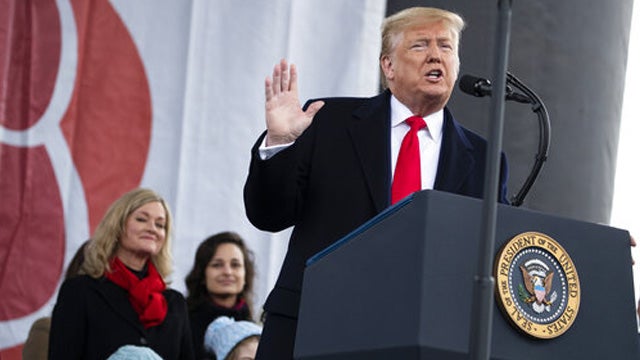 I’m not sure… Other vice presidents may or may not have gone in person. But Donald Trump’s gonna be there in person. He’s there now. He’s been there standing at the podium with literally hundreds of thousands of people gathered. It’s a huge rally. It’s a huge march. I would not be far off if I were to remind you that, at a time in his life, Donald Trump was not pro-life. It might be a stretch to say… He was never a pro-choice activist.

He’s never a pro-Planned Parenthood type. But, as a celebrity and a New Yorker in a sea of liberalism, when the subject came up, “Yeah, woman’s right to choose. Fine with me.” He has undergone a major transformation to become a pro-life activist, and is the first president to ever personally appear at the pro-life march. In the midst of this impeachment, he’s not hunkered down in the White House. This is gonna redound to his benefit as much as anything his lawyers say.

RUSH: Trump’s on fire at the pro-life rally. I’m not going to JIP it. We’re rolling audio on it. We’ll have some sound bites for you as the program unfolds. But don’t doubt me. There’s a number of Republican senators there as well. Mike Lee and James Lankford are there, and some members of the House of Representatives. But I’m telling you, something like this, the pro-life rally… You know the pro-life political issue — and it is one — has never been 50-50. The number of Americans that are pro-life is a majority over those who are not.

I don’t think it’s even been as close as the conventional wisdom narrative manufacturers would want us to believe. But this contrast of Trump speaking as the first president ever to appear live at a pro-life rally compared and contrasted to this Chihuahua nipping at his knees and ankles impeachment fight over there? Believe me, this is the kind of thing that makes an impression that’s indelible in the minds of the American people.

RUSH: I just want to say one more thing on this pro-life business, folks, because I made the point mere moments ago. Donald Trump back in the day when he was hosting The Apprentice and the days prior to that, as a New Yorker, he was never known as a pro-lifer — and it was not specifically pro-choice. He was not an activist either way on the issue. But as a New Yorker, he took the path of least resistance: Women’s right to choose. Whenever it came up, that’s what he was for. That was the path of least resistance — and this is important.

Now, stick with me. It was the path of least resistance for anybody to take who wanted to stay out of that or any other political controversy. It’s why people who were adamantly, publicly, proudly pro-life were so attacked. Look how this movement, though, has been overwhelmingly successful. If you go back, when this program started back in 1988 with the Republican convention (and four years later, 1992 in Houston) had to give way to pro-choice Republican women and had to give them a forum.

In fact, Roger Stone’s wife at the time, Ann Stone, was one of the leaders the movement, and they were constantly pressuring Republicans. You had a bunch of pro-choice Republicans. Do you remember…? I’ve told the story. I was a guest at a party hosted by a bunch of Republican estab — well, a Republican establishment couple, and a bunch of big time Republican fundraisers. One of them took me aside after dinner and said, “What are you gonna do about the Christians?” Remember this story?

He said, “The Christians! They’re killing us. They’re wiping us out.”

“Abortion! They listen to you, and you gotta get ’em to calm down. We can’t… We’re never gonna win elections, we’re never gonna win, if this is something the Republican Party’s identified with,” and then the same people would hit me up about gun control. Now, here we are in 2020, and guess what? That wing, the so-called pro-choice Republican wing? You can’t find it anywhere. All of those people that asked, “What are you gonna do about the Christians?” meaning, “How are you gonna get this issue out of our party?” are gone.

One guy confided (and I’m not making it up) that he got tired of his wife nagging him about it. Another guy said he didn’t want to go to any more Republican conventions with pro-life people ’cause they embarrassed him. But now, where are those people? I mean, the pro-choice Republicans may be still around, but they’re docile, they’re quiet, they don’t make much of it — and you know why? Because the Republican Party can’t win anything without their votes.

There are, at bare minimum, 24 million evangelical votes in America and maybe more — and guess who owns them (and long before today)? Donald Trump. Guess who didn’t abandon Trump at any time during the presidential campaign 2016? Evangelical Republicans. Despite the best efforts of the Drive-By Media, the pro-choice Republicans, pro-choice Democrats, they couldn’t. Why? ‘Cause those people know. They know where Trump is, they know where his heart is on this, despite what may be said on an indiscriminate video from years ago made exiting a talent trailer in Hollywood.