RUSH: Here is Jim in San Francisco. Great to have you, sir. Thank you for waiting. Hi.

CALLER: Hey, Rush. Adam Schiff needs to be taken down. This trial cannot close until this man has been exposed. He needs to be eviscerated. He needs to be humiliated. He needs to be shamed. He needs to give the citizens of Burbank every single reason to vote him out of office. Now, I agree with your analysis that probably Nadler blew it with Republicans and there’s no chance of witnesses. However, Rush, the rules state there’s 24 hours of uninterrupted talk by the Democrats, and then it’s gonna be followed by 24 hours, starting on Saturday, by the Republicans.

So far, John Roberts has acted like basically a chess timekeeper. He just sits up there. You know, and the rules… Actually, McConnell made him basically only a figurehead, that he can’t make any decisions of substance. Following the Republicans’ 24 hours, we then have 16 hours, 16 long hours. Think about it. That’s two full days of questions and answers, and you don’t just get to stand up and ask a question. You have to write it out on a three-by-five card, you have to hand it to John Roberts.

He reads it from the bench, and then somebody on the other side, presumably the House managers, answers. Well, Adam Schiff is in the well. We don’t need to subpoena Adam Schiff. He’s right there. I think that what needs to happen is we need to expose him with our questions. I want to see him exposed more than Hunter Biden or more than Joe Biden or anybody else, I want… You know, Rush, Adam Schiff is the singular most depraved, cynically awful politician that I’ve seen in my lifetime — and I’ve seen a lot of them in my 61 years.

But he needs to be taken down. Now, let me ask you this. How is John Roberts gonna control this? Because right now there’s no rules. He sits like a bump on the log. You ask a question, a Democrat gets up and gives a-two-hour, wandering reply that has no point. You know, what’s John Roberts gonna do? Is he gonna go through these three-by-five cards, decide which ones are relevant, which ones are not? How is he gonna control an uncooperative answer. You know, what’s the rules on this? It could get out of control really quick.

RUSH: Well, I think that’s… First, let me endorse your statements on Schiff, and I have said much the same thing. In fact, I have here some audio sound bites of a clip of mine from earlier this week about this very thing was used by some cable news networks to highlight and to get other people’s reactions to my opinions of Schiff which parallel yours. I think the guy’s despicable. I think it’s so bad, some kind of penalty needs to occur to this guy, some kind of comeuppance or punishment. I don’t know how. As to your questions about procedure here in the Senate when we get to Q&A 16 hours, I think — and I’m gonna have to take a break. Can you hold on just a couple of minutes during the break, ’cause —

RUSH: — I have failed to conclude or close the loop when I was explaining earlier what I think Nadler has really going on.

RUSH: We’re back here with Jim in San Francisco.

RUSH: Look, before I get to closing my loop here with you, I just want to substantiate what you are saying. I think if we ever do get to this Q&A period (I have my doubts that we will, but we’ll see) I agree with you. I think that is the way Adam Schiff should be set up and situated so that he lies under oath.

CALLER: Well, Rush, right now, right now, you’ve got the ear of politicians and senators that listen to you. So this is the word going out that we need to make sure that they’re gonna establish these rules. They’re gonna probably start working them over the weekend. John Roberts, we need to control him, and the Democrats are gonna work and try to construct rules that are gonna ban Republicans from asking questions (crosstalk) leverage.

RUSH: Well a second, now. Wait. How do you we control John Roberts? Mitch McConnell runs the Senate.

RUSH: The chief justice does not run the Senate. You’ve already stated he’s acting as a figurehead in there. He’s “a chess timekeeper” is all he’s done so far. 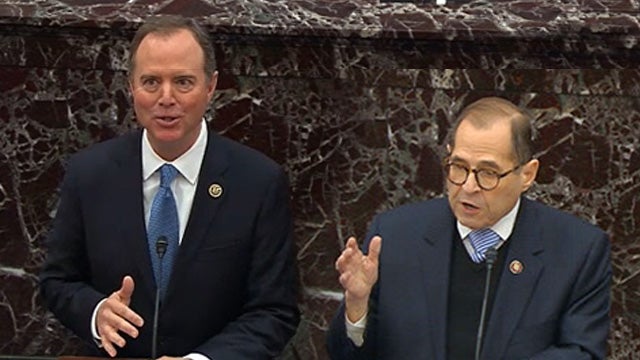 CALLER: That’s right. But basically, up until now — up until these question-and-answers — he plays a passive role. But when it gets into questions and answers… For instance, if somebody asks a question and then somebody, a Democrat, gives a two-hour filibustering response, how is that controlled? If John Roberts a figurehead —

RUSH: Well, wait a minute. Look, that’s the future, and I don’t know how to control that or deal with it. All I can tell you is what you’re describing is happening now! They’re already filibustering with this case. The thing that irritates me as much as anything about this is that whoever’s running the Senate has let the Democrat Party convert the Senate into the DNC. That’s all this is. These people are making points that are way beyond the articles of impeachment.

They’re talking about things that have nothing to do with what’s in their case. They’re all over the board and they’re repeating it over and over and over again. This is nothing more than a never-ending campaign ad on TV under the imprimatur of impeachment in the United States Senate — and the Senate is sitting there and letting these buffoons in the House basically convert the chamber into essentially the Democrat National Committee.

It’s almost like they’ve been suckered. So then you have to ask, “Okay. They have to know this; so why are they permitting it?” and maybe they think that the Democrats are drilling nails in their own coffins by doing this. The ratings are plummeting each and every day, I have to tell you. That is incontrovertible, and it’s distressing the media. They’re talking about (impression), “Well, it’s — it’s — it’s a shame, because this should be watched by millions of people. This is more important than just an average television show,” but they can’t create any interest.

I have thought all along this thing should have been dismissed the first chance they had. Dismiss it. Close it down. But the objection is, “Well, Rush, that would make Republicans look unfair.” Screw this! I’m sick and tired of the premise being that the Republicans are the ones that are unfair, that the Republicans are the ones that have to go out of their way to prove that they’re nice guys. Screw that! We’re so far beyond that. The Democrats have made it known to everybody what a bunch of skunks they are.

The Democrats ought to be the ones worried today about being perceived as nice guys. They’re so over the top here, and have been for three years and counting. The idea that they’re the ones that appear reasonable and they’re the ones that appear as though they’ve got their act together and the Republicans gotta go overboard and the other way (sniveling), “Making sure everybody realizes it; nobody confuses the Republicans for racist, sexist, bigot, homophones,” all that usual cliched tripe.

I think it’s a joke what these people are doing. There’s no truth coming out of these people’s mouths on the Democrat managers’ side — and, by the way, the news is that hardly anybody in the Senate’s listening. They don’t have their phones in there (sigh), but a whole lot of people are not really paying attention.

RUSH: So Pencil Neck is back up there now. I guess when things are not going well he goes in and commandeers the floor. And he’s now explaining why it is that if the president did not foresee enough importance in giving aid to Ukraine, didn’t care about Ukraine, only cares about himself, now he’s explaining to people why does Ukraine matter anyway. And of course they’re gonna say Ukraine is a buffer for Russia.

These clowns did not do anything to help Ukraine when Russia commandeered Crimea, basically took it. That’s one-third of the country. But Joni Ernst, Republican senator from Iowa, came up with something interesting. She found out that four of the House managers who were going on and on and on and on and on about how Trump didn’t care about Ukraine, Trump leveraged Ukraine, Trump only wanted Ukraine to investigate Biden.

Remember Ukraine got its aide in a matter of days and it got more than it was actually promised it was gonna get. But what Joni Ernst discovered is that four of the House managers voted against legislation providing this very same aid to Ukraine that they’re bellyaching about. They are Jerry Nadler, Zoe Lofgren, Hakeem Jeffries. They voted against the most recent National Defense Authorization Act, which included aid to Ukraine.

Now, there’s four she mentioned. There’s only three named. So I don’t know who the fourth is. Nadler, Lofgren, Hakeem Jeffries, and maybe Nadler voted — I don’t know. But there’s one missing. Anyway, does that matter to anybody? These guys are bellyaching and whining and moaning about how Trump didn’t even care about Ukraine. He didn’t care about Lieutenant Colonel Vindman’s talking points. He didn’t care about our vested and respected ambassadors and civil servants who are preparing their talking points.

And Ukraine ends up getting more than what they asked for, yet these people voted against Ukraine getting anything. And they’re acting like that very fact that Trump denied Ukraine threatened national security, but Ukraine got its money; they voted against it.

RUSH: Okay, I’m gonna have to run this down. I’m just watching here. I didn’t have the sound on and didn’t have the chance to switch it. But it looked like that Schiff and the boys played a video clip of John McCain as a star witness. I have no idea what the context was. But that must be the scraping the bottom of the barrel to go out and get McCain. That’s a…

Well, we’ll see how that works. First, I have to find out what it was that they have McCain saying. (impression) “I think Trump sucks! I think Trump’s a — a bad guy. I wish the dossier had been true! I wish it had been true. I tried to make the dossier true and it wasn’t true, but I’m the guy… I’m the guy that spread it.” I don’t know what they have McCain saying.