RUSH: Now, there has been fallout, ladies and gentlemen, from yesterday’s audio and videotape of what happened on CNN, Rick Wilson, the Republican consultant. You know, I guess I’m wrong. I thought this guy worked for McCain or some McCain-like Republican. Apparently, the last Republican he worked for was Giuliani in 2000, best anybody can determine. Anyway, Rick Wilson — and he was the guy making fun of Trump voters on CNN Saturday night along with a New York Times reporter and Don Lemon, of CNN, who was laughing hysterically and uncontrollably.

There has been a tremendous amount of fallout.

RUSH: As I mentioned, there has been a lot of fallout to the CNN segment on Saturday night where Rick Wilson and Don Lemon and some other guy from the New York Times were literally making fun of, mocking, and laughing at Trump voters as a bunch of hayseed hicks who are incapable… (impression) “Yeah, they think they’re so smart. They got their geometry; they got their math. We’re the ones… We’re the smart ones. It’s you elites that don’t know what you’z talking about, you elites. You — you — you’re the real scum out there.”

Meaning the Rick Wilsons and all of these others — the Never Trumpers and all the other people — who engage in this, they’re supposedly the compassionate ones. Isn’t it amazing? These are the people that tell us Trump is unqualified ’cause he’s got bad manners, because he talks in ways that are unacceptable, and these people go out and actually say far more insulting, mocking things than Trump does.

It really is stunning. They say (impression), “Trump is offense to basic civility. Trump is an offense to basic manners,” and then you look at all of these people that hate him, from the intellectual Never Trumpers to the intellectual erudite media and so forth, and they’re just the epitome of what they criticize — and it was on full display Saturday night on CNN. The president issued some blowback on it as well. 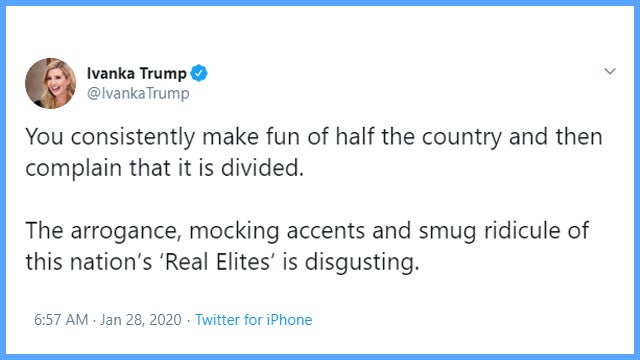 And yet the very people who engage in those kinds of claims and criticisms themselves descend into the very behavior they mock and criticize. For his part, Trump shredded Don Lemon, called him “the dumbest man on TV.” I wonder where he heard that? That’s been my title for Don Lemon ever since I heard him say that the missing Malaysian airliner could have been swallowed up by a black hole. Anyway, the president was just savaging CNN and Don Lemon for putting all this on.

Now, Rick Wilson, as I say, I tried… I’m confusing him with somebody. I know I’m confusing him.. There’s somebody out there that worked for Denny Hastert that has moved on to some other people. His name’s Rick or John or something. These guys are so interchangeable that I get ’em confused. But this guy Rick Wilson that was on CNN Saturday lives in Tallahassee. (impression) “He looooves dooogs. He loves to go hunting out there.” He hates Trump.

ANNOUNCER: Martha McSally, Arizona rejected you in 2018, and you know why! You were too close to Donald Trump — and you lost, badly. Now, you’ve gone full Trump, again.

MCSALLY: Manu, you’re a liberal hack. I’m not talking to you.

ANNOUNCER: You knew Arizona wanted the truth. We demanded witnesses and evidence in the trial of Donald Trump. There’s a reason your poll numbers are dropping fast. Arizona has always produced mavericks, true independents, people like John McCain and Barry Goldwater — senators that served Arizona, people of courage, toughness — and you, Martha? You’ll be remembered as just another Trump hack.

RUSH: So that’s Rick Wilson, and his outfit produces that ad against a Republican. He’s supposedly a “Republican consultant,” a “Republican strategist.” That’s how he’s labeled on CNN. Well, let’s go back. Here is what happened on Saturday night on CNN Tonight with Don Lemon. It is… Remember Pompeo really lashed out at an NPR reporter who lied to him about the subject of an interview and lied to him about the conversation after the interview being off the record?

He told this NPR reporter that he was insulted, didn’t let her back on the airplane to cover him and said, “You don’t even know where Ukraine is on the map. Tell me where it is,” and she could not identify Ukraine on a map. The NPR reporter thought Ukraine was in Bangladesh. So that news was treated this way on CNN, talking about how stupid Trump couldn’t find Ukraine on a map. Anyway, this was a blowback to Pompeo and the way he dealt with the NPR reporter…

WILSON: Donald Trump couldn’t find a Ukraine on a map if you had the letter “U” and a picture of an actual, physical crane next to it. 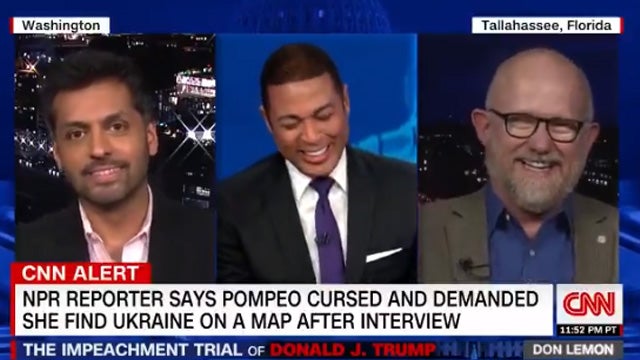 WILSON: — um, that — that — that that (stereotypical southern accent) “Donald Trump’s the smart one and they’re all — they’re… Y’all, y’all elitists are dumb.”

ALI: (mocking a Trump voter) “You elitists with your geography, and your maps, and your spelling. Even though my –”

WILSON: “And your math, and your readin’.” (laughing)

ALI: “Your geography. Knowin’ other countries. Sippin’ your latte.”

WILSON: “All those lines on the map!” (laughing)

ALI: (laughing) “Only them elitists know where U-kraine is.”

RUSH: Oh, yeah, mockin’ Trump voters as being totally idiotic and hayseed, hick types. Now, the New York Times reporter — as this thing went on — finally got a clue. “This is not looking good for me. I shouldn’t be doing this,” but it was too late. So there’s been so much blowback on this that Don Lemon has had to go into CYA mode, and this is what he said last night on his show on CNN… 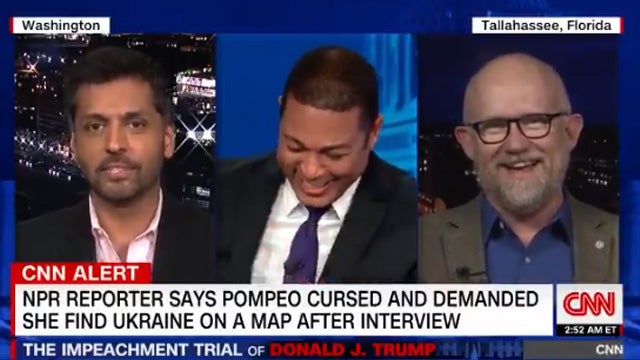 LEMON: This is personally important to me to address this, okay?

LEMON: Anyone… Ask anyone who knows me.

LEMON: They’ll tell you! I don’t believe in belittling people —

LEMON: — belittling anyone for who they are —

LEMON: — what they believe, or where they’re from. During an interview on Saturday night, one of my guests said something that made me laugh — and while in the moment, I found that joke humorous, and I didn’t catch everything that was said.

LEMON: — I was laughing at the joke — 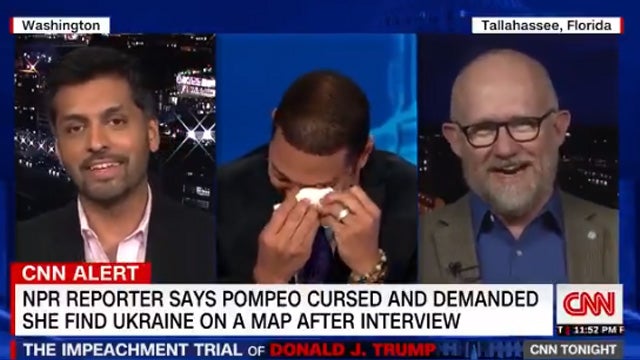 LEMON: — and not at any group of people.

RUSH: Oh. So we now have an out. If somebody tells a joke that’s racist or bigoted, we can laugh at it and we can say, “Yeahah, we’re not laughing at the people. We were laughing at the joke.” What? The joke is about a group of people. I’ll tell you something else. Don Lemon does belittle people. He calls Trump voters neo-Nazis. He calls them racists. He belittles people. All of CNN does. There isn’t anybody on CNN that does not engage in this kind of behavior. I mean, it’s what CNN has become known for.

“This is personally important to address this, okay? Anyone — ask anyone who knows me.” That’s the first giveaway. You can’t speak for yourself. Who you are doesn’t tell us who you are. We have to go ask people. You know, Mr. Lemon, that’s not very few away from, “Hey, I know some black people. I can’t be a racist. You go talk to ’em! They’ll tell you. I’m their friend.” That goes over like a lead balloon.

They turned this whole thing into an ad with other Democrats trashing Trump voters, and we have the audio for it here. It’s audio sound bite number 9. It runs about a minute. Now, it’s a TV ad, so some of the video, obviously, is gonna be missing here. But you’ll get an idea of how the GOP decided to put — the RNC put — this thing all together into an ad, the theme of which this is what they really think of you. This is who they think you are…

WILSON: Donald Trump couldn’t find a Ukraine on a map if you had the letter “U” and a picture of an actual, physical crane next to it.

HILLARY: …you could put half of Trump’s supporters into what I call “the basket of deplorables.”

WILSON: And so, that’s partly him playing to their base…

BUTTIGIEG: Anyone who supported this president is, at best, uh, looking the other way on racism, at best.

WILSON: Uh, you know, the — the — the credulous Boomer, rube demo that backs Donald Trump that wants to think that —

WILSON: — um, that — that — that that (stereotypical southern accent) “Donald Trump’s the smart one and they’re all — they’re… Y’all, y’all elitists are dumb.”

ALI: (mocking a Trump voter) “You elitists with your geography, and your maps…”

BIDEN: …issue of — of racism across the country, because that that’s his base.

WILSON: “And your math, and your readin’.” (laughing)

ALI: “Yeah, your readin’, you know? Your geography. Knowin’ other countries…”

RUSH: It fades out, and the graphic on the screen is, “They think you’re a joke. Prove them wrong in November.” You heard Hillary Clinton in there. You heard Mayor Pete. He’s the one who said, “Anyone who supported this president is, at best, looking the other way on racism, at best.” It was Chris Matthews who said, “Trump always loves the low-information guy.” And then the New York Times reporter, Wajahat Ali. And Plugs Biden was in there. So they put the ad together pretty quickly, and it’s effective.