RUSH: It is so pleasing. I have to admit, it is so satisfying to see all of my predictions about what the Democrats are gonna do come true. Even after 31 years, folks, it still provides imminence pleasure when I am able to tell you in advance what they’re gonna do, and then they do it. What I’m specifically talking about is Chuck You Schumer. We just heard Chuck You Schumer lay out what the Democrats are gonna be saying from now to the election.

And the rub is, these people do not even want witnesses, is the bottom line.

We got some audio sound bite evidence of that.

RUSH: I mentioned in the first hour that I can show you that I am right that the Democrats really don’t want witnesses. Now, the media does. The media’s a whole different ballgame. The media wants witnesses. The media’s convinced that they can get a conviction. They are convinced they can get Trump thrown out of office in this impeachment trial. They’re fit to be tied that the Democrats are not gonna see this through. So just to remind you, this is what I said about witnesses yesterday. The audio sound bite number 4.

RUSH: Okay. Now, I said that… That was yesterday on this program. So when I say it… This is a strange thing. It’s the way this happens. When I say it, it enables other people to go ahead and admit it. When I break the ice, when I go ahead and explain what’s what, then a lot of people feel freed up to echo the claim, knowing they can always blame it on me if it ends up to be incorrect.

This is a classic example of being on the cutting edge societal evolution. So yesterday afternoon on ABC special coverage of the impeachment trial of President Trump, we had the anchor George Stephanopoulos talking to the chief White House correspondent Jonathan Karl, and the question to Jonathan Karl: “Do you get the sense McConnell has a very good idea where this is going?”

KARL: Frankly, George, I really don’t get the sense that the Democrats either want the witnesses that they want or they don’t want witnesses. They don’t want to see any talk of the Bidens coming in the Senate, which is what the Republicans will be talking about with a deal. 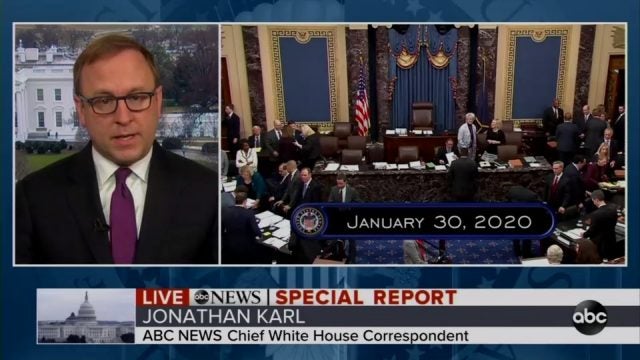 RUSH: What was that? Did you hear them at ABC? “I really don’t get the sense that the Democrats either want the witnesses that they want or they don’t want witnesses. They don’t want to see any talk of the Bidens coming in the Senate…” So next we go to CBS. “CBS Special Coverage: The Impeachment Trial of President Trump,” and here’s the anchor, Norah O’Donnell, talking to former Hillary campaign manager Robby Mook. She said, “We put up on screen the three Democrat senators there who could vote with Republicans for acquittal, and that would allow the White House to say, ‘This a bipartisan acquittal.’ Is that the worst nightmare for the Democrats?”

MOOK: I don’t think this is gonna be a big part of the election. I think the election is gonna be litigated over people’s economic reality, over big questions like leadership, commander-in-chief, so on and so forth. I think the Democrats are gonna want to move on. … Democrats are gonna move on and talk about people’s economic reality. Has the country gotten better? Do you want this man’s finger on the trigger of our nuclear arsenal? 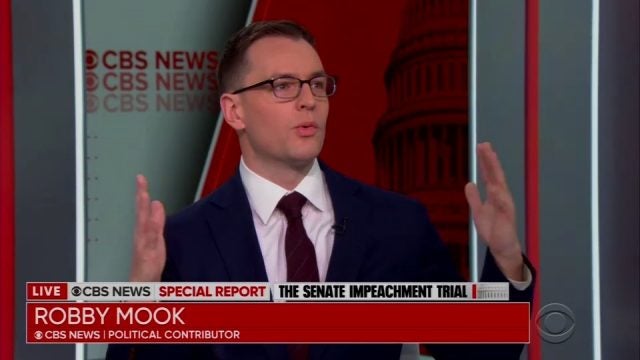 RUSH: Did you hear that? Not only do they not want witnesses, they want this thing over yesterday. They don’t think… This is Hillary’s campaign manager; he doesn’t even think this is gonna be part of the campaign, that they’re somehow are gonna beat Trump (laughing) on running the economy, or Trump’s finger on the nuclear launch code button? “I don’t think this is gonna be a big part of the election. I think the election’s gonna litigated over people’s economic reality”?

What is their economic reality, Mook? It’s such a damn sight better than it was during the eight years of the Obama administration. Anyway, the fascinating thing here is, “I don’t think they’re even gonna be talking about this in the campaign. ” The bottom line is, whether this guy’s right or wrong about that, they don’t want witnesses.

That’s what CNN sees when there is a meeting on the coronavirus convened.

RUSH: Here, move on to sound bite number 8. This is Alisyn Camerota, CNN this morning. CNN has just found out in this sound bite that Trump’s approval numbers continue to go up during impeachment.

CAMEROTA: His approval rating, they’ve gone up since the impeachment process began October 2019. This is Quinnipiac University. He’s at 38%; now he’s at 43%. You saw the same thing happen with President Clinton. What is that! What is that, the Americans approve of the president when more information comes out — out about what they’ve done wrong? 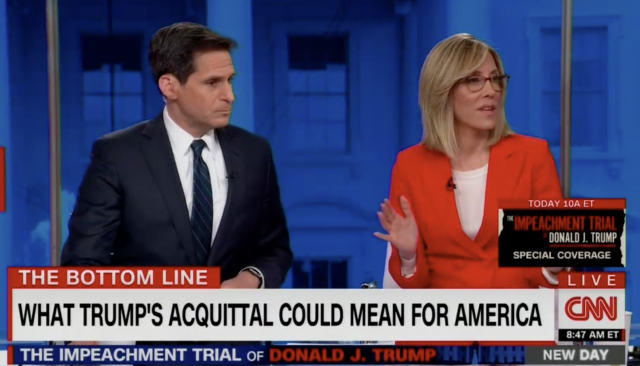 RUSH: Totally disconnected from the country — and after three years, they’re still in denial. They have no… See, to them, it made perfect sense that Clinton’s numbers would go up during impeachment ’cause everybody hates the Republicans. But they can’t understand how Trump’s numbers are going up when they think everybody hates Trump. So here is Joe Lockhart, the former press secretary for Clinton, former press secretary for the NFL for a while, and I guess… Da-da-da. I don’t know if this is in response to Camerota or not, but let’s listen and see what he’s talking about.

LOCKHART: What happened with Bill Clinton, there is a rally around your guy, you know, among your base. But I don’t think that this significantly changes his position as he goes, uhh, to face the voters. He has his base. He has done nothing to expand his base in three years, and that’s a problem for him.

LOCKHART: Democrats have an opening —

LOCKHART: — over the next eight or nine months, which is —

LOCKHART: — and it’s a two-pronged attack on Trump — which is, A, he doesn’t care about you. He cares about himself. He hasn’t really helped you; secondly, he’s corrupt.

They can’t stand it.

And Trump’s base has expanded. What do you think a rising approval number means? His base is expanding. Lockhart, do you see the crowds wherever Trump goes compared to no crowds where any Democrat goes? He hasn’t really helped people? How about eight years of Obama and the people being told, “Well, you gotta let all these illegals in. We don’t have any choice. They’re doing jobs the Americans won’t do. We need ’em to come in. Stop being a racist! Stop being a xenophobe. We’re not in crisis.

“These people are better Americans than you are!” That’s what we were told during Obama’s years on illegal immigration. “Those people are probably better Americans than you are,” they said. Then they said, “The economy’s in decline. Our best days are behind us. You need to get used to the fact that economic growth ain’t gonna be what it was.” “You people in Ohio and Michigan who lost your jobs? Those jobs aren’t coming back,” Obama said, but they’re back now. What do you mean, he doesn’t care about people, Lockhart?

What do you mean he hasn’t really helped people? And “second, he’s corrupt”? Corrupt? The American people have been watching full-fledged corruption on full display going on four years now at the FBI, the intelligence agencies, throughout the law-enforcement apparatus. Corruption? Trump? You guys haven’t made that case, despite trying.

RUSH: Here is evidence again — and I just want you to know, as I’ve been telling you all week, that the primary objective here is to dirty the acquittal, dirty it up, make it have an asterisk, suspect. “It’s illegitimate like the whole President Trump presidency is! It’s because of partisanship. The Republicans don’t want to hear the evidence,” whatever it is. Here’s Chuck You Schumer making the case today. Number 12, sound bite number 12, three, two, one…

SCHUMER: If my Republican colleagues refuse to even consider witnesses and documents in this trial, this country is headed towards the greatest cover-up since Watergate.

SCHUMER: What will the president conclude? 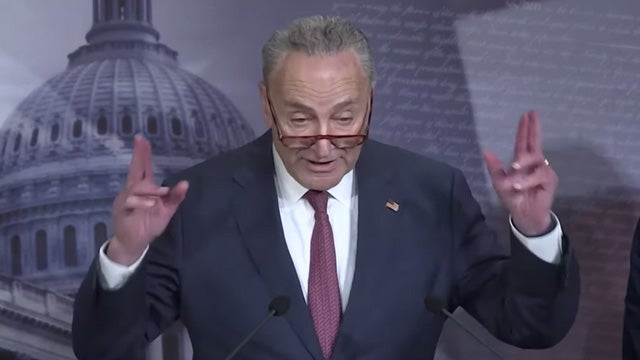 SCHUMER: We all know. He’ll conclude he can do it again, and Congress can do nothing about it. He can try to cheat in his election again. If my Republican colleagues refuse to consider witnesses and documents in this trial, the president’s acquittal will be meaningless.

SCHUMER: There will be a permanent asterisk —

SCHUMER: — next to the acquittal of President Trump written in permanent ink.

RUSH: “[T]his country is headed towards the greatest cover-up since Watergate. What will the president conclude? We all know. He’ll conclude he can do it again, and Congress can do nothing about it.” He didn’t do anything! It remains (laughing) the most amazing aspect of this. He didn’t do anything, and yet all of Washington is captivated by it. He didn’t do anything. He did not do what these allegations are. “Yes, he did, Rush. He really — he really wanted Ukraine to investigate.”

But they got it!

This is Realville, Literalville. This ain’t Washington. That makes no sense to anybody that has even a smidgen of common sense. The only way it makes sense is if people understand the abject hatred that the Democrats have for Trump.