Dittoheads on What Rush Means to Them

RUSH: This is Duane in Boston. Great to have you, sir, the EIB Network. Hello.

CALLER: Blessings to you, Rush. How you doing?

CALLER: The reason why I called, been listening since high school. I’m 54 now. My mom gave me a book of yours in high school, and I was talking about it online the other night after you got your award. I’m an African-American Christian, but I’m conservative. So, you know, I’m automatically a pariah in certain circles.

But I was talking about how me and my fellows need to keep you lifted up in prayer and cover you and your family and your wife and stand with you while you go through, because I believe you’ll come out on the other side victorious. And while I was doing that, a guy started go in on me and my mom. My mom’s been dead since 2010, but he said, “Oh, your mom gave you a Rush book? Did she give you a Karl Marx book as well or a Jim Crow book, too?” and “Your mother got buck teeth,” and he started —

CALLER: There is none.

CALLER: The guy was just an idiot. And then, of course, people would retweet it. And at first I started to delete them, and then I said no, I’m gonna let people see how ignorant and stupid these people are, right? Because I guess what really ticked him off is when I said that Rush is a gift to this generation. And some people won’t get it until — you know, ’til some time goes by. But God sowed a seed in the earth named Rush Limbaugh. And they just went crazy. I guess I’m not supposed to speak up and speak my mind because I’m a black man.

RUSH: Isn’t it kind of fun to drive ’em crazy?

RUSH: I’ve been having fun doing that for 30 years. Believe me, it is a lot of fun.

CALLER: I don’t know. That’s around the time I started listening too, because my mom asked me what I wanted for Christmas, and I was too old to really, you know, get those kind of requests. I said, “Give me a Rush Limbaugh book.” And she gave me a book, and I’ve been listening ever since.

RUSH: Well, that’s awfully sweet, sir, very nice. And I thank you very much. It’s great to know that people like you are out there, and it means more than you will ever know. I’m glad you got through today.

CALLER: Thank you, Rush. I want to let you know we’re holding you close in our prayers.

RUSH: Thank you. Thank you very much. Appreciate it.

CALLER: You’re welcome. I have a question. I need you to clarify a memory for me. My husband thinks I’m crazy. But years and years ago — and I’ve been listening to you for a good 25 years — I remember, or I think I remember, Chris Matthews as a guest host substituting for you on your show. Now, did I dream that? 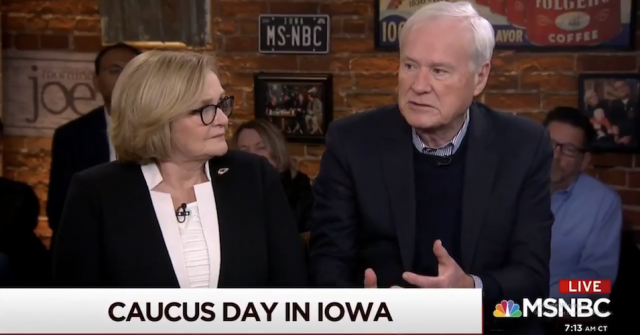 RUSH: Nope. Nope. That actually happened. He was a guest host a couple times.

RUSH: You are absolutely correct.

CALLER: (laughing) Do you know what year it was?

RUSH: This was back in the days when Chris Matthews — he was a good friend. Chris Matthews, I’ll tell you this little story. Many of you have heard it. It was a ’93 White House Correspondents’ Dinner and Clinton tells a joke about me being a racist for defending Janet Reno when she was attacked by John Conyers. Clinton said “a black guy.” (imitating Clinton) “He only defended her because she was being attacked by a black guy.”

And Chris Matthews came up to me at the end of the night, “You cannot, you cannot let the president of the United States get away with calling you a racist in this room and on national TV, you can’t do it. That’s absurd.” He was outraged by it. Now he probably agrees with Clinton. Who knows. These are the people that have gone through the massive transformation.

Folks, I’m very proud of something. I know it’s true. I haven’t changed. My core beliefs have not changed in 31 years. You have no reason to ever doubt what I believe about things. I’m talking about core beliefs. There might be subtle disagreements with little tax policy here and there, but the core of conservatism, not changed. Not sold it out. Not betrayed anybody. I have not left anybody hanging.

I’ve not kept people here for 25, 30 years or whatever under false pretense, and the Democrats, the left, they’re the ones that are constantly changing, becoming more and more radically liberal and socialist. And I think they make the mistake, as I’ve been saying, they assume the country is moving in that direction with ’em and they are so wrong. Do not doubt me. They are so wrong.

RUSH: Grand Junction, Colorado. This is Lauren. Welcome. Great to have you here. Hi.

CALLER: Good. Well, I just wanted to let you know just how much you’ve meant to me over the last 31 years, actually, of my life. I’ve been listening to you religiously for 15 years, but my memories go back to 1989, getting off the school bus in fifth grade and hearing your voice on the radio when I’d go into the garage. And my dad always had you on. And that was one of my fondest moments of him and I in [our] relationship, is when we would hear your voice on the radio. And you just mean so much to me and to him.

And in many ways, he was unable to kind of express the way he would feel towards me and trying to express his love for me. And with politics kind of being the glue that kept our conversations together, you were always that voice, and you were always just so meaningful to us. I just wanted to thank you for that. So… just wanted to thank you for that, Rush. You mean so much to us. Me and my dad, we’ve been talking about you in recent days. And it’s been an emotional week this week, but we’re just praying for you, and we’re just really excited to see you win that medal. It was really —

RUSH: Thank you. I have to tell you, 31 years is a long time. And it is — well, I don’t know — mind-blowing, fascinating, whatever. So many people call here say they’ve been here for the whole time, 31 years. That means people start out, whatever age, 31 years later they’re still here. Now, I’m still here too. But it’s my job, and it’s what I love. It’s what I am most satisfied doing.

Thirty-one years is a long time. And there are incredible numbers of people who have been here 31 years. We have extensive audience research, folks. We know exactly who you are, where you live, how much you listen, what time you start, what time you stop, we got data on you that you wouldn’t even believe. But we do not use it to hunt you down, target you with advertising in the way Silicon Valley does. I’m just kidding. We don’t know who all of you are. But we do know quite a bit with the audience research.

Thirty-one years is a long time. Somebody starts out at age 25, and at 56 years old they’re still listening. You young hosts out there, do you realize how good you have to be in order to keep people tuned in for 31 years? I’m just having fun with you. I’m blown away by it. I’m in awe of it, and I’m the one who is grateful and thankful. I appreciate that, Lauren.

This is Jared in Ocala, Florida. You’re next, sir. Great to have you with us.

CALLER: I wanted to tell you first off, I thought it was fantastic that President Trump gave you that award. You deserve it. You earned it. And you’ve kept all of us on the right path listening carefully to what they’re trying to do here. I see it daily ’cause I’m out in the field working as a court process server, and I see people and their attitudes. But I can tell you it’s almost like the Democrats have become like the Mafia. And now it isn’t going their way ’cause they got a top cop that says no way, no more.

CALLER: Well, that’s how they behave, and they want it their way, and they’re totally, you know, look at it that it’s only their way and God forbid anybody stands up and thinks for themselves. They don’t want this country thinking for themselves. That’s the whole problem. And I think it’s all based on money with them. It’s all based on their pockets.

But you seem to care so much and show, and you’ve given your heart and soul. It gives a lot to all of us, and I wanted to thank you. And we’re here and we think about you every day. I do, and I’m so grateful for all the efforts you’ve done, and I hope you do well and stay tough. My dad suffered what you’re going through.

RUSH: Yeah, lot of people have, and it’s tough. But I’ve got a good medical team, I’ve got some great doctors, and they’ve already discovered some interesting things that should facilitate treatment. And by the way, so many people who want to share with me friends of theirs who have had excellent results here or there and please call ’em. I can’t tell you how much it is moving that so many people want to help. I cherish it, and I appreciate your comments very much out there, Jared.