RUSH: Here’s ABC, Jonathan Karl. Now, this happens every now and then. Trump had a rally Monday night in Manchester. Do you know what happened? Trump left that rally early to go to Dover, Delaware, to be there with the grieving families upon the arrival of two U.S. military personnel killed in Afghanistan. He wanted to be there personally. He says it’s one of the hardest parts of the job is military deployment, military death. Probably true of all presidents. 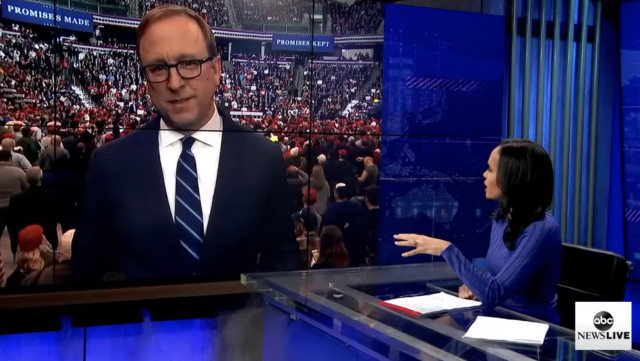 But at the New Hampshire rally it was like ’em all. You got 34 degrees, 30 degrees, people lined up 24 hours in advance, thousands more people lining up than will ever be able to get into the arena. And yet they are there, and yet they stay. And, apparently, the average case, 25% of those showing up are Democrats. And that figure is pretty much accurate for every Trump rally no matter where it is. And Trump will draw at a New Hampshire rally more people than all the Democrat candidates combined will draw in couple or three days.

Now, the Drive-Bys don’t tell you that because that’s devastating news. Donald Trump can go in uncontested. There’s not even a Republican primary to be concerned about, Trump is the nominee, there’s not gonna be any question about it. He goes in there and draws a bigger crowd than all of these Democrats combined. And the Drive-Bys have been seeing this and they’ve been trying to ignore it. “Well, crowd size at rallies doesn’t mean anything.” Still lying to themselves about a truth they should have been reckoning with for the past five years, if you count the campaign starting in 2015.

So Jonathan Karl of ABC News, he went to the Manchester Trump rally. And whenever these Drive-By Media people actually go get a visa to go to one of these rallies rather than just watch it on TV or read about it later, they more often than not are profoundly moved by it. Here is Jonathan Karl. This is last night on the ABC News website. He’s the White House correspondent. His reaction to Trump’s rally in Manchester last night.

KARL: Trump supporters are as fired up as I have ever seen them. I mean, this rally is in an arena that I was at just two nights ago, Saturday night at an event that included all of the major candidates for the Democratic nomination, and we have a bigger crowd here by far just for Donald Trump than we had on Saturday for all of the Democrats. Trump supporters are very energized. You’ve got the impeachment acquittal, good news on the economy, and Democrats coming out of Iowa seem to be in disarray. They feel like they’re on the winning side. And also, by the way, Trump’s approval rating has hit its highest level ever.

RUSH: Yeah, Trump’s approval rating is the highest it’s ever been. You’ve got 90% of the American people satisfied with things as they are. The Democrats are offering solutions to problems that don’t exist! The Democrats are actually talking about problems people don’t want to have. So they don’t want Democrat solutions to problems that don’t exist. Why create the problem just to get Democrat solutions?

Democrat solutions to these problems is what led us to the muck and the mire for so many years. The great thing here is in three years of sturdy, studied application of opposition policy, look how quickly this country can rebound from eight years of an Obama administration telling us, “It’s a new era of decline! America’s best days are behind us. You need to lower your expectations. Your job is not coming back if you’re in Ohio or if you are in Wisconsin,” and 25% of that crowd was Democrats.

There’s one more here. Nah, I gotta take a break.

Trump did his own version of Operation Chaos at the rally last night — which, of course, I admired.

RUSH: So here’s Trump at the rally, the Keep America Great rally in Manchester, New Hampshire, last night. This is his version of Operation Chaos.

THE PRESIDENT: We hear that there could be — ’cause you have crossovers in primaries, don’t you? So I hear a lot of Republicans tomorrow will vote for the weakest candidate possible of the Democrats. Does that make sense? You people wouldn’t do that. My only problem is I’m trying to figure out who is their weakest candidate? I think they’re all weak!

RUSH: Classic. Classic Trump. That right there is a microcosm of how Trump is entirely, totally different than your average Washington (or anywhere else) politician. That is the same attitude that Trump had when he said, “Hey, Russia? Russia, if you’re listening, maybe you could find the missing Hillary emails. There are so many people in our media looking for ’em.” He’s totally jabbing ’em, he’s totally jabbing them, making a big deal out of Hillary’s missing emails. 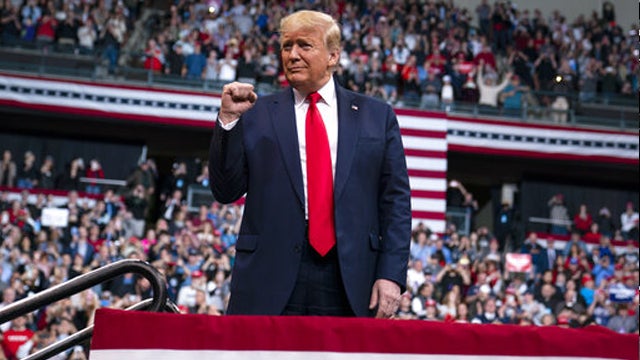 So he’s jamming ’em up with it, and now he’s jamming ’em about having nobody that can beat him and then helping the Republicans pile on. This is the kind of stuff that the Drive-Bys and the Democrats say (sputtering), “This is — this is dirty tricks! This is — this is despicable. This is… It’s a closeted message to the Russians,” and so forth. The key thing present here that they lack is a sense of humor, particularly a self-deprecating sense of humor.

CALLER: Hey, what’s going on, Rush? A quick two-part question for you that I think’s detrimental to this election. First part is, because this is something that I think that’s really gonna crush the Democrats if it gets passed, especially nonunion or union, is the infrastructure bill. Do you think the president can get that passed before Election Day?

And the second part of my question is, is it possible for him to have rallies in cities like where I live that are Democratic strongholds — New York, Los Angeles? Because I feel like when the other side is shown with their counter-protesting and all their nonsense, that that only emboldens us to vote for President Trump, and it’s only gonna make the case even better for him.

RUSH: He can do a rally anywhere he wants. There’s nothing that says he can’t. It would be a decision that would probably involve allocation of resources, meaning do they want to spend the money in a place where there might not be return on investment? But, see, I think one would be worthwhile.

I have long been an advocate that Trump do a rally in California. Plant the flag. Go out and plant the flag. I mean, even though the party affiliation is such that victory there seems hopeless, at least go out, plant the flag, and you never know what will happen.

The infrastructure bill, it’s gonna be tough only because it’s an election year, and the Democrats are not going to let anything happen that would benefit Trump, even if it will benefit them. The only things that are gonna happen legislatively, because the Democrats run the House, and the House is where all spending bills originate. And the only way anything coming out of there is gonna happen is if it hurts Trump.

It can help the Democrats, but it has to hurt. And the way they can define hurting Trump is by not helping him. And the infrastructure bill, you’re right. I mean, that would solidify a lot of union support. But I think Trump’s coalescing a lot of union support anyway. I think a whole mess of blue-collar voters have already moved in the Trump direction simply because of the direction of the economy and the status of people’s lives in general.

During this program today I have had CNN on here, and I’ve had Fox, which they’re the two I have on every day. And it’s the New Hampshire primary, and both networks are talking to voters, primarily Democrat voters, and they’re lining up people who were undecided; they’re lining up people who have chosen a candidate; they’re asking them why they’re voting for certain candidates and why they’re not and this kind of thing.

And I’m not as affected by this as I was when I was first starting out. When you first start out, politics is what it is. You go to where it’s happening, and you get enmeshed in it the way it is, and you find out after years and years and years the parts of it that are phony, the parts of it that are make believe, that are structured, that are not really true. I mean, there’s so much illusion. And there’s so much conformity.

There is so much conformity. Everybody saying the same thing, same analysis one way or the other, it all boils down to the same thing. And I began to notice myself distancing from it. And not because I wanted to. Just because more and more of what I saw and more and more of what I heard didn’t jibe, it didn’t make sense, it didn’t seem what I would say having just watched something.

And at first, I wondered, “Okay. Am I wrong? Should I trust myself, or should I go ahead and go with the flow here?” And as time went on, I began to be more confident and trust myself that my take on these things was far more correct than the conventional wisdom conformity. Because when you have conventional wisdom and conformity, what do you have? Uniformity of thought. And how many people are involved in this?

RUSH: So the Drive-By Media is interviewing all of these voters in New Hampshire, supposedly handpicked, randomly chosen. But there is a purpose. The purpose is to create this impression that it’s over for Trump, that it’s over for any Republican. Whenever there’s a Democrat primary going on, they go out and they find these primary voters and say, “These are the smartest! These are independents. These are centrists.

“These are people who weigh the issues.” It’s all a game, and yet everybody in this game plays this game like it’s all legit, like it’s not structured, like there’s not an outcome, like it is indeed all random — and it isn’t. It took me the longest time… Well, it didn’t take me that long. I’ve had this figured out about 20 years, and it really helps to be a nonconformist. Now, being a nonconformist can be a lonely existence, and God love conformists. We need conformists.