RUSH: Plugs is fleeing New Hampshire, folks. Listen to this.

BIDEN: We’re gonna fight for every vote we have here, and then I’m getting on a plane and heading down there, doing a little rally in South Carolina to get going, and then get in a plane and going in…

BIDEN: …Nevada. (reporters all talking over one another)

UNIDENTIFIED REPORTER: (crosstalk) Are you concerned about the message that you’re sending to New Hampshire by going…

BIDEN: Not at all. Not at all. They know we’ve worked our heart here. We’re continuing (cheers start) we’re going to go all the way to the end.

RUSH: We’re not even waiting for the results. We already know we’re gonna get shellacked. We’re heading down to South Carolina. We’re gonna save the black vote. No. No. Ain’t gonna happen there or in Nevada.

RUSH: Grab sound bite number 6. We’ve got time to squeeze this in. This is Andrea Mitchell, NBC News, Washington, on the Today Show today, and it’s just more evidence that it’s not looking good for Joe Biden.

MITCHELL: Not at all! And they could place fifth, certainly fourth. And the fact is, they’re beginning to have that feeling of a loser. Mike Bloomberg has moved into position, and having lost so much of the African-American support, Joe Biden is almost on fumes, really. This is a real problem for their campaign.

RUSH: I hear this stuff and I wonder, “Where have these people been?” They believe their own conventional wisdom, inside baseball stuff. Biden hasn’t… It was never going to happen. Beginning to lose African-American support? Guess I’m gonna have to explain that too.

RUSH: Now, I mentioned in the previous hour that one of the mistakes that Plugs made was mentioning me. The Democrats believe that they can fundraise off my name. They believe that they can get cheers and accolades by mentioning my name and that it’s gonna redound to their benefit. I want to demonstrate here via audio sound bite that that’s not how this happens. We’re at audio sound bite number 7.

Now, this is Friday night in Manchester. This is live on ABC. It’s during the Democrat presidential debate, and Biden is talking about Trump (I can’t wait to talk about this) frog marching Vindman out of the White House. “O say can you see you later, by the dawn’s…?” This guy… We all know an Alexander Vindman. We’ve all had at least two of these guys in every class in high school. We’ve all had a guy like this somewhere where we work.

This guy turns tail on Trump, participates in an impeachment hearing in an attempt to get Trump thrown out of office, and now people think it’s outrageous that Trump would fire the guy? “This is unheard of! This kind of retaliation is unheard of.” What do you mean, retaliation? What about what Vindman did? “He’s a decorated military man, Mr. Limbaugh. How dare you assault his motive.” What do you mean, decorated?

I can assault his motives all I want! It doesn’t matter what his medals are! It matters what he did, and he made up a bunch of stuff, sitting there saying Trump didn’t follow his talking points. He doesn’t set foreign policy! Trump never even met this guy. Trump doesn’t know this guy produces talking points. But Vindman’s taking it personally. “He did not follow the talking points that I wrote! I produced the talking points for that phone call.

“I do U.S. national security for Ukraine.” In your dreams, dude, do you do national security for Ukraine. You might have in the Obama years with your buddy Eric Ciaramella, the whistleblower. But Vindman’s gonna be okay. He’s back at the Army somewhere, some Army War College. I just marvel at all these people. (sniffling) “It’s so unfair what happened to Vindman. This retaliation has gotta stop!” Yeah, like you can sit there, and anybody can shoot at you and take potshots at you.

And you just have to sit there and take it, and then you’ve gotta thank ’em after you survive it then you gotta walk up and shake their hand and say, “Nice try.” Nope. It isn’t how it works anywhere. You take a shot at the leader, the king? If you miss, you’re history — and everybody in this game knows that. Anyway, anyway, Biden’s being asked about Vindman and being fired, walked out of the White House, and this is what Plugs had to say.

BIDEN: Colonel (sic) Vindman got thrown out of the White House today, walked out. I think we should, and — and at the same time, he should have been (sputtering) pinning a medal on Vindman and not on Rush Limboll.

BIDEN: (coughing) And I think…I think we should be doing now… I think we should all stand and give Colonel Vindman a — a — ashow of how much we supported him. Stand up and clap for Vindman.

BIDEN: Get your… Get up there! 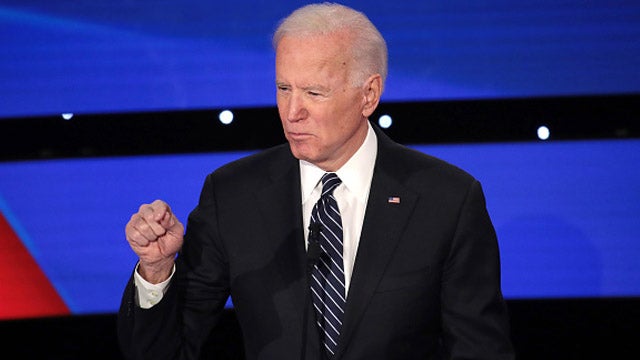 RUSH: Right, stand up for Vindman. Stand up! Right, stand up for Vindman. (interruption) No, no, no, I’m not playing this ’cause it’s about me. I’m telling you, Plugs thought that he was gonna score big my mentioning me, by pitting Vindman against me and so forth. Here’s how it fared. We’ll get back to sound bite 8, sound bite number 9. This is David Axelrod and Joe Lockhart, and they are talking about how phony and practiced and ill-delivered Biden’s line was.

AXELROD: This had all the earmarks of something that was planned, that he wanted to do. Um, and that — and it was effective. But it also, you know, he — he just getting… Getting the whole thing, laying it out is not his. He’s.. He’s not smooth in doing it, and so, um, it could have been a — amore effective moment than it was.

LOCKHART: David has hit on, uh, a point which is when you try to script Joe Biden, it doesn’t work, and he kind of stepped on his own line.

RUSH: Well, in the first place he mispronounced my name, “Rush Limboll.” But the whole thing was ill-conceived and the amount of… I was actually surprised at how little applause Biden got for it. Anyway, there’s a staccato or an exclamation point to this.

RUSH: The Drudge Report has a link to, “Record Turnout in New Hampshire?” I didn’t click on it. Look. I gotta run fast here. Sound bite 10 and 11. Now, the point here is Biden invokes my name — he liked it so much, he did it again — and after doing it, he has fled New Hampshire, conceding defeat, and this has happened before. This what I want to illustrate. So here is Biden yesterday in Manchester.

BIDEN: (shouting) Are you ready to get rid of president who pins a Presidential Medal of Freedom on Rush Limboll?

BIDEN: Are ready get rid of a president who has marched a decorated war hero out of the White House for telling the truth and who was a real hero and has real courage and escorted him out?

RUSH: Right. So there he is: Me versus Vindman again. Of course, Vindman, more on him later. Now, when has this happened in the past? It happened in… Let’s see. This was 2004, and this happened… It’s either Iowa or New Hampshire. This is actually a montage all of the times Howard Dean tried to revive his faltering campaign using me. 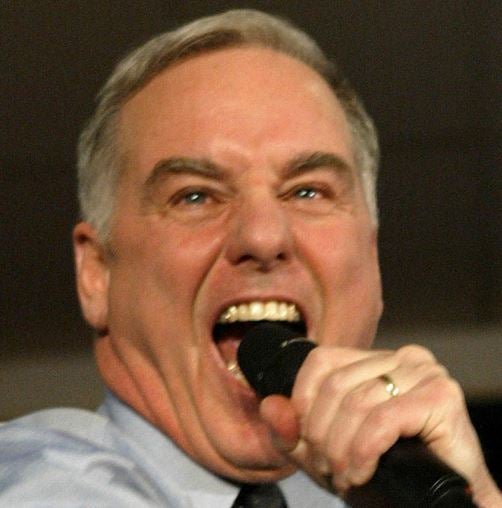 RUSH: This guy flamed out. Howard Dean flamed out. It was one primary he was supposed to win. I think it was either Iowa… He was supposed to win the Hawkeye Cauci real big and came in 23rd, and it was over. I don’t even remember why he got on this roll thinking that the flag was mine or why anybody else in the Democrat Party thought the flag was mine. This is so funny to go back and listen to that. But this is what happens. They think they’re going to skyrocket mentioning my name, and it doesn’t end up helping them.

RUSH: Yeah, was January 19th 2004. And Howard Dean — that was the date of the Hawkeye Cauci. Howard Dean, according to all the prepub polling data was just gonna smoke everybody in the Hawkeye Cauci. And he finished near last place. And that’s when John Kerry came out of nowhere — John Kerry, who served in Vietnam, by the way — and ended up on the track to win the Democrat nomination. Literally came out of nowhere, Dean finished way down. That’s when he was going nuts. And I was not his problem then just like I’m not Plugs’ problem now. Plugs’ problem now is falling poll numbers, not me.

Anyway, to the phones we go, to Wright, Wyoming. Ryan, great to have you with us, sir. Hello.

CALLER: Hey, Rush. Prayers and gratitude to you for everything you do. I’m glad you’re talking about the Democrats because I was watching the town hall with Joe Biden a week ago, and a gal stepped up to the mic and asked him what he was looking for in a running mate, and he immediately asked her if she was available. And then on top of that he went on to describe that he would look for someone younger who was immediately available and ready to step in to be president because he was too old and everybody knew it.

RUSH: And how did you interpret that, Ryan, when you —

CALLER: Well, I interpreted that he was basically just telling everybody he didn’t really want to do the job. He just wanted to be the president for a little while and then someone younger and better for the party can take over.

RUSH: Well, since we got Biden’s stories — and I remember that. Somebody young. The way to entrap Biden is to ask him a question to which the answer might involve a young woman. And if you can do that, you can trip Plugs up. That question did.

But try this. If you think that was bad, grab sound bite number 12 here. This happened Sunday. You probably heard about this by now. This is in Hampton, New Hampshire. Let’s see. This was a town hall. This was not at a diner. By the way, Steve Doocy, Fox News, “Hey, we’re the first ones that did diner stuff.” Doocy said this morning that Fox & Friends were the first anywhere to go to diners. Well, no, I’m not ripping Fox News by doing this. I wasn’t ripping anybody. I’m just making an observation. So, anyway, here’s Biden, unidentified woman asking him about his pathetic performance in the Hawkeye Cauci.

UNIDENTIFIED WOMAN: How do you explain the performance in Iowa and why should the voters believe that you can win the national election?

BIDEN: It’s a good question. Number one, Iowa is a Democratic caucus. You ever been to a caucus?

BIDEN: No, you haven’t. You’re a lying dog-faced pony soldier.