Where’s the Outrage? Clyburn Says Pete’s Sexuality Is a Problem

RUSH: Now, here is James Clyburn, the former chairman of the Congressional Black Caucasians. This was Sunday morning. So that would be yesterday. CNN State of the Union. Dana Bash, who was part of the media montage bashing me with knee-jerk insolence, puerile reactions, said to Clyburn, “You said to me on this program in November that Mayor Buttigieg will have trouble with older African-American –” This, folks, this is why, South Carolina is why the Democrats don’t want people to know Mayor Pete’s gay. Not yet. 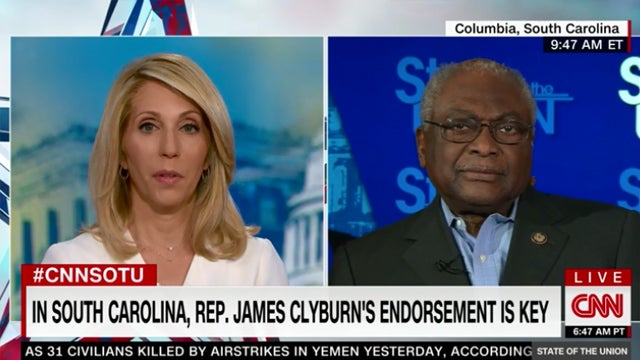 South Carolina is why. Heavy African-American vote there. Biden’s counting on it. A lot of Democrats are. This is why they’re not shouting to the rooftops about Mayor Pete. And this is what Clyburn is gonna confirm here for us. So Dana Bash says, “You said to me on this program in November that Mayor Buttigieg will have trouble with older African-American voters in South Carolina because he’s gay. He’s done really well in Iowa. He’s done really well in New Hampshire. As voters learn more about him, do you think they will still feel that way?”

CLYBURN: I grew up in a fundamentalist, Christian church. My father was a pastor there. My grandfather was a pastor. I know what takes place in fundamental Christian churches throughout the country. And so though I may feel differently, I don’t adhere to everything that was taught in the church I grew up in. I still feel that that is a problem and we all have been reading what has been said in the last 24 hours about that.

RUSH: Now, why is nobody outraged by that? Why didn’t Dana Bash jump down this guy’s throat when he told her that basically Mayor Pete’s sexuality is a problem among Democrat voters in South Carolina? Why aren’t all the Drive-Bys asking about this? Why aren’t all the Drive-Bys out taking James Clyburn to the woodshed? Well, we know the reason. We know why. I’m asking the question rhetorically.

But Clyburn’s comments here prove that what I said was right on the money, 100% right. The Democrat establishment is worried about this, and here I come along basically talking about how Mayor Pete’s gay and he hugs and kisses his husband on the stage. Can’t have that. Not going into South Carolina. So now he says, “I’m not going to be lectured to on family values by Rush.” I didn’t even engage in lecturing Mayor Pete on anything. Never have.