How the Left Brought Down the Boy Scouts

RUSH: The Boy Scouts are going out of business, and it’s because they’ve been – ah, yes. Here we go. “Boy Scouts of America Files for Bankruptcy After Sex Abuse Lawsuits.” I think what jogged my memory on this, here’s Bloomberg, who has been as unsympathetic to pregnant women as you can find, as unsympathetic. He’s literally told pregnant women who’ve worked for him to kill it if they want to keep the job and not go on some kind of leave and maybe not get the job back. And there has been other forms or types abuse of women for which he settled and then made them sign NDAs.

So it’s blatant hypocrisy once again and it reminded me I had this story. “Boy Scouts of America Files for Bankruptcy After Sex Abuse Lawsuits.” Now, let’s walk back in time a little. It wasn’t that long ago that the Boy Scouts did not permit open homosexuality within the organization. And, of course, this made them a target. Now, during all those years, the Boy Scouts of America was never hit with sex abuse lawsuits. There were not rampant reports of Boy Scout masters abusing the members, Cub Scouts, Boy Scouts, you just didn’t hear about it. 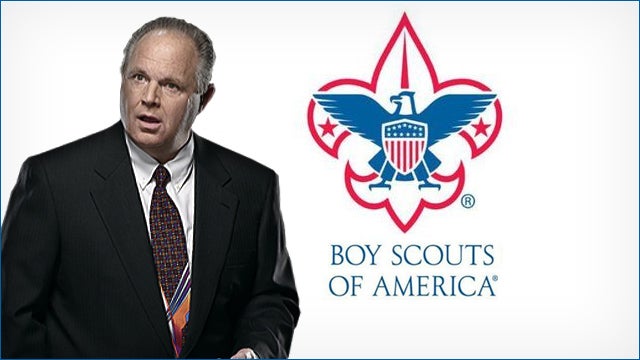 And then one day — and it’s 20 years ago or so, maybe, 15 years ago — the Boy Scouts of America began to be accused of being bigoted, unfair, intolerant because they wouldn’t allow homosexuality and homosexual members, homosexual scoutmasters and so forth. And they relented. They buckled to the pressure. Now, the Boy Scouts of America has always been an organization, you could take it back to its founding, it was, among many other things, it was an organization that taught survival skills. It basically taught young people, boys, how to be men. Merit badges, all that.

Because people feared that it was really just a clandestine effort to compromise the whole organization much like the Catholic Church. So what does the story say here? “The Boy Scouts of America (BSA) filed for Chapter 11 bankruptcy protection early Tuesday after decades of sexual abuse claims within one of the country’s largest youth organizations. The petition, filed in Delaware bankruptcy court, halts the hundreds of lawsuits the BSA is facing that allege sexual misconduct by people within the 110-year-old organization over the years.”

Yeah, when did all of this abuse start, I ask rhetorically? “Sexual abuse settlements had reportedly strained the Boy Scouts’ finances, with states passing laws last year so victims from long-ago abuse can sue for damages. Mike Pfau, an attorney whose firm was representing 300 victims in New York as of last April, said the bankruptcy would be ‘bigger in scale than any other sex abuse bankruptcy.’

It sure seems like there’s a blueprint here, and it sure seems like it works. They shame normal people into accepting things that they instinctively don’t want to accept, and then once that happens — well, there are other institutions you can examine to see what happens. They get sued out the wazoo, and the bottom line is that this organization’s gonna go kaput. Which was the original intent of all this in the first place.

RUSH: Aaron in Peoria. It’s great to have you. Welcome on the EIB Network. Hello.

“No, we’re not unfair. No, we are not being mean. No, we are not exclusionary. We have a certain set of values. We have enforced them since the beginning of time in the organization. We’re not gonna change ’em.” That’s what you have to do when you’re attacked as an organization. If you don’t — if you buckle and say, “Okay. We don’t want the hassle, we don’t want the negative publicity, come on in” — you can count your days.

Because the objective is to corrupt your organization. That’s what the left does. The left is going to corrupt anything that stands for what have been considered to be traditional American values. That’s their purpose — and they do it, and they go after religion, they go after God, they go after any number of things they consider ideological opponents.