RUSH: Look at Jeff Bezos. What did Bezos do? Bezos just bought a $165 million property in Beverly Hills, the old Jack Warner estate. I’m told it’s actually more than that, that Bezos asked for the number not to be honestly reported. There were no real estate agents in this sale. It was strictly Bezos and David Geffen. I understand it’s more than that, but Bezos was worried about negative publicity.

Sorry (chuckles), once you got to $165 mill, okay, what’s it, $185 million, $200 million? Whatever. Drop in the bucket. So you know what Bezos did next? Since we know he was concerned about negative publicity buying a house that costs that much money, here came a news report that Bezos’ house cost more than the amount of taxes Amazon will pay. Okay. So Bezos realizes he’s got a problem. That’s a PR problem. He needs people to continue to patronize Amazon and buy stuff there. He needs people using Amazon Web Services. 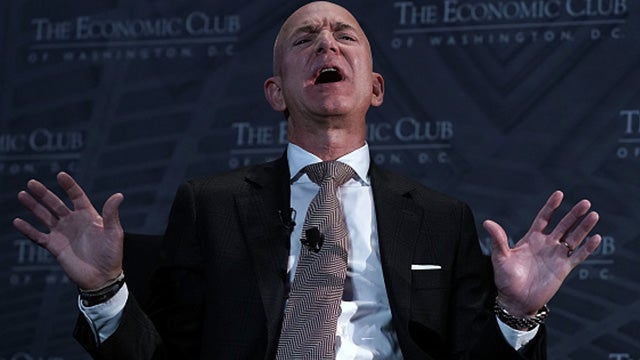 So what does he do?

He announces a $10 billion donation to fight climate change.

What does that do?

You’d have no idea, do you?

RUSH: Now, back to Bezos and my question. If you had any amount of money — let’s use Bezos because he’s announced $10 billion to fight climate change. And, of course, people that don’t even stop to think, “Yay, all right!” You ought to see the tech bloggers. The tech bloggers are having orgasms over it. Tech bloggers hate Jeff Bezos. They hate Amazon. They hate any successful business. Top of the list they hate is Apple. But then Amazon and Facebook, they hate them all.

But, man, Bezos is all of a sudden a hero, $10 billion to climate change. Now, do you know Bezos actually believes that earth is a place that needs to be abandoned if the human race is to survive? He thinks earth is a place to be visited but not to be lived on or in. I’m not making this up. He’s part of this group of rich guys who really believe this climate change malarkey is destroying the habitat and destroying the ability for life to be sustained on earth. It’s absurd.

So $10 billion. You know, it doesn’t matter where the money goes. All that matters is the statement, the PR release, “$10 billion fight climate change,” he’s a hero, and he’s just bought off all critics for anything else that he does. Now, what’s he gonna spend the $10 billion on? I guarantee you what it’s gonna be. He’s gonna buy every scientist he can. He is gonna invest in every research project that there is on earth, $10 billion will buy you a lot of propaganda.

If he wanted to, he could purchase a pro-climate change curriculum and put it in every school in America because every school in America’s walking around with its hands out. I mean, from kindergarten up through high school and into college. He could fund, he could create a pro-climate change curriculum where the United States is the big problem, and have it taught to every student in the country.

Or he could donate it to every scientist, every university, anyplace doing any so-called research on this and own them. And it’s his money. Don’t misunderstand. He can do with it whatever he wants. But this is the reality of this supercharged wealth. I saw a story the other day, also in the United States, CO2 emissions are at a 20-year low. In other words, the amount of so-called climate change greenhouse gases being produced ostensibly destroying the planet, the United States emissions are way, way down just in the three years of the Trump administration.

There’s also a story in the Stack of Stuff that these hybrid cars, the cars that are half electric, half internal combustion, they create more CO2s and more pollution than any kind of car out there. But nobody knows it because it isn’t being widely reported.