RUSH: There’s some fascinating polling data out there, and it’s interesting. It goes well with the scope of yesterday’s debate. Let me look at calls that we have. You know there’s not a whole lot of reaction to that debate last night? You’re not getting much, are you? I think I may be one of the only people in this audience… Well, I’m not part of audience. I’m the host. 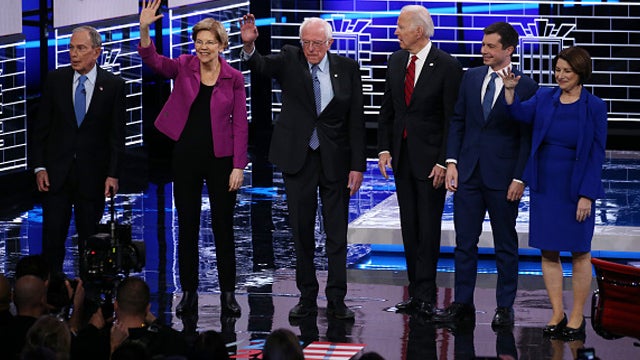 But how many of you watched MSNBC last night, the debate and then the aftermath? I even watched the aftermath. I watched the PMSNBC post-debate analysis. Folks, it was like watching the Star Wars bar scene in English. It was better than the debate, listening to how seriously all these analysts were examining everything that had been said, and there was a clear consensus that developed, and that is that Bloomberg blew it, and they were hoping for such great things.

Most everybody was interested because it was so “rough-and-tumble,” they said. The gloves came off. “The kicks to the crotch were happening all night,” somebody said. I don’t know about that. But at any rate, we don’t have a whole lot of people reacting to it, but I had to. In the event some of you people wanted to know what happened, I have to be the one with the answer for you, and so I endeavored to watch all that, and I haven’t had MSNBC on… It has been years. But juxtapose all that with this.

A Washington Examiner story by Paul Bedard: “Trump Takes 2020 Lead, 52%-48%, All Democrats ‘Probably Lose.'” This is an Economist/YouGov poll. By the way, Sharyl Attkisson is out with a piece — you know, the former CBS News reporter. She’s got a piece essentially saying not a one of these people can beat Trump. That, as things stand now, there’s not a soul in the Democrat Party could beat Trump, and it’s not even gonna be close. But this is a story by Paul Bedard.

“A politically resilient President Trump has pushed into the lead of the 2020 White House race, riding the public’s good feelings about the economy and the view by voters that all leading Democratic candidates will ‘probably lose,’ according to the latest election survey. By a 52% to 48% margin, Trump is leading the generic ‘Democrat’ in the race…” Now, you have to be careful about these generic ballot polls, because everything changes when you put a name in there.

This is one of the tricks the Drive-Bys always use in election years to show Democrats creaming Republicans. They do the no-name polls. They’ll pick a name on the Democrat side and then offer just “Republican” alternative, and the Democrat cleanups. When you add a Republican name, it changes it significantly — and this probably would be the case here too. But I think if you add a name to this Democrat poll, the Democrats do even worse, which is why I think The Economist and YouGov did this poll with generic Democrat rather than a name.

‘Cause this poll shows 52-48. I think it would be even worse if it was, say, Trump versus Crazy Bernie, Trump versus Klobuchar, Trump versus Mayor Pete, Trump versus Bloomberg. “By a 52% to 48% margin, Trump is leading the generic ‘Democrat’ in the race, a significant margin for a president who just beat back impeachment to stay in office.” See, there’s another example where conventional wisdom is dead wrong. They think Trump ought to just be barely squeaking by because he was just acquitted in an impeachment trial. 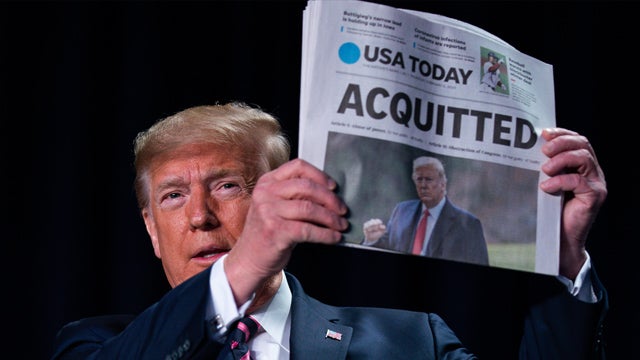 What they don’t get is that most people think all of that was bogus and uncalled for and purely political and frustration on the part of the Democrats because they haven’t been able to defeat Trump any other way. That impeachment victory of Trump’s was such a slam dunk, there’s no wonder it’s redounding to him positively. “The latest Economist/YouGov survey also found that most voters believe that Trump will probably beat all of his Democratic challengers by at least 19 percentage points” –19 percentage points!

“While White House officials are buoyed by the results and other polls showing a post-impeachment surge, some told” Paul Bedard, the Washington Examiner, Secrets “that they believe the race is extremely tight and unclear due to the emergence of” Bloomberg. Dream on. Bloomberg is not clouding the race. He’s clearing the picture.