Brennan and Clapper Crawl Out of the Deep State Woodwork

RUSH: But what would this whole thing be without the lead corrupting agent in this whole thing, Obama’s former CIA director, John Brennan? He was the ringleader. Brennan was the link between the Brits and their efforts to implant spies in the Trump campaign. He was the link, because he was no longer in office. You know, Obama left, and he was not CIA director, but he still knew all the people.

So the Brits and whatever they learned funneled everything through Brennan, who then funneled it to the FBI. That closed the loop, and that’s how they kept things coordinated. Brennan was on MSNBC today, right on schedule, to help promote this silly “Russians want Trump” business. The question he got is, “What is your message to your former colleagues in the intelligence community who are still fighting the fight inside the intelligence services?”

BRENNAN: Carry out those responsibilities that you swore an oath to do, because they have that very solemn responsibility. Whether you’re intelligence or a diplomat or in law enforcement, you better carry out your responsibilities. I would tell ’em not to go to the door, not to leave, continue to do their work the best they can. This country needs FBI agents and CIA officers and diplomats around the world, and Donald Trump is in a very painful phase that we’re going through right now. But we will get through this. So I — I — I encourage people who are currently in the government to stay there, do the best they can, and push back. 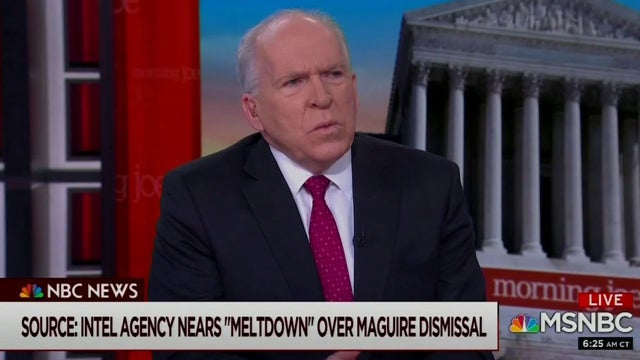 RUSH: It’s a pep talk. It’s a pep talk to the deep state because they are at their wits’ end. Truth be told, they have got to be feeling powerless. All these ambassadors, Lieutenant Colonel Vindman — O say can you see? — show up and testify. They essentially get fired, reassigned. They’re out of the mainstream now. They gotta be beside themselves! So here’s Brennan givin’ ’em an old pep talk: “Hang in there, buds! Keep working. We’ll find a way to prevail.”

We got one more. James Clapper, partner in crime with Comey and Brennan and Obama in an original attempt to set Trump up in a Trump Tower/Trump office meeting on January 6, 2017, before Trump was inaugurated. (If you want, I’ll tell you the story. It’s old hat by now.) He was on CNN with Don Lemon last night. Question: “Now we know the president was angry with Acting Director of National Intelligence Joseph Maguire over this briefing about Russia [wanting him to win] in the 2020 election. President Trump didn’t want to hear that.”

So what’s going on, Clapper?

CLAPPER: It shouldn’t have come as a shock to anybody that the Russians are going to continue to do what they did in 2016, given the success —

There are so many assumptions. “The Russians meddled in the election.” Yeah, how? Everything they’ve said that the Russians did in meddling with the election to get Trump elected there’s not a shred of evidence for and nobody’s found any, so what the hell is Clapper talking about here? Well, all Clapper is doing is the same thing everybody else is doing, trying to keep Democrats armed and antsy. 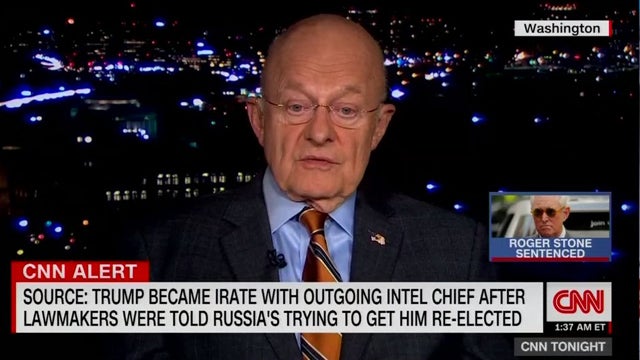