Trump Rally Data Scares the Heck Out of Democrats

No, because some people think that this actually is an attempt to reach Trump voters — a relentless, unstoppable attempt to reach Trump voters, and distance Trump from his voters and make them abandon him. But I don’t think that’s what this is. I think they have concluded they can’t do that. The Democrats are the only people who believe this crap in the first place. It’s the most astounding thing. I’m sure you know Democrats that to this day…

Despite no collusion, despite the fakery of the Steele dossier, I’m sure you know Democrats who believe every syllable of this (chuckles), even though it’s impossible. So the leftist establishment sees… I’ll tell you what’s happening out there. You know, Brad Parscale, who is the campaign manager for the Trumpster, goes at every rally and they count everybody there. They count people in line. They count people who apply for tickets. They count people who get in. In fact, you know, I need to call… Let me give you the latest data, because as a powerful, influential member of the media, I get this data. So I want to print this out. 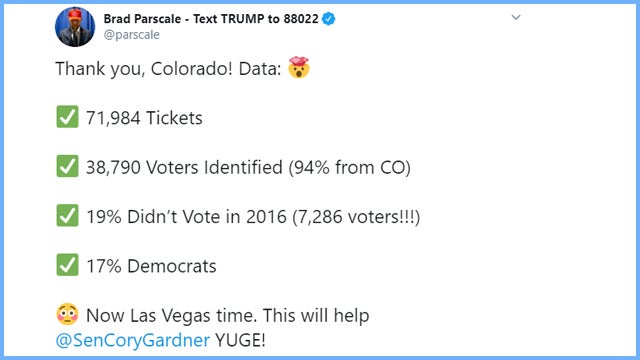 I have the Colorado rally data that was sent to me by Parscale. He sent it to a bunch of people too. But listen to this. I have it right here in my formerly nicotine-stained fingers, right off the printer, which actually worked quickly today. Here is the Colorado data collected by the Trump reelection campaign. Of the 71,984 tickets… Let’s call it 72,000. Of the 72,000 tickets, about 39,000 of these people were voters, 94% of them from Colorado. Now, the big news there is you’ve got 72,000 tickets; only 39,000 were voters and the others are not voters but could be?

They are scared to death of an actual movement of Democrat voters toward Trump. They are scared to death of African-American Democrat voters moving to Trump. They have to stop that momentum, and that’s what this Russia business is. They’re throwing this crap out hoping it sticks on Democrat walls, because they are the only people that believe it. Trump voters don’t believe it. You can’t make ’em believe it. Independents don’t believe it. You know who believes this stuff? Educated… College-educated suburban Democrats believe this crap. 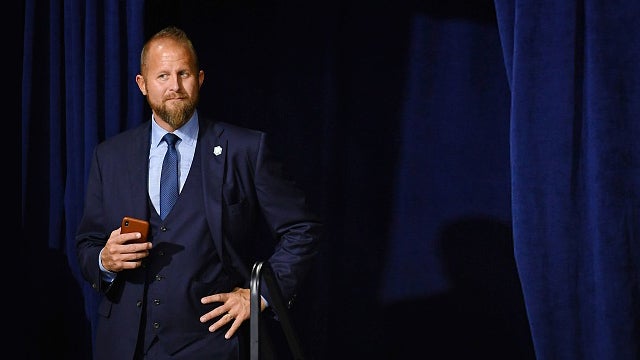 College-educated suburban Democrats believe this Russia business, and that’s what the Democrats are trying to protect, because there is a significant movement of Democrat voters to Trump as evidenced by a lot of polling and survey data of what’s happening at these rallies. These numbers that I just gave you out of Colorado are pretty consistent rally to rally to rally. So this is a defensive move. The Democrats and their establishment have got to do something to stop this erosion.

I think that’s why there was some original hope for Bloomberg.