The Drive-By Media hype of this thing as a pandemic, as the Andromeda strain, as, “Oh, my God, if you get it, you’re dead.” Do you know what the — I think the survival rate is 98%. Ninety-eight percent of people get the coronavirus survive. It’s a respiratory system virus. It probably is a ChiCom laboratory experiment that is in the process of being weaponized. All superpower nations weaponize bioweapons. They experiment with them. The Russians, for example, have weaponized fentanyl. Now, fentanyl is also not what it is represented to be. 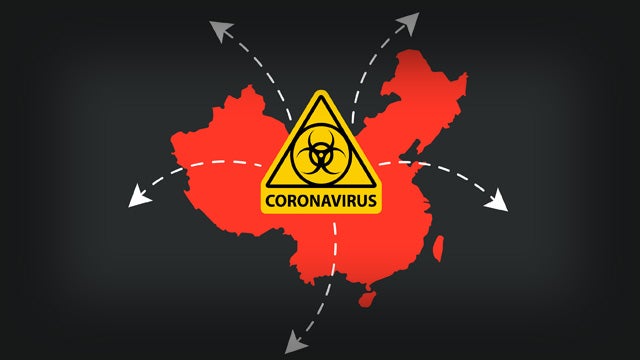 If you watch cop shows, then you probably… Stick with me on this. If you watch cop shows, you probably believe that just the dust from a package of fentanyl can kill you if you’re in the same room with it. Not true. Not true. Even the cheap kind of fentanyl coming from China that’s used to spike heroin… They use fentanyl ’cause it’s cheap. It gives a quick hit, doesn’t last very long, which is really cool if you’re trying to addict people.

But it doesn’t kill people the way it’s projected on TV. It can if you OD on it. But inhaling a little fentanyl dust is not going to cause you to lose consciousness and stop breathing as they depict on cop shows. It’s dangerous. Don’t misunderstand. But it isn’t the way it’s portrayed in popular criminal TV shows, cop shows, and so forth and so on. The coronavirus is the same. It’s really being hyped as a deadly Andromeda Strain or Ebola pandemic that, “Oh, my God, is going to wipe out the nation. It’s going to wipe out the population of the world.”

The stock market’s down like 900 points right now. The survival rate of this is 98%! You have to read very deeply to find that number, that 2% of the people get the coronavirus die. That’s less than the flu, folks. That is a far lower death statistic than any form of influenza, which is an annual thing that everybody gets shots for. There’s nothing unusual about the coronavirus. In fact, coronavirus is not something new. There are all kinds of viruses that have that name. Now, do not misunderstand. I’m not trying to get you to let your guard down. 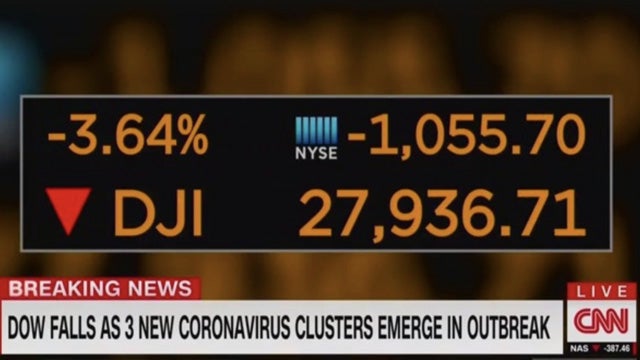 Nobody wants to get any of this stuff. I mean, you never… I hate getting the common cold. You don’t want to get the flu. It’s miserable. But we’re not talking about something here that’s gonna wipe out your town or your city if it finds its way there. This is a classic illustration of how media coverage works. Even if this media coverage isn’t stacked, even if this is just the way media normally does things, this is a hyped, panic-filled version. It’s exactly how the media deals with these things to create audience, readership, interest, clicks, what have you.

It originated in China in a little — well, not a little town. It’s a town that is 11 million people, Wuhan, China. One of the reasons they’re able to hype this is that the doctor what warned everybody about it came down with it and died. So if a doctor got it, “Oh, my God, Rush! A doctor got it? You can’t possibly be right if a doctor can’t protect himself.” He didn’t know what he was dealing with. He discovered it back in December. I’m telling you, the ChiComs are trying to weaponize this thing. Here’s the story on Russians and fentanyl.

Fentanyl is a very, very powerful opiate — and for those of you that haven’t had any experience with opiates, the people that get addicted to ’em take them and they get very euphoric. They kill pain. They do wonderful things. But they make you very, very euphoric. They act like speed. Other people take ’em, and they hate ’em. It makes ’em vomit, throw up, feel nauseous. It doesn’t do anything for ’em. They’re never gonna get addicted.

So in Moscow the Chechens, way back… I’m gonna go back now — what is it — maybe 10 years or longer. A bunch of Chechen rebels took over an opera house and had a bunch of Russian hostages in there and made all kinds of threats — and Putin, unbeknownst to anybody, had weaponized fentanyl. He’d turned it into a gas, an invisible gas. He just put it in the ventilation system of this opera house or whatever it was (I’m giving you the sketchy, short version of this) and everybody in there fell asleep and died. You know, in a drug overdose, you stop breathing.

That’s what… It slows down your respiratory system so much that you stop breathing. That’s what an OD is, and everybody in that place, including the Chechens — Pfft! — had no idea what happened to ’em. It’s not violent. You just fall asleep for unknown reasons at the amounts that Putin weaponized and put in there. If you take a normal dose of fentanyl that you get from a doctor in a hospital, it’s not gonna kill you, obviously. But the amount they weaponized — and up to this time, nobody had ever weaponized fentanyl.

Nobody had ever made it into an invisible, odorless, colorless gas, until it was discovered that the Russians had done it. Well, every nation is working on things like this, and the ChiComs obviously in their lab are doing something here with the coronavirus — and it got out. Some people believe it got out on purpose, that the ChiComs have a whole lot of problems based on an economy that cannot provide for the number of people they have. So losing a few people here or there is not so bad for the Chinese government.

There could be anything to explain this.

And if you go deeper into China, you will see that all of the high-tech Silicon Valley firms are said to be terribly exposed. “They could be suffering a disastrous year. Why, you may not be able to buy a new iPhone of any model this whole year! Do you know that? Because the coronavirus is so bad that the factories may never open — and if they do, they may not be anywhere near full capacity.” So Apple may not be able to release any new product. You think that’s not gonna panic investors? It most certainly is.

So Apple is trying to do what they can to suggest that these rumors are not true. They got new products coming this year. But the tech media hates Apple. They love anti-Apple stories. They love anything that will let them report that Apple’s on its last legs. Of course, that’s not true. Warren Buffett came out today and said, “Apple is the best run company ever.” He’s a big stockholder. So people will say he’s biased about it. But the bias you have to pay attention to is how much money he invested. He got $36 billion in Apple stock that Berkshire Hathaway has.

They sold $800 million of Apple stock last week, and everybody said, “Oh, my God, he’s getting out!” No, he’s not. He’s got $36 billion. He sold $800 million. No big deal. He wanted to allocate it somewhere else. So this is… I think the coronavirus is an effort to get Trump. It’s not gonna work. It’s one of the latest in a long line of efforts that the Drive-By Media’s making to somehow say that Trump and capitalism are destroying America and destroying the world. Just keep in mind where the coronavirus came from.

It came from a country that Bernie Sanders wants to turn the United States into a mirror image of: Communist China. That’s where it came from. It didn’t come from an American lab. It didn’t escape from an American research lab. It hasn’t been spread by Americans. It starts out in a communist country. Its tentacles spread all across the world in numbers that are not big and not huge, but they’re being reported as just the opposite. Just trying to keep it all in perspective.

RUSH: Here’s Neil in Orlando. Great to have you on the program, sir. Hello.

CALLER: Hello, Rush. Man, I’m blessed to have the chance to talk to you. I cannot believe it. So you were talking about the coronavirus a little bit a while ago, and what’s the one thing that disappeared when the coronavirus came out?

CALLER: That sure is.

RUSH: That’s probably the big one, the protests in Hong Kong.

CALLER: That’s my take from it. I don’t know. I’ve got a friend over there that sends me stuff. But there’s a lot… We don’t want to start any conspiracy theories, but this will be my only time I ever get through to you ’cause I’ve been calling since ’92. But I just want to say about your talent on loan from God: Just in the time, I was on hold listening to you, and it got me to the point where I just wanted to say that Trump got no notice about Russian meddling like Sanders did. So why not? I wonder about that. When Carter was president, my first home buying — I was a first-time home buyer — the rate was 13.33%. I’ll never forget it, and that was a first-time homeowner!

CALLER: That was a deal!

RUSH: I bought my first shack, you know, at that time in Overland Park, Kansas. I had no business buying it. But everybody said, “You gotta buy! Don’t rent. You’re throwing money away if you rent.”

CALLER: And one more —

RUSH: I didn’t even want people to take me home. I didn’t want people to see this shack that I lived in. One day, we’re playing football — the Chiefs front office, the Royals front office — after the baseball season. Thursday afternoon flag football. George Brett’s playing and he offered to take me home. I said (chuckles), “No, George, I’m fine.” I didn’t want Brett to see where the shack was. So, yeah, 13% interest rates during Carter, and it was bad. Carter actually coined the term “malaise” to describe his own administration and its effect on the American economy!

We had “the misery index” and all of that.

But look, back to the coronavirus for just a second. That is true that the Hong Kong protests strangely subsided as the news of the coronavirus expanded — and I’ll tell you, it is a way… If you are a totalitarian government and you need to control your population, one of the best ways of doing it is unleashing something they think is a deadly disease and then you, as the dictator, have the “safety solutions.” You have the ability to round people up from their homes and take ’em to so-called health camps.

Be very leery of this, folks.

It probably is not what the media’s leading you to believe it is.