RUSH: Hey, folks, there was a special election last night. The Drive-By Media is not telling you about this special election. It was in Kentucky, the 99th Congressional District in Kentucky. The Democrats have held this seat for 33 years. Registered Democrats in this district, Kentucky 99, outnumber Republicans by double digits. 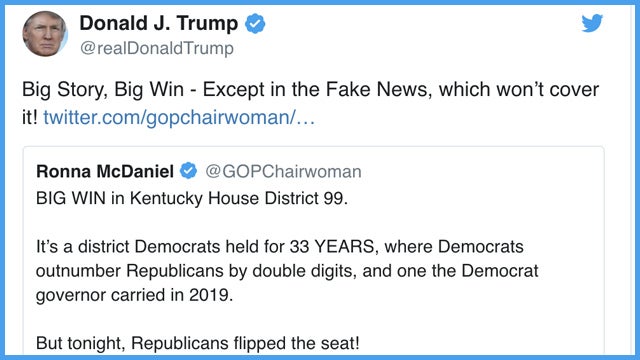 And guess what happened? Republican Richard White won the special election last night to represent parts of eastern Kentucky in the House of Representatives. The seat was left vacant by Democrat Rocky Adkins. He moved on late last year to serve as senior adviser to the governor.

Now, why wasn’t this considered a bellwether? Why wasn’t the media out looking at, “Boy, I tell you what, this is a lifelong Democrat seat, 33 years. If the Republicans win this one, it could be a bellwether. It could signal the end of the Democrat Party. It could signal a big day for Donald Trump on Election Day in November.” Not a word. A story the Drive-By Media will ignore all day. Thirty-three years the Democrats held the seat, Kentucky 99th district and the Republicans picked it up in a special election.