Get Ready for the Hysteria When More Tests Find More Infections

RUSH: I’ll tell you something else to look forward to now or to look down the road at. We’re gonna be getting more and more test kits out there ’cause Dr. Fauci, Dr. Anthony Fauci from Trump’s own CDC is out there saying, “This is a major failing that we do not have enough test kits. A major, major failing.” And so, bingo, right there on the Drudge Web page and every other major site, “It’s a failing.” “Trump CDC: We don’t have enough test kits.” And then the bottom headline: “150 million could become infected.”

No. But here’s what’s gonna happen. As these test kits get out there, more people are gonna get tested. What do you think that’s gonna show? More people infected. It’s gonna feed on itself. It’s not gonna tell you how many people infected don’t suffer from it, and that’s a large number of people. The number of people who actually test positive for this and never show any symptoms, it’s a pretty big number. It was true in China. It’s true in any number of places. But they’re not gonna report that. 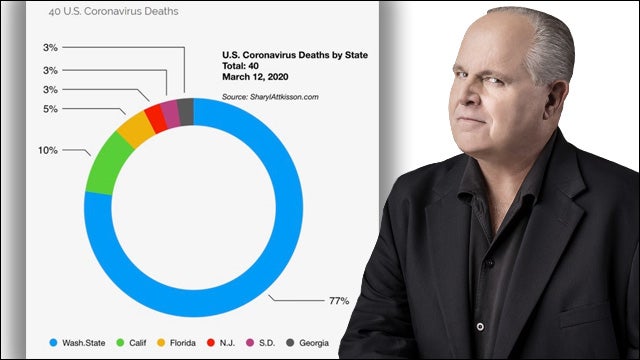 So as these test kits get out there, you are going to be hammered with how many more people have the disease. Do we have time to squeeze a call in there? Probably not, but I’m in such a foul mood today that maybe it’s — Let’s try Brian in Richmond, Virginia, let’s see if you can squeeze this — you got one minute. I’ll give you one minute. If you can’t do it in one minute, tell me, we’ll come back to you.

CALLER: Hello, Rush. Thank you for taking my call. I just wanted to let you know. I think Trump should address the nation and say, “American people, we’ve got this, we’ve got this under control. Continue to wash your hands, take precautions, and don’t believe the fake news and the media hype. It’s not that serious. We’ve got this under control. And things need to go back to normal in this country. We need to resume baseball, basketball championships, things like that, and stop buying into the hysteria and the panic.”

RUSH: Man, I wish there were a way he could do that. I wish there were a way. But that would be walking back from where he is. But, you know, you reminded me of something. You ever stop to think, what’s gonna happen to the cable TV industry now with no sports being televised? They’re already losing customers, cord cutters. Now with nothing to watch, what do you think’s gonna happen to them?

RUSH: The media and the Democrats have been lying to us for four years about Trump, Russia, Ukraine. Do you think they just started telling you the truth this week? I’m just asking.