Pelosi Sets Up for Impeachment on Coronavirus

RUSH: This frosts me. CNN, Nancy Pelosi is on her broom now on CNN lying through her teeth, claiming that Trump and McConnell admit they didn’t take action early enough to stop this. It’s an absolute lie. It was Pelosi that was in Chinatown in San Francisco urging people to come on down and party in January. Trump suspended flights from China in January. Trump did take it seriously.

This is all about impeachment. They’re trying to say that Trump has admitted that the impeachment thing distracted him and so forth. They’re making it all up.

RUSH: It looks like — and I’m not kidding — it looks like Nancy Pelosi’s setting the stage for impeaching Trump again over his reaction to coronavirus. It just means they know they can’t beat him with anybody in an election in November. And we have some sound bites. He’s on CNN today. You’ll be able to hear it for yourself. Seventy-eight percent of black voters — Rasmussen poll — 78% black voters fear government’s coronavirus cure will be worse than the problem.

RUSH: Pelosi on CNN today with Anderson Cooper. Here’s the question. “The president and Mitch McConnell now are now suggesting that impeachment distracted the president from responding to the virus. Do you buy that at all?” 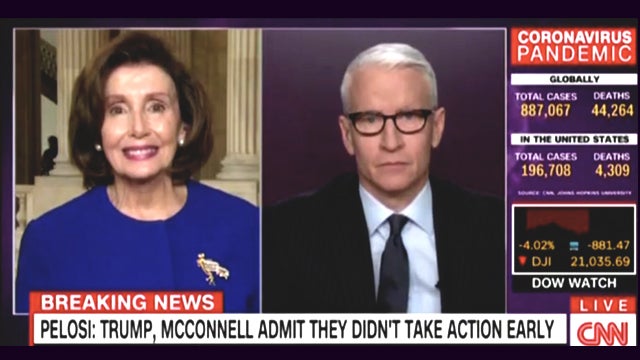 PELOSI: I think that’s an admission that perhaps the president and the majority leader cannot handle the job. We have a life and death situation in our country, and they should not try to hide behind an excuse for why they did not take action, but it does admit that they did not take action. But that’s from after action review down the road. Right now we have to work together to get the job done.

Now, there was an allusion to the fact that while all of that was going on, people’s attention was distracted, but it wasn’t Trump’s. Trump banned flights from China. We’re going blue in the face pointing out these truths. But Pelosi is lying look at her teeth here, flying into CNN on her broom trying to make it look like Trump and McConnell are admitting they can’t do the job because this little impeachment thing distracted them from Americans losing their lives.

RUSH: Then she said that all of this is just the tip of the iceberg.

PELOSI: Put forth our recovery piece of this that related to how we have to invest in this next bill in the infrastructure of America. When we’re talking about meeting health needs, community health centers. When we’re talking about water, clean water and the rest, investing heavily in clean water in the legislation. And where we’re talking about broadband, we talk about all that that means in tele-education, telemarketing, telemedicine. The list goes on about how dependent people are now on the Internet, and we have a big investment in broadband to address underserved areas, rural or inner city, wherever it is.

RUSH: She doesn’t know even know what she’s talking about. She’s talking here about stuffing a bunch of stuff into Trump’s infrastructure bill, as though somebody’s opposed to clean water. We need the Democrats in there investing in clean water because I guess some people are opposed to it. Which is what they wanted you to believe. Broadband, internet. Everybody knows we need the internet up and running. The electricity grid cannot go down during all of this. I just want to remind everybody, this is February 24th in San Francisco. This is Nancy Pelosi in Chinatown in San Francisco.

PELOSI: You should come to Chinatown. Precautions have been taken by our city. We know that there’s concern about tourism throughout the world, but we think it’s very safe to be in Chinatown and hope that others will come.

RUSH: Come on down, the coronavirus, not a problem, it’s safe in Chinatown, February 24th. She’s out there claiming Trump got up to speed late. Trump had already shut down flights from China by the time she is urging people to come to Chinatown February 24th.