Shocking List of What’s Killed the Most People in 2020

RUSH: We go to Jacob in Climax, Michigan. Great to have you, sir. Hello.

CALLER: Rush, I’m 32. I’ve been listening since I was 6. My first memory of you was in 1993 coming home from school when you were speaking about Bill Clinton allowing the “Don’t Ask, Don’t Tell” policy.

RUSH: You’ve been listening since you were 6? That is amazing.

CALLER: Even kind of something with my father, who passed away — and he passed away in 2009. It’s something we did together. And I’ve been a longtime Rush listener, first-time caller. And this is just an amazing moment for me.

RUSH: Well, thank you, sir, it’s really, really great to have you here.

CALLER: In high school I used to be made fun of because at lunch I’d go out to my car and listen to you instead of sitting with everybody else. So — (laughing) But I found the situation with the kids on the beach pretty mind-boggling with the media, left or right, where they were chastising these kids on the beach down in Florida. I don’t remember if you remember that ’cause you were down so hard.

RUSH: Well, no, no, no. I’ve seen it since. There was a — look. The town website where I live is chiding people for being on the beach, for standing too close together while their dogs are pooping. I mean, you wouldn’t believe it. I’ve seen it all.

RUSH: Well, you know, that’s right. In a sense you have a point. Some of the Boomers have become old men yelling at kids to get off their yards. But you’re talking about the spring breakers, yeah, and I know the boomers that were doing everything they were doing in the sixties with the free love and the love-ins in San Francisco and all this stuff and the drugs now getting all upset about things, but they think they’re entitled.

But the boomer generation, I’m a Boomer, and much of the Boomer generation embarrasses me. Not the part of it I identify with, but a bunch of freeloaders. They never had life tough. So they had to invent their traumas to tell themselves that life was tough. And they made life tough for themselves by inventing all these different traumas. But, you know, you mention something. I’ve got some stats here that I want to share with you. You triggered something here, and you’ll hear it as I go through this. Thank you, Jacob, for the call.

I have here from a source called worldometers.info or if you’re in Rio Linda, world-o-meters.info. Worldwide deaths, January 1st through March 25th of this year. Are you ready? Worldwide deaths from January 1st to March 25th, 2020, 21,000 deaths coronavirus. And that’s the low number. The lowest number of deaths, January 1st, March 25th, coronavirus. Now keep that number, 21,000 coronavirus deaths, and counting. We have to say “and counting.” Now, 113,000 deaths by seasonal flu, 228,000 deaths by malaria. Around the world, worldwide, worldwide. Not America. Worldwide. 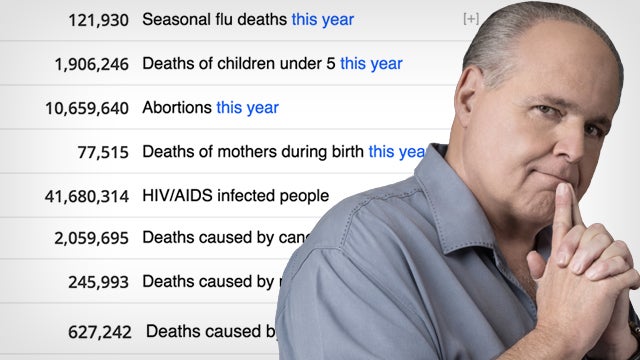 Let me start again. I know numbers are hard to follow on radio. I do it better than most because I am patient. This is January 1st through March 25th. So basically three months.

In the first three months of this year, January 1 through March 25th.

Throw the abortion numbers out. I’m not trying to be provocative here. I mean, you can’t. But throw ’em out, you still have some really shocking numbers. Because we don’t talk about it. We got suicide hotlines. We try to teach people to drive safely. We do whatever we do with HIV/AIDS. We tell people to drink responsibly, tell people not to smoke, try to devise cancer treatments, we try to feed people.

RUSH: Here’s Roland in Houston. Roland, you’re next. It’s great to have you on the EIB Network. Hi.

CALLER: Dittos. Thank God that you’re here behind the golden mic to bring us back to ground earth. Two quick points. First, on your theory or your wonder as to why California’s numbers are so low, relative to New York, I believe the difference is the mass transit. You have five plus million a day in New York versus a couple hundred thousand at best in California.

Second point, and most importantly, addressing your concern about everyone’s lack of understanding of what’s gonna be the result of all of this chaos and your uncertainty concern as well. I believe if Trump took the position that going forward we should be obligated to tell the states, tell the media, tell everyone including the CDC to report the flu effects every year when it comes to deaths. And we have zero impact on the economy despite all of these absolutely related deaths taking place. I’d appreciate your opinion. Thanks.

RUSH: Well, I was one of the early, shall we say, leaders in informing people of the Swine flu back in 2009 and 2010. Those numbers are astounding. Let me see if I can — I don’t have ’em in front of me. There were 80,000 deaths, 300,000 infections, and there’s some millions in here too. The Swine flu was devastating. It dwarfs what’s happening here. And we didn’t shut down anything. In fact, Obama was credited for brilliantly handling the crisis. And it was used, Swine flu numbers were used to tout and promote Obamacare.

“And the flu kills specific groups — you know, elderly people, people with pre-existing conditions — that makes ’em susceptible to it. But this, we have not one defense to it except staying home,” and so, they say, “You can’t compare it.” Well, okay. I’ll accept that. Then we’re not gonna have a vaccine until a year from September. Therefore, we’re not gonna have a coronavirus shot until a year from September. 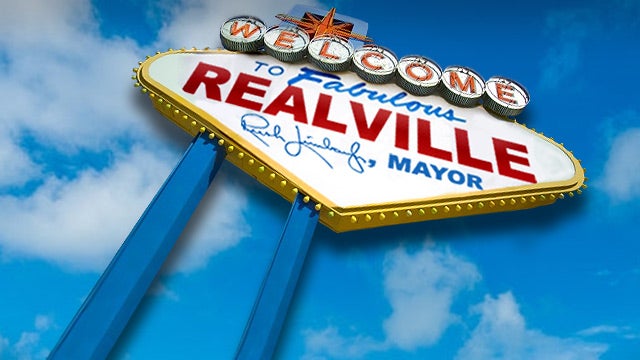 Half the people in the trial are getting the drug, half are getting a placebo. They’re studying it and so forth. It’s been shown to be effective. But this is months and months and months away, as all the other trials are. Now, we’ve got chloroquine and the Z-Pak, and I would really… It’s being used, and I would really like to know what the success rate is in various places where it’s being tried.

But we’re not being told, and I don’t know why. And I don’t want to speculate as to why. Even the president yesterday has changed his tune. He said, “This isn’t the flu. It’s worse than the flu, and we can’t compare it to the flu,” and in a way, that’s true. We accept 50,000 traffic deaths a year. We accept cancer deaths. We accept suicides. We accept ’em.

Well, we haven’t accepted. We have accommodated.

We don’t stop. We don’t shut down the country every time somebody commits suicide. We don’t stop the country when somebody gets the flu or gets hospitalized with or dies from it. And it’s because we’ve just accepted it. It’s a part of life, and there are prevention methods, and there are things you can do to help people not succumb to those things. With this, there’s nothing yet, and so that’s the big — shall we say — difference or equalizer.

We’ve got nothing to tell people to do other than hibernate.