We’re Living Under Government by Modeling 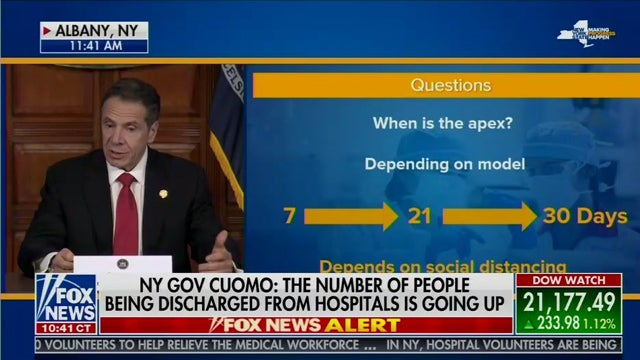 There’s only one model that we look at that has the number of projected deaths, which is the IHME model, which is funded by the Gates Foundation. That is the model that suggests approximately 93,000 deaths across the country. That’s the model that I believe Dr. Fauci was referring to when he said about 100,000 deaths. By that, New York would be about 16,000 deaths.

RUSH: So this briefing from Governor Cuomo is why I suggest we’re now living under government by modeling, and he cites the IHME model funded by the Bill & Melinda Gates Foundation that suggests approximately 93,000 deaths across the country. But, no. It’s gonna be a hundred thousand, maybe up to 140,000.

Grab audio sound bite number 7. This is a classic example to me of why the Drive-By Media ought not be anybody’s primary source for anything. This happened this morning on CNN’s New Day. Their chief business correspondent is Christine Romans, and she’s chatting with the business correspondent Julia Chatterley and one of the anchors. And there’s also John Harwood here, who’s worked at every left-wing media outlet there is, and they’re talking about the new unemployment filings.

ROMANS: It really is a job shock here. It just looks like a geyser going straight up.

HARWOOD: We have pulled the plug out from the American economy.

HARWOOD: And the result is an economic catastrophe. This is a nuclear bomb that’s been dropped on the American economy.

RUSH: Well, at least Harwood gets it. Do you hear the rest of these people at CNN? They’re not believing it. They can’t believe that having 88% of the country stay home results in this kind of unemployment. They’re stunned and shocked! Who are these people? What qualifies them to report on the economy if this is a shocking bit of news to them, that there are now 10 million people filing for unemployment compensation after three or four weeks of an ordered government shutdown?

And their only relative comparison point is the recession of 2007-2008, that (impression), “It normally takes weeks for these things, really takes months for these things to happen, Gretchen. Look…” We’re ordering people to stay home! They’re filing for unemployment, and the CNN business experts are stunned at how rapidly it’s happening?