What I Think Really Happened in California

RUSH: I have to get something off my chest here. For the past three days, I, El Rushbo, have been asking why California has not had more coronavirus cases and more coronavirus deaths. There are 40 million people. Let me give you some numbers here.

My point is this. California, they’re already bragging about having flattened the curve out there. And I have my own theory about it. I think they’ve already gone through it. I think with all the Chinese arriving, five to 7,000 a day throughout December and January, I think a lot of people had this disease, didn’t know they had it, didn’t succumb to it, didn’t even have any symptoms to it, built up antibodies to it, we don’t know. But it didn’t spread as rapidly. But when you go to California and ask them about this, they have a different explanation. 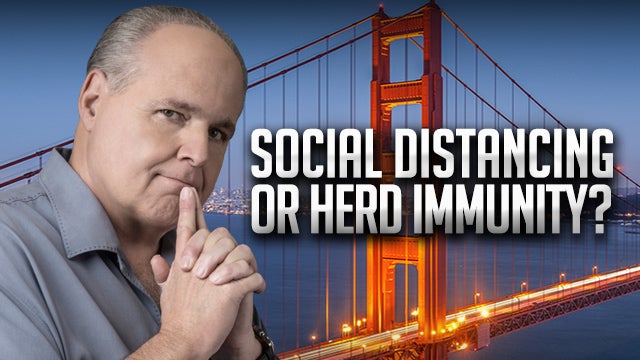 It can’t be. There have to be other reasons. Why won’t somebody be honest about what they are, what they possibly are? Well, because we’re being governed right now by social models, which tell us that social distancing is the only thing we can do. And in order to effect social distancing, we have to shut down.

RUSH: “So, Rush? So, Rush, what do you think is the answer in California?”

That’s what I think happened in California.