The Models Used to Shut Down America Were Way Off

Now, it is striking, since just a couple days ago, these officials were comparing this week to Pearl Harbor and 9/11, and some were saying death could be higher than the Civil War. Now, that is 500,000-600,000 people, and they were out there saying that. In fact, they were so concerned that Dr. Birx told people they shouldn’t even go outside to go to the grocery store or to the pharmacy.

Really? So they had to ask her to clarify that. “Well, what I meant was the whole family doesn’t need to pack in the car and go to the grocery store. Just one person and maybe once every two weeks.” Can somebody explain something else? Why is it okay to go to the grocery store and pharmacy, not to work? (interruption) Well, no, I can answer my own question.

Grocery stores, in some case, are limiting the number of people in the store at one time to 50 — and they can do what they can to maintain social distancing. And those going back to work might violate the social distancing laws, too many people too close together. But the grocery store is work. I mean, there are people going to work at the grocery, people going to work at a pharmacy.

Salena Zito has a piece warming my heart today. I have been trying to tell people: Look at the jobs keeping this country afloat led by farmers and truck drivers — and who are they? Those are industries and people routinely mocked and made fun of by elites because, you know, “They’re not sophisticated. They’re not formally educated. Farming? That’s working in the dirt. Ew! Cow manure. Ew!” 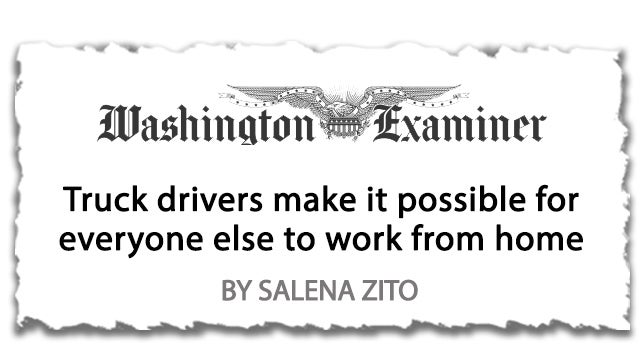 If you can’t do the job wearing coat and tie, then somehow it’s a lesser job so she’s a got a piece today celebrating and actually thanking the nation’s truckers. ‘Cause I’m telling you, without ’em, your grocery store wouldn’t be open — and without the farmers, the truckers wouldn’t have anything to put in their trailers to go driving along the highways and byways of America.

I’ve just always found that fascinating, that when you get down to brass tacks, the industries that keep this country going and fed happen to be jobs that are, in many cases, located in the proverbial flyover country. Now, let’s get back to the models here for just a second. It’s striking. A couple days ago, these officials were comparing this week to Pearl Harbor and 9/11.

Some were saying death could be higher than the Civil War.

Dr. Birx was telling people they shouldn’t even go outside to the grocery store, that this next week and a half is gonna be the zenith; it’s gonna be peak bad. There is something out there called the COVID Tracking Project. It’s a team of analysts who tabulate coronavirus data from state tallies found in the Chris Murray model, state of Washington.

It’s the IHME model, and it has been used and is being used by White House health officials. It overestimated the number of Americans hospitalized by the virus by tens of thousands. Now, I don’t expect everybody to remember everything I say on this program because the amount of content on this program is voluminous. The amount of content in the three-hour program here is far more than you’ll find in three hours anywhere else.

But one of my primary points of interest has been hospitalizations, because you would think with everything else we’re being told… We’re being told hospitals are being overrun — and in some places they are, but not everywhere. And in most cases, hospitalization… In fact, New York state hospitalizations are down three days in a row. But as I say, hang on for some caveat numbers out of New York that Governor Cuomo just delivered today reversing the trend. 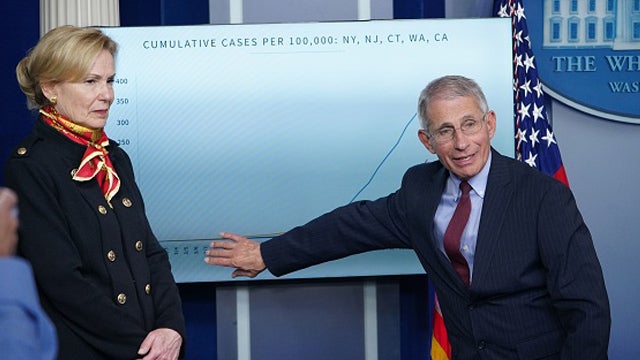 But we did; so the 2.2 number should have never have been used. Then we heard a hundred thousand to 200,000, and then 240,000, and now this model is down to 81,000. That’s still a really, really high number. Don’t misunderstand me here. We’re talking about the wide variations in the projects that were used. The same stuff is happening in man-made climate change. The exact same stuff is happening.

Now, the same model, the Murray model also lowered projections of the number of states — lowered the projections, lowered the guesses of the number of states — that will not have enough regular ICU beds from 37 to 20. For example, on Friday this model projected 3,000 deaths in Tennessee. It projected the state would not have enough hospital beds at the virus’ peak. 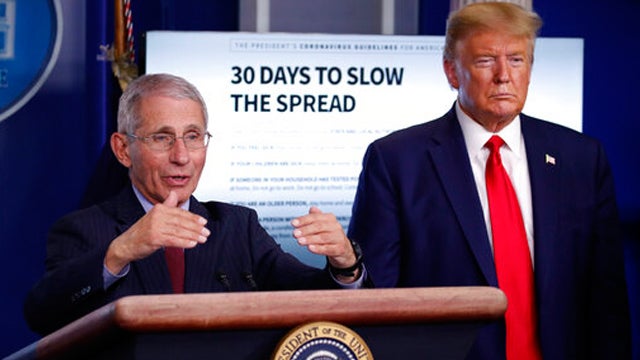 But yesterday, the model lowered the death projections in Tennessee from 3,000 to 587 and projected the state would need just 16% of the hospital beds in the state for coronavirus victims. Across the country the most recent data from a number of states indicates the number of new hospitalizations has been on the decline for several days, and the hospitalizations a key number.

Now, I’m gonna take a break. There is major contradictory news to all of this I just shared with you from Governor Cuomo’s briefing today. I’ll give you that when we get back.

RUSH: Governor Cuomo had his daily press conference at 11 o’clock today, and he had the new official numbers from New York, and the official count indicates that they thought they’d had a plateau and were on the downside of the mountain, as the saying goes. Today’s numbers contraindicate that.

New York state reported its deadliest day of the COVID-19 outbreak yesterday: 5,489 deaths, up from 4,758. Governor Cuomo said it’s an increase of 731. So the death toll went up in New York. It did not continue to decline. Now, again, there’s caveats to this. We don’t really know for sure how many people are dying of coronavirus versus people that had underlying conditions that the coronavirus may have hastened.

Cardiac arrest, diabetes, any number of things. What’s happening is that many deaths are being automatically recorded now as COVID-19 for — I don’t know, whatever — the simplicity; there may be some politics involved. But, anyway, this is the first increase day over day since last Friday, and everybody thought we’re on the downhill side in New York.

Now, the hospitalization numbers out of New York were good. They continue to fall. But — and here’s the thing — the death count in New York now is back up where these IHME projections were for New York. So these guys in the modeling business are all out there; they’re saying yesterday way overestimated.

Now the news out of New York today is that their original projection for New York looks like it was correct. Which means that maybe New York has not peaked yet. Scary thought, that maybe it hasn’t peaked yet. New York also now has more confirmed cases than Italy — and Italy, of course, was considered the absolute worst. It’s 138,000 cases in New York, 132,000 in Italy. But again, that could be that we’re just testing more.

RUSH: By the way, just a little factoid here. The Washington state model — the one we’re talking about, the IHME model — as of today predicted 784 deaths in New York for yesterday, which is still higher than the real number (it’s close), 731. But the point is in New York that the death rate did not decline — and I’ll tell you, there’s something else they’re using now, Mr. Snerdley. These are hospital deaths. They’re not…

A lot of people are dying at home. And they don’t automatically become part of the official tally because the classification of death at home, a lot of things are being chalked up to COVID-19 that may not be.

CALLER: So the reason I’m calling is just to state that the whole idea, even quoted by Governor Cuomo and everyone, was that the hospital system would be overwhelmed. I am an ICU nurse for a long, long time, decades. And if the hospital system is overwhelmed, more people will die and so forth. But now that we have a mass amount of hospital beds with the ships in each port, California and New York, and we have many, many ventilators coming in, all these masks coming in, and we can reallocate them to the areas that get hit hard, I don’t see why we shouldn’t be able to open up the economy. Because the whole idea was to not overwhelm the hospital system. 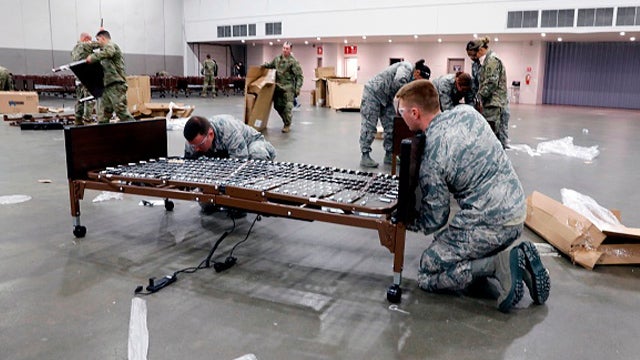 RUSH: Well, that was one of the objectives, we couldn’t overwhelm — you know, hospitalization numbers remain a curiosity here. They have never reached even the model projections. And if you look at hospitalizations, pick a random county, even in New York, this ship — which one is it? Is it the Mercy that’s in New York or is that the one in Los Angeles? I forget which, 20 beds. It’s got a thousand beds, 20 beds are being used. You know why they brought it in there? To handle cases that had nothing to do with COVID-19, to handle the heart attacks, the cardiac arrests, the what have you. There’s nobody in ’em.

By the way, this is another interesting little factoid. Routine hospitalizations for things unrelated to COVID-19 are way, way down. (interruption) The what? (interruption) Oh, the Comfort, right, the Comfort, the Mercy. I always get ’em confused. Anyway, the number of people going to the hospital for things unrelated to COVID-19 is way down, and so now the experts are trying to figure out why this might be, why are there fewer cardiac arrests, why are there fewer whatever it might be sending people to the hospital.

So now they’re talking about turning the Comfort in New York Harbor into a hospital for COVID-19 patients, but it hasn’t been needed for that. They set up a 2,000 bed hospital at Javits Center, and they’re not full. The hospitalization numbers have been a really key indicator of this. So Kathryn’s point is that since the hospitalization system has not been overwhelmed, it means that we can, in her mind, send people back to work.