RUSH: From The Federalist — this is Mollie Hemingway — “Trump Was Right, Cuomo Was Wrong About Ventilator Needs.” You know, one thing that has been axiomatic from the beginning of the Trump presidency, time in and time out, when Trump says something that drives the media nuts, makes them go insane, and it’s every day and it’s multiple times a day, it is later proven beyond doubt that Trump was correct, but by then everybody’s forgotten, nobody cares. Trump seldom gets any credit for being right, and he’s right so frequently. He is right so often. 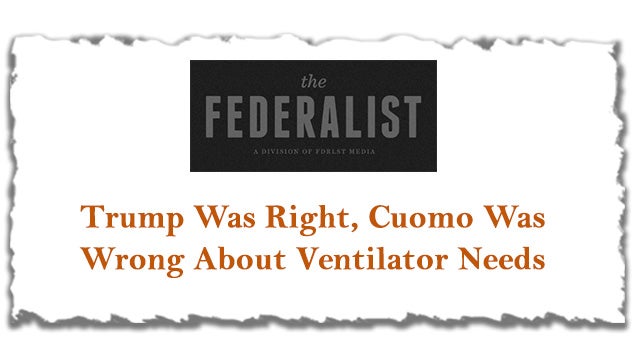 And he was right about the need for ventilators, and Andrew Cuomo was wrong. The media treated Cuomo’s claims — it’s interesting to go back and remember all of this. We’re flooded with data and we’re being flooded with numbers and it just all becomes a hodgepodge after not too long a period of time. Andrew Cuomo, the governor of New York claimed that he needed 30,000 ventilators. The media tweeted Cuomo’s claims needing 30,000 ventilators as legitimate and, man, you better provide ’em, Trump, Cuomo needs ’em.

The Trump administration said no, he’s not gonna need that many. Trump was pilloried by the media for questioning whether New York would actually need 30,000 additional ventilators or 40,000 additional ventilators as claimed by Governor Cuomo in late March. You ready? “New models –” here we go. “New models from the Institute for Health Metrics and Evaluation,” the famous now IHME, state of Washington, “show that New York already reached its peak projected ventilator usage on April 8, with a projected need of 5,008. The actual use may have been even lower.”

As of press time when this piece was published on the internet, not a single media outlet had revisited their reporting on the matter. Cuomo said 30,000, the media said, “He needs 30,000. Trump, where you gonna come up with them? Where’s the supply chain?” He gets a supply chain guy, they get him up there in the briefing. Trump says (imitating Trump), “We’re making ventilators, GM’s making generators, Apple’s making them, whoever’s making them. We got the best ventilators in the world, we got more ventilators than anybody, but New York’s not gonna need 30,000.”

The media said, “You heartless SOB. Cuomo knows what he needs, you don’t know what he needs, you’re just a doofus.” Trump was right. In late March it was a big story. Trump said that he doubted New York would need that many ventilators. A couple reporters at Politico framed the dustup in their article headline: “Trump Downplays Need for Ventilators as New York Begs to Differ.” Of course, Trump doesn’t care. Trump is presiding over people suffering. Donald Trump doesn’t care about New York. Cuomo a Democrat, Trump a Republican, all of this asinine politicization.

Here’s how The Politico story was worded. “Gov. Andrew Cuomo of New York says his state needs tens of thousands of ventilators to respond to the escalating coronavirus pandemic.

President Donald Trump doesn’t believe him. Speaking with Fox News’ Sean Hannity on Thursday night, Trump again minimized the impact of the infectious outbreak in the United States, casting doubt on the demand for so many of the respiratory devices in hospitals on the front lines of the disease. ‘I have a feeling that a lot of the numbers that are being said in some areas are just bigger than they’re going to be,’ he said. ‘I don’t believe you need 40,000 or 30,000 ventilators. You go into major hospitals sometimes, and they’ll have two ventilators. And now, all of a sudden, they’re saying, “Can we order 30,000 ventilators?”‘ The rest of the story continued in that vein.” Cuomo needed it, Cuomo’s the expert, Cuomo knew, Trump didn’t know, Trump disagreed, Trump’s not the expert, Trump’s a doofus. 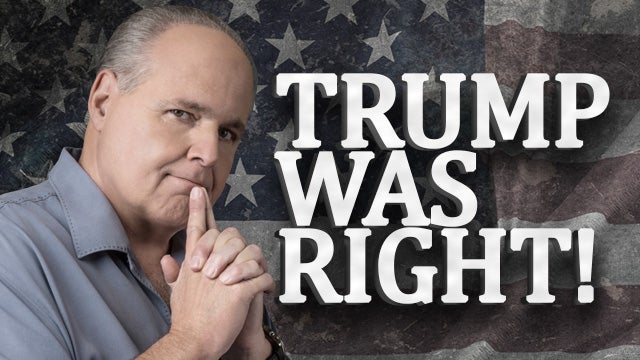 Here’s the story from STAT that I mentioned in the previous half hour. Headline: “With Ventilators Running Out, Doctors say the Machines are Overused for Covid-19.” (gasping) Really? How many of you — and it’s because of media reporting. You can’t be blamed. How many of you think that a lot of people are dying ’cause we don’t have any ventilators and we have such bad planning, we didn’t make enough, we didn’t have enough, we can’t make ’em fast, oh, my God. People are dying because we don’t have ventilators and the United States sucks. China’s got ventilators. Sweden’s got ventilators. United States, eh. How many of you believe this because this has been the reporting?

I’m starting the story now: “Even as hospitals and governors raise the alarm about a shortage of ventilators, some critical care physicians are questioning the widespread use of the breathing machines for Covid-19 patients, saying that large numbers of patients could instead be treated with less intensive respiratory support. If the iconoclasts are right, putting coronavirus patients on ventilators could be of little benefit to many and even harmful to some. What’s driving this reassessment is a baffling observation about Covid-19.” And this is really curious. “Many patients have blood oxygen levels so low they should be dead. But they’re not gasping for air, their hearts aren’t racing, and their brains show no signs of blinking off from lack of oxygen.”

I don’t know how many of you — you know, they’ve got these fingertip devices now that they slip your finger in and measure your temperature and your heart rate, your pulse, and your blood oxygen and they think if you’re below 93%, uh-oh. It’s crash cart time. I have to do this now so many times a week, it would boggle your mind. So I’ve learned about this. If you get 93% blood oxygen, uh-oh. Crisis time. You’ve got COVID-19 patients coming in with blood oxygen levels in the seventies, they should be dead, they should be gasping for air, their hearts should be racing, their brains should be shut down. And they’re not. They’re able to walk in. They’re ambulatory.

“That is making critical care physicians suspect that blood levels of oxygen, which for decades have driven decisions about breathing support for patients with pneumonia and acute respiratory distress, might be misleading them about how to care for those with COVID-19. In particular, more and more are concerned about the use of intubation and mechanical ventilators. They argue that more patients could receive simpler, noninvasive respiratory support, such as the breathing masks used in sleep apnea [CPAP machines] at least to start with and maybe for the duration of the illness.”

Put a CPAP machine on these people, put a mask over their mouth, over their nose and force air into their mouth and nose. You don’t have to hook ’em up to a ventilator that breathes for them. You just do it. “Sohan Japa, an internal medicine physician at Boston’s Brigham and Women’s Hospital, ‘I think we may indeed be able to support a subset of these patients. I think we have to be more nuanced about who we intubate.'”

Once you intubate somebody, it’s tough to get people off ventilators once you put ’em on them. Once they forget how to breathe, once they become accustomed to breathing with a machine doing it, it’s tough. It’s always a big moment of truth when they tell a patient, “We’re gonna turn the breathing machine off, just breathe.” They panic.

“None of this means that ventilators are not necessary … or that hospitals are wrong to fear running out. But as doctors learn more about treating COVID-19, and question old dogma about blood oxygen and the need for ventilators, they might be able to substitute simpler and more widely available devices.” 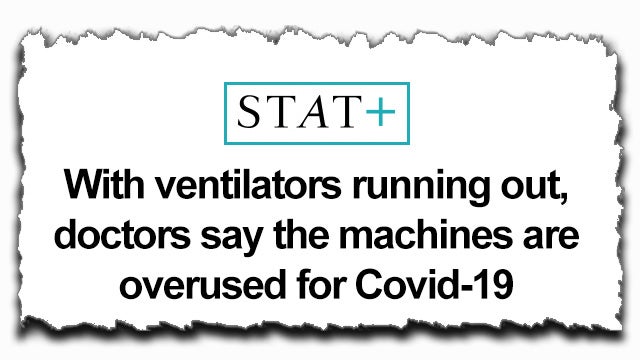 “The numbers say you should be on the road to death.”

“The numbers say you should be in trouble.”

“I’m not in trouble.” But you get to the seventies, they don’t even wait for you to talk about it. They run you off to the nearest emergency room they can. But people are showing up in the seventies on these, and the doctors can’t believe it, understandably.

“The numbers say you should be on the road to death.”

“Numbers say you should be in trouble.”

But you get to the seventies; they don’t even wait for you to talk about it. They just run you off to the nearest emergency room they can. But people are showing up in the seventies on these things, and the doctors can’t believe it — understandably. “An oxygen saturation rate below 93%,” blood oxygen, the amount of oxygen in your bloodstream, “has long been taken as a sign of potential hypoxia and impending organ damage. 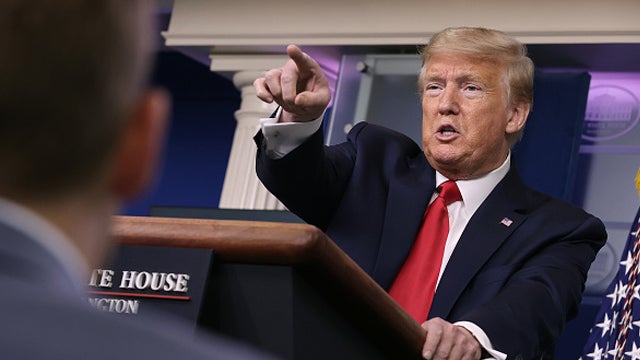 “Before COVID-19, when the oxygen level dropped below [93%], physicians supported their patients’ breathing with noninvasive devices such as [CPAP] and bilevel positive airway pressure ventilators (BiPAP). Both work via a tube into a face mask. … But because in some patients with COVID-19, blood-oxygen levels fall to hardly-ever-seen levels, into the 70s and even lower, [doctors] are intubating them sooner.

“‘Data from China suggested that early intubation would keep COVID-19 patients’ heart, liver, and kidneys from failing due to hypoxia,’ said a veteran emergency medicine physician. ‘This has been the whole thing driving decisions about breathing support: Knock them out and put them on a ventilator.'”

If they show up below 93%, it’s panic time. But they’re showing up at 70%; they’re still ambulatory, and they’re able to breathe. It’s one of the oddities, and they can’t figure it out. Now, “the first batch of evidence,” as doctors learn more about this disease, they’re questioning how and “how often mechanical ventilators” should be used. “The first batch of evidence relates to how often the machines fail to help.”

You want to hear some shocking numbers?

“‘Contrary to the impression that if extremely ill patients with COVID-19 are treated with ventilators they will live and if they are not [treated with ventilators] they will die, the reality is far different,’ said geriatric and palliative care physician Muriel Gillick of Harvard Medical School. … In a U.S. study of patients in Seattle, only one of the seven patients older than 70 who were put on a ventilator survived; just 36% of those younger than 70” on a ventilator survived.

“And in a study published by [the Journal of the American Medical Association] on Monday, physicians in Italy reported that nearly 90% of 1,300 critically ill patients with COVID-19 were intubated and put on a ventilator; only 11% received noninvasive ventilation. One-quarter died in the ICU; 58% were still in the ICU, and 16% had been discharged.”

Not being put on a ventilator has a higher survivability rate than being put on ventilators. This is what they can’t figure out. They’re on the way to figuring out what this means — tests, studies and so forth going on. “Researchers in Wuhan,” for whatever it’s worth here, “reported that, of 37 critically ill COVID-19 patients who were put on mechanical ventilators, 30 [of the 37] died within a month.

“In a U.S. study of patients,” again, “in Seattle, only one of the seven patients older than 70 who were put on a ventilator survived; just 36% of those younger than 70” survived, 64% perished. “In a study published Monday…” No. The numbers running together with Italy. But it’s website called STAT, S-T-A-T. We will link to it at RushLimbaugh.com.