Texas Salon Owner Sentenced to Jail for Opening Her Business!

RUSH: And then we go down to Dallas, where a salon owner was put in jail for seven days for opening her business instead of asking for a handout.

Her name is Shelley Luther. Audio sound bite number 17. This is yesterday in Dallas — Dallas, in Texas, one of the states that opened up — she’s being sentenced for opening her salon in violation of Texas’ order to close due to the pandemic. 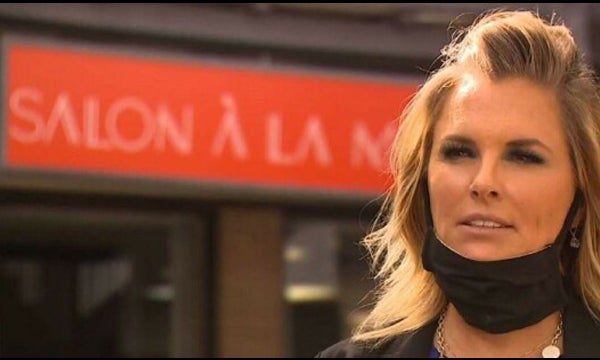 LUTHER: Judge, I would like to say that I have much respect for this court and laws, and that I’ve never been in this position before. And it’s not someplace that I want to be. But I have to disagree with you, sir, when you say that I’m “selfish,” because feeding my kids is not selfish. I have hairstylists that are going hungry because they’d rather feed their kids. So, sir, if you think the law is more important than kids getting fed, then please go ahead with your decision. But I am not gonna shut the salon.

RUSH: She’s just basically flying in their faces. (summarized) “Look, I’m not gonna ask for a handout. I’m gonna open my salon. My people working for me have to eat, their kids have to eat, my kids have to eat.” She literally was arrested for opening her salon because she and her stylists are having a hard time buying food.

They went back to work — and, for that, she’s sentenced to a week in jail. Folks, this is a tinderbox situation that is, I fear, being replicated in many parts of this country where these authoritarians are. You know, all politicians have a craving for power. It is a miracle the United States Constitution still rules the roost. It is an abject miracle.

It’s a just a piece of paper.

It’s just a series of pieces of paper with words on it.

It is amazing that after 200-plus years, everybody we’ve elected has decided to subordinate themselves and their power, their desires to it. I fear that’s coming to a change. I think some of these blue state governors and so forth are so infatuated with this new power that have had found that the natural authoritative tendencies that people in politics have…

That you’re incompetent. You can’t live without them. You can’t do the right thing unless they do it for you. You can’t spend your money wisely ’cause you’re not smart enough like they are. They have to do everything for you. Like this woman. “What do you mean, going back to work? You have violated the law!” Andy McCarthy tweeted something.

I don’t know if it was in relationship to this, but it could be. “Governments are created to secure our fundamental rights. If the Constitution still means anything, it is not your burden to prove your job is ‘essential.'” You don’t have to go out there and prove to anybody your job’s essential in order to stay open!

We’ll go to Urbanna, Virginia. This is Susie. It’s great to have you, Susie. Hello.

CALLER: Yes, we are.

CALLER: But we are Americans, Rush, and we have —

RUSH: Which is the problem. That’s exactly the problem the Democrat Party — you are seen as Americans. You fly the flag. That’s a problem.

CALLER: Well, it needs to be. It needs to be the problem, then. Because, you know, I don’t think this is ever gonna go away. But if we don’t speak up, we have to protect our own freedoms at this point. Like you were talking it’s supposed to be government’s job to protect our freedoms. It’s going the other direction.

CALLER: We need to protect them —

RUSH: Andy McCarthy said if the Constitution still means anything, the government’s role is to secure your rights, to secure your freedom from people who would want to take it away from you.

RUSH: Well, I’m sorry, but the Democrat Party is seeking to usurp your freedom for what they claim is the common good, which is shutting down the economy to make sure nobody gets sick, to make sure that the death toll remains less than it could be or what have you.

CALLER: Okay. Had you ever heard of something called the 99 Cents Lobby?

RUSH: Have I heard of something called the 99 Cents Lobby? No, I’ve heard of the Ninety-Nines, though, which my mom was a member. It’s all female pilots that had a race every year.

RUSH: Well, looky here. It looks like we’ve got some reason happening in Texas. The Texas attorney general has told a judge down there to free the woman who was unjustly jailed for operating her hair salon. I wondered, how the hell did this happen in Texas anyway, when this first happened. Texas?

Anyway, Texas Attorney General Ken Paxton today sent a letter asking a Dallas judge who ordered a woman confined in a penal facility — and, by the way, for those of you in Rio Linda, penal has nothing to do with sex. It’s a jail. You’re familiar with jails, Rio Linda. It’s what penal is. Don’t anybody go thinking that I’m talking about something I’m not. I want everybody to understand here.

So the Texas AG sends a letter to the judge who ordered a woman confined in a penal facility to free her after she was sent to jail yesterday refusing to apologize. By the way, that’s why she was sent to jail. She refused to apologize for keeping her hair salon open in violation of the governor’s order aimed at slowing the spread of the coronavirus. Soon after the governor, Greg Abbott, said he agreed with his attorney general on the matter.

Now, the woman, Ms. Luther, was given three choices by the judge. She could offer an apology for selfishness, she could pay a fine and shut down until Friday, or serve jail time. She said (paraphrasing), “I’m not gonna apologize for this. My employees need to eat. Their kids need to eat. My kids need to eat. We’re not asking anybody for handouts. We’re going to open up and work.”

“Well, well, we’re gonna send you to jail for that,” said the judge. Representative Briscoe Cain in Texas said, “Hairstylists and the cosmetology industry don’t have a lot of lobbyists in the Capitol advocating for them whereas maybe the big box stores and large restaurant chains do and sadly they were overlooked when this should have been an industry that was opened first, because of how regulated they are and the health standards they have to comply with.”

So this guy is saying, “Why were they not even thought of when the opening orders were given?” So you wait. Somebody’s gonna say, well, the answer here is to unionize hair salons. That’s what they’re gonna suggest. You watch.