Democrats Demand You Wear a Symbol of Fear

RUSH: Oh, do you know what I heard right before the program started? This is another great illustration of a point that I’ve been making for I don’t know how long. A quarterback in the National Football League — and I didn’t see it. It was not videotaped so I don’t know who it was. But a current quarterback in the NFL actually said, “Look, I don’t want to get political, but I would like to get back to work.” 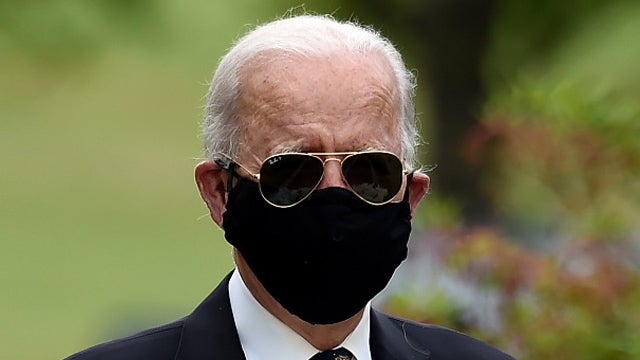 Now, when the hell did going to work become political? Right now — right here, right now — and who has made this possible? Joe Biden and the Democrat Party, all these mask-wearing freaks demanding that you use the symbol of fear, demanding that everybody wear the symbol of fear. I know why some people believe in masks, and it’s because of the success that we’ve had at grocery stores.

But that’s not the point, because that’s not the motivation behind the Democrats and their demand for masks. Their demand for masks is political. Everything is political. They hope to capitalize on the image they’re creating that we’re all about to die — that we’re all very, very near being wiped out — and only those who wear masks are gonna be safe and only Democrats advocating the wearing of masks care about people.

It’s kind of like the old red AIDS ribbon. You put the AIDS ribbon on, and what does it say? Nothing! It says, “I’m better than you; I care. You don’t care because you’re not wearing this ribbon. This red ribbon makes me a better person than you!” Well, that’s how they’re using the mask now, and it’s gotten to the point where an NFL quarterback says, “I don’t want to get political, but I’d kind of like to go back to work.”

Speaking of this — let me find this very quickly — the North Carolina governor has changed his thinking on the mask, and it is noteworthy. Be patient with me as I go through the Stacks here, because… (shuffling papers) This is typical. You know, I think I’ll get to it in the third hour, so I put it near the bottom, and that means I’ve gotta go through most of the Stack to find it.

I may even be looking in the wrong stack, but I’m gonna find before I move on and forget it. (shuffling papers) But it’s classic about how they’re changing their motivation behind the mask, what the purpose of the mask is and what it says about you if you don’t… Well, I can’t find it. That’s also very, very typical. But it’s essentially the mask isn’t about safety now. The governor of North Carolina has made it clear: The mask isn’t about safety.

All you have to do is notice suffering here, misfortune over there, and point it out. And that makes you a good person. That makes you a compassionate person. And you’ll run around, you’ll get awards from people for caring. And that is exactly how — the mask and some of the other things — the left is now attempting to maintain their moral superiority when they have none, and it’s also a way…

RUSH: Here, I found a Roy Cooper tweet, Governor Roy Cooper of North Carolina. Unmasking. Remember, the mask, that’s supposed to make us safe. Keep everybody safe. Keep you from infecting anybody and to keep you from getting infected. Well, let’s see. Yesterday governor Cooper tweeted the following: “A face covering signifies strength and compassion for others. Wearing a mask shows that you actually care about other people’s health.” 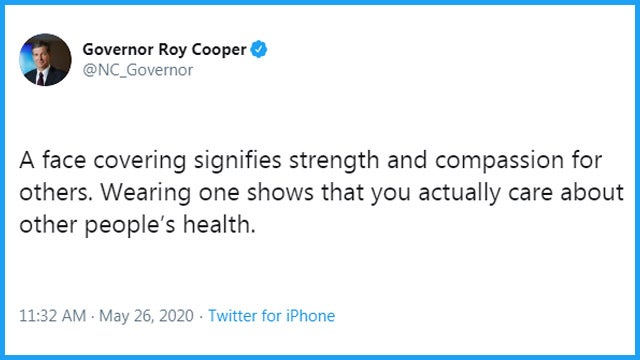 I mean, this is right out of the AIDS red ribbon handbook. So now we’re not wearing masks to stay healthy. We wear them as a symbol of “strength and compassion.” The problem with that is when the standard-bearer and the titular head of your party is Joe Biden, there is no way that Plugs is a symbol of strength or anything else looking like the idiot he is wearing that mask.

This is virtue signaling.