Same Church, Same Book, But Where Was the Outrage?

RUSH: So the deep state, the establishment, the elites, whatever you want to call ’em, they’re not gonna let up trying to make Donald Trump out to be a dictator, all because the Park Police cleared Lafayette Park 15 minutes before curfew. I want to show you a couple of pictures. Put the picture up of Trump at St. John’s Church. 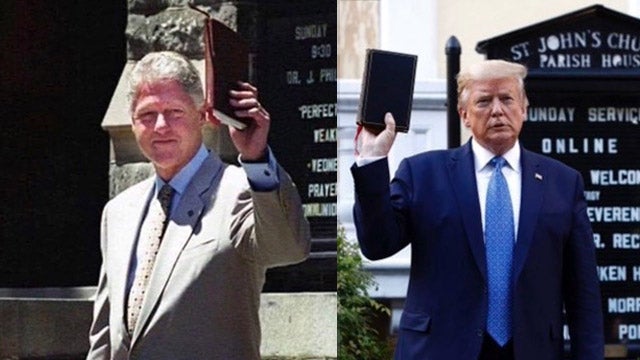 This is what’s got ’em so bent out of shape.

“How dare he! Why, he took a book, the Bible — which he hasn’t even read, probably — and he used the military to clear out decent Americans so he could get a picture!” When did the Park Police become “the military” anyway? So, anyway, there’s Trump, the photo-op. This has just sent them to orbit. Let me show you another picture.

Put the one of Bill Clinton up. There’s Bill Clinton in front of the same church if you’re watching the Dittocam. Same church. Same book, the Bible. Clinton walked over there to try to distract everybody that he was shtupping the intern with a cigar and with a slice of pizza.

He went over there “to try to get closer to God,” and they didn’t think a thing of it. Trump went to the church to celebrate people coming together to repair it after it had been torched the night before! When Clinton goes over there with his Bible, it’s a beautiful thing and nobody’s worried about anybody becoming a dictator.