Folks, these people continually fire rubber bullets, live ammo, every political weapon they have. They keep firing at Donald Trump, and it doesn’t even wound him, much less take him out. So he had a press conference — well, it wasn’t a press conference. He had a little ceremony today in the Rose Garden, and he just kept going and kept going. He was ebullient. He was happy. Any right-minded, reasonable person would be happy. America’s coming back. Exactly like he said that it would, exactly like he knew that it would. And he knew that it would because he knows the American people. He understands the American people.

Why? ‘Cause he has empathy for them. He has the ability to relate. He knows that being locked down goes against everything that Americans are. And when the opportunity to get back out and get back to it presented itself, why, you see what happened.

RUSH: So, look, we have a roaring economic recovery underway as predicted by Donald Trump: 13.3% unemployment, 2.5 million jobs added.

We got no help from the states of New York, California, Illinois. Any of these other blue states that are still shut down, they can’t claim any credit, and they’re not participating in this recovery, either. The red states have made this happen. The red state people are going back to work, accepting responsibility, reopening their businesses. 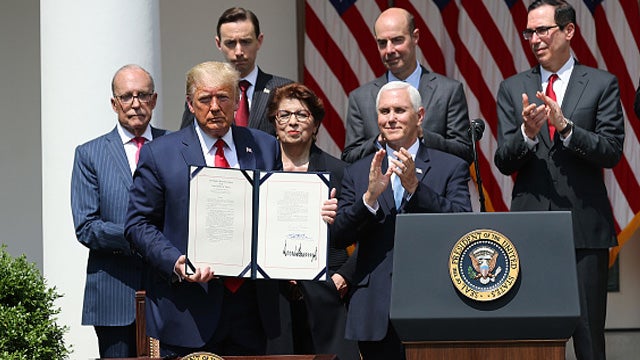 I heard today — it might have been Mnuchin who said it, or it could have been Larry Kudlow — that 80% of America’s small businesses have reopened or are in the process of reopening. The red states are once again carrying the water, carrying the weight, carrying the day — and you’re damn right it’s a competition, and you’re damn right we do not want to unify with places where things are falling apart and where there is no effort being made to reverse that direction.

You want to hear an interesting thing from Politico? Politico had a tweet this morning at 8:15. By the way, the market… Let me check it. It’s been flirting with up a thousand today. Let me see what it is at this very moment. Uh, it’s up about 900 — no, 848. It’s been up as high as a thousand. It’s been over 27,000. It’s a massive, massive recovery in the stock market as well.

A lot of people are invested there with their 401(k)s and so forth and may not even know it. Politico’s tweet at 8:15. Everybody’s expecting that at 8:30 when the jobs numbers are released, that it’s gonna be more great news for the Democrats. Oh, yeah! What does that mean? It means more misery. It means more rock-bottom economic news. It means more depressing news. It means America can’t remain as it is.

So here’s The Politico tweet 15 minutes before the May jobs report was released. Quote: “Welcome to jobs day. [I]t’s going to be another terrible one but perhaps not as terrible as many previously feared. Consensus” opinion among economic experts “is for a loss of 7.8 million jobs in May and a jump in the unemployment rate to 19.5 percent.” 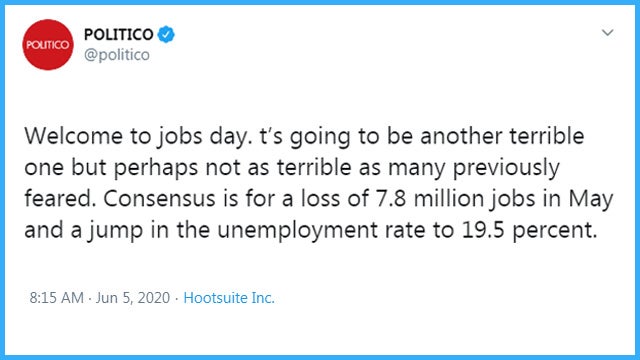 That was Politico’s tweet 15 minutes before the numbers were released. They couldn’t have been more wrong — and, as a result, they couldn’t have been more disappointed. We have audio sound bites from the Drive-By Media, many of whom are having trouble covering their disappointment, while having to admit it’s a great bit of news and it’s a great day for Trump — and that Trump was, sadly, right.

“Welcome to jobs day. [I]t’s going to be another terrible one but perhaps not as terrible as many previously feared. Consensus is for a loss of 7.8 million jobs in May and a jump in the unemployment rate to 19.5 percent.” Instead, 2.5 million jobs added, and unemployment down 13.3%.

RUSH: Now, by the way, along the lines of this economic report today — and we hope that it is a trend. We hope it’s the beginning of a trend, and it will be. Jeff Cox, who is a reporter at CNBC, says this is the biggest jobs report in history. Employment is up by 2.5 million jobs in May and the jobless rate is down to 13.3%, far better than economists have been expecting.

It indicates that an economic turn could be close at hand. It probably has already begun — and again, “the experts” are totally stunned, totally shocked. Why do these experts survive as experts when they, by definition, are never right? They’re always shocked; they’re always surprised, no matter what the news. I’m asking rhetorically, obviously.

“Rush, that’s crazy.” No. In terms of numbers of jobs created and the impact on the unemployment number, it’s huge, folks. It’s literally huge, especially when you look at the forces arrayed against it happening. New York, California, Illinois, all these blue states continually shut down — which leads me to another thing.

You remember when Ron DeSantis and Brian Kemp, the governors of Florida and Georgia, were ripped to shreds for their decisions to open up? Not here. On this program, they were applauded. They were thanked; they were praised, because they were courageously taking steps to save their states, to save the people in those states and save the country — and they were right.

RUSH: This is where the new jobs came from: 669,000 goods-producing jobs, 464,000 jobs created in construction, and 225,000 jobs in manufacturing. That continues. You remember that? Those are the jobs that Obama said in 2015 were never gonna come back. He went out to Ohio and took a swipe at Trump. (impression) “Well, what’s he gonna do, uhhh, wave a — a magic wand?

“What? How, how, how is that gonna happen?” No, no magic wand. Just a belief in capitalism and the right kind of policy. Speaking of Obama, you know there was big fanfare for this big streamer Web address he was gonna make with Eric Holder a couple nights ago. Anybody see it? It wasn’t… It was kind of like a (pfft!) I mean, if it had been something, the Drive-Bys would be plastering our faces with it.

But it kind of was like Michelle (My Belle) Obama’s Netflix thing, kind of a bomb. You know, that had to let a lot of people down. Anyway, there were 368,000 new jobs in retail and 1.29 million new jobs in leisure and hospitality. There’s a lot of small businesses in there. That’s a lot of restaurants. Could be a lot of things like the casinos reopening in Las Vegas. One other thing here about African-American unemployment.

The Drive-Bys have been going out of their gourds today trying to demo that the African-American unemployment did not improve. In fact, April Ryan shouted at the president at the end of his Rose Garden appearance, “Hey! What do you mean? African-American unemployment didn’t go down! How can you say there’s a recovery?” Well, Charles Payne at Fox Business says that black Americans did see job gains last month, despite media efforts to suggest otherwise.

There were 283,000 black Americans who got jobs in May. That’s real-life U-4 unemployment rate, 16.8 from 16.7. The U-4 is the actual jobs. The U-6 is the unemployment rate that we see reported every day, and it’s a convoluted calculation based on a lot of projects. But his point is in terms of real jobs, 283,000 new jobs for black Americans were created or happened during the reporting period.