RUSH: I mentioned earlier Victor Davis Hanson and a piece that he has today on the website PJ Media called, “How Cultural Revolutions Die — or Not.” He’s a brilliant historian. He’s an expert on the Peloponnesian wars, but he has also spent years studying worldwide revolutions.

And so a couple of pull quotes from his piece. “Unlike coups or political revolutions, cultural revolutions don’t just change governments or leaders. Instead, they try to redefine entire societies. Their leaders call them ‘holistic’ and ‘systematic.’ Cultural revolutionaries attack the very referents of our daily lives. The Jacobins’ so-called Reign of Terror during the French Revolution slaughtered Christian clergy, renamed months, and created a new supreme being,” that they called “Reason.”

“Eventually,” he writes, “the architects of cultural upheavals always make two miscalculations. One, they presume that destroying things will never apply to themselves, given their loud virtue signaling. Two, if they are fingered by the mob, they assume they can somehow use their clout and influence to win an exemption.” The architects, the founders, the leaders of a cultural — meaning the people that start a movement think they’re always gonna be immune from whatever happens as the revolution grows. 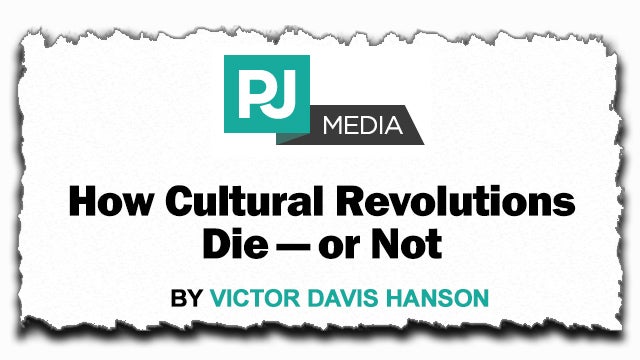 “We’re seeing that now,” he writes. “Liberal sympathetic bystanders are wondering whether downtown arson and looting will go private and reach their suburban homes.” The Bill Gateses of Seattle, the people that are living far away from CHOP and feel relatively safe, they’re bystanders. They’re not participating in any of this. They are liberal Democrats, and they probably support it, but they’re never gonna be seen anywhere near one of these riots. And they’re wondering whether all of this destruction happening downtown will reach their suburban homes.

And they’re asking themselves, do they really want their universities where their kids go, do they want their Washington and Jefferson monuments, they want them defaced? They want ’em renamed? What happens when calling 911 gets a constant busy signal? His point is that far from being universally accepted, that there are people within these movements who don’t trust them, who are wary of them, but will never say so ’cause they’re scared to death.

“When a liberal mayor or black police chief or progressive governor or white leftist who diverges from the party line is targeted by the mob, then who really is safe? Answer? No one. And so the cultural revolution sputters to irrelevance. What deflated the MeToo movement was the high toll that the accusations took among the Hollywood and cultural elite. Suddenly, progressive celebrities began demanding evidence and insisting on presumed innocence when their careers were destroyed.”

Never thought it could happen to them. The #MeToo movement was something that was gonna happen to somebody else. Then when it started to happen to them, that’s when it ended. And you know when it really ended was when the Democrat Party nominee is accused of abusing a woman. That’s when it ended. Bye-bye, #MeToo. Tara Reade became the first woman to automatically not be believed because of who she said her attacker was.

And Mr. Hanson believes that this is a forerunner for things that will happen to the movements that are out there now. “The present madness will wane like a virus, as it eats its own and terrifies its sympathizers that they may be next — unless, of course, a would-be Napoleon uses a ‘whiff of grapeshot’ and turns the mob into his personal cult. The armed rapper Raz Simone, who some say lords over the ‘Capitol Hill Autonomous Zone’ in downtown Seattle, so far has neither the diabolic talent nor the resources to spread his anarchy.”

“A final thought: cultural revolutions not only eventually die without cruel dictators, but they can spawn dramatic pushbacks. Ronald Reagan was the answer to the radical Sixties. Revolutionaries are now sowing the wind, but they have little idea of the reactive whirlwind they may soon reap.”

He is very confident that there’s gonna be a major pushback on this. My guess, it’s landslide Trump election victory, and can you imagine if that happens, what this is gonna do to these people? Oh, folks, you definitely want to be around to see that.