How Will This Moment of Marxist Madness End?

RUSH: Lisa in Chicago, it’s great to have you on the EIB Network. Hello.

CALLER: Hey, Rush. How you doing? You sound great.

RUSH: I’m fine and dandy. Thank you very much.

CALLER: All right. So I’ve been listening long enough to know that you are correct. I think it’s 99.6% of the time?

CALLER: My apologies. So I’m just sick and — I’m sick. I’m sick about what’s happening. So I need you to say what’s gonna happen. How’s this gonna end?

RUSH: Well, I don’t actually know yet how it’s gonna end. All I could do is tell you how I hope that it ends, which would probably dovetail pretty closely with your desires. But there’s too much that remains unpredictable.

RUSH: In fact, all the future is unpredictable. I don’t think anybody knows how this is gonna end. I mean, right now, do you see much pushback against it?

CALLER: And it makes you think you’re crazy.

RUSH: Let me just tell you this. This stuff isn’t gonna just go away. There are gonna be elements of it that eat itself. They’re gonna implode on themselves in part. But it isn’t just gonna go away. These groups have been around for 30 years, 25 years, Occupy Wall Street, Black Lives Matter, whatever the Clinton name — I forget what it is. But they’ve been around a long time.

RUSH: The bottom line is these people are not just gonna go away, no matter who they are. I was thinking of MoveOn.org, Occupy Wall Street, Black Lives Matter, it’s all the same bunch of people. They just organize under different names. It’s the same bunch of people, which is one of the reasons I am frustrated.
This needn’t have gone on this long. The problem is we have a media that enamored of anti-Americanism. They just love it. They love the chaos and the conflict. It’s one of the reasons why they’re sympathetic for African-Americans. Anybody’s got a grievance against America is automatically lavished with instant credibility and praise.

CNN are interviewing this practically illiterate clown running the CHAZ/CHOP that commandeered a six block area of Seattle, and they’re giving this guy a legitimacy of a head of state. And they’re asking him what he thinks about this and what happened there. The mayor is finally demanding — hey mayor, it’s too late for you to be making demands, babe. Mayor Jenny Durkan, hey, you can’t start making demands after giving ’em a six block area. They own you, Mayor. You can’t just now demand that they leave. You don’t have a police department to make ’em leave anyway, do you? 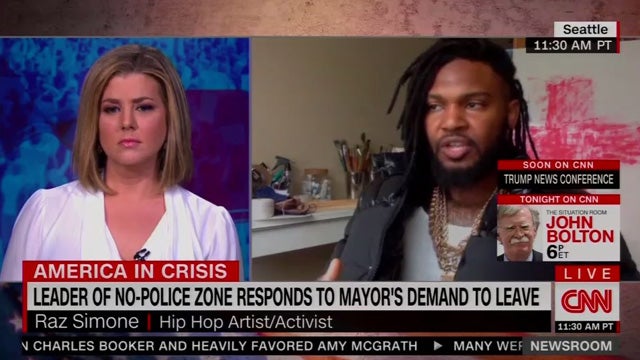 So anyway, here comes the media legitimizing a bunch of spoiled, rotten little kid malcontents. And nobody’s got the guts to shut ’em down when they start destroying American history. So how does it end? It’ll end when somebody decides they’ve had enough. I had a story yesterday — I forget who wrote it — but it was somebody accurately describing a certain percentage of the people in this country as being unwilling to try and stop it.

Hey, Republicans, you don’t got it now. They’ve been afraid of being called racists or bigots or what have you. Until we can get over this notion that being a minority allows you carte blanche to destroy anything you want, this is never gonna end. Being disadvantaged, being a minority, having a grievance, being poor, whatever it is, being gay, being somehow out of the mainstream, if that’s what you think gives you the right to destroy whatever it is that irritates you, and if nobody’s gonna stand up for what’s being destroyed — and we know that more and more people aren’t, in a whole bunch of different walks of life. 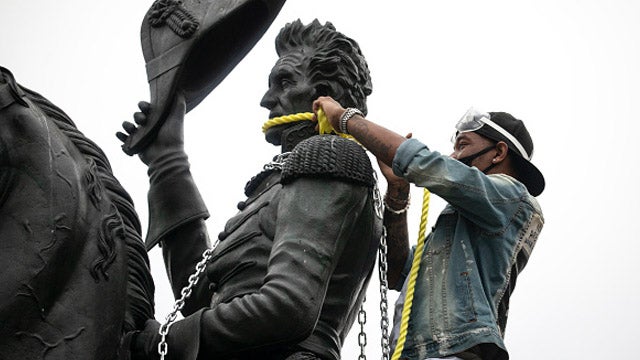