RUSH: There is an incredible story here out of Houston that I’m gonna be putting a couple pictures up on the Dittocam for those of you who subscribe, are members at Rush 24/7, to see. Here’s the upshot. On Tuesday a pro-Trump media personality, Ashley StClair, tweeted a screenshot of a really disgusting threat that she received, writing, “This is why I own guns.” 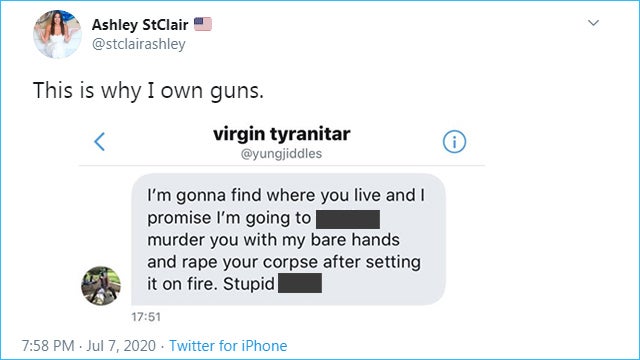 The message she received said, “I’m gonna find where you live and I promise you I’m going to [f—ing] murder you with my bare hands and rape your corpse after setting it on fire. Stupid [c-word].” Well, the sender is a teaching assistant at the University of Texas San Antonio.

RUSH: I want to finish this story ’cause we got photos. And, again, it’s out of Houston. There is a media personality there, pro-Trump, named Ashley StClair, and she tweeted a screenshot of a vile threat that she received explaining, “This is why I own guns.”

And, again, the message that she got said this: “I’m gonna find where you live and I promise you I’m going to [f—ing] murder you with my bare hands and rape your corpse after setting it on fire. Stupid [c-word].”

An online investigator was able to uncover the identity of the clod who sent the threat. It’s a liberal college professor teaching assistant. These are the people that never have to go to diversity training, right? Oh, no. They are properly sensitive. Oh, yeah. They understand never offending people. The guy that sent that threatening message is named Jonathan Pullen. He’s a teaching assistant at UT, U-Texas, San Antonio. She posted a picture of this clown as well. 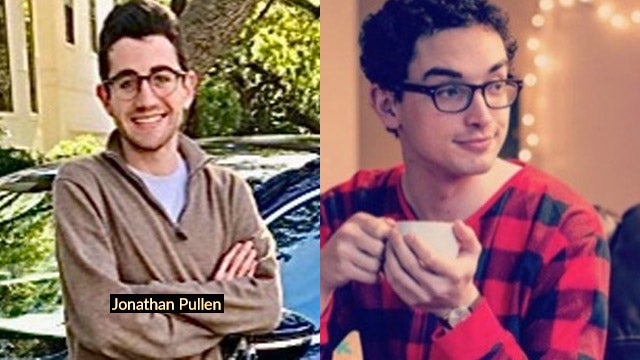 So we have the picture of the guy, and I want to put it up here. This is him. Make the switch over there, Brian. This is the guy, if you’re watching on the Dittocam, this is a teaching assistant at University of Texas San Antonio, Jonathan Pullen, who sent that vile message to Ashley StClair.

Now, I want to show you a picture of the Pajama Boy from the Obamacare sales network. Put that picture up next. Wear pajamas, drink hot chocolate, talk about getting health insurance. This is an Obama-sponsored ad to sell Obamacare to young people in their pajamas. This Pajama Boy guy is gonna forever be a featured player on the Rush Limbaugh program.

Now, go back and forth, show us Jonathan Pullen again. Does this guy not look exactly like — I’ll tell you, I don’t think this guy could get it up to rape anybody, even a burned corpse. (interruption) Well, I’m sorry, he introduced the subject, Dawn. This guy looks like a wimp from the get-go.

These brave little metrosexual type guys sitting out there threatening people and sending all this vile stuff while supposedly occupying the moral high ground of diverse and understanding, they’re not racist, they’re not bigoted, they don’t hate women and so forth. You find out that the biggest reprobates in our society are found on the American left and within the Democrat Party.