RUSH: There’s other news out there besides politics. Well, that’s not correct, because everything is politics now. Sadly. You really can’t take politics out of anything, because the left has infused politics into practically everything. Here’s, actually, a good example of that. Here’s the headline: “NFL to Ditch On-Field Anthem Singers This Season, and Military and Police Honor Guards Could Also Be Limited.”

Now, why do you think they’re doing this? There’s already gonna be very few NFL stadiums with fans. Jerry Jones of the Cowboys says that they will be playing before a live audience. They’re gonna have fans in the stands at AT&T Stadium. I don’t know how many, and I don’t know they’re gonna do it, but Jerry Jones is promising that there will be fans. Other teams, franchises are saying there won’t be any fans.

But I think that this is something that has long been an objective of the American left. Do you all remember — and I don’t know how many years ago this is now, but it’s gotta be at least five and maybe more — there was a survey that came out that found that the sight of the American flag on the Fourth of July with patriotic music tends to make people vote Republican.

It tends to make people support Republicans. In other words, the flag and the outward signs of patriotism naturally incline people toward the Republican Party. It makes perfect sense to me. The American left, the Democrat Party has made it abundantly clear over the years that they are anti-outward signs of patriotism. I mean, it’s two decades now that American TV anchors do not feel comfortable wearing American flag lapel pins.

Because it’s compromising their objectivity, you see. “Oh, yes. Yes. Can’t show favoritism.” Even though you are an American. (laughing) Even though the library of your freedom — the Constitution — is a distinct American thinking. “Nooo, I can’t. I can’t show my favoritism.” And I think ever since that survey came out — and it was a Harvard… It has something to do with Harvard.

I think it was a Harvard survey or it was something that took place — the results of it were — in Cambridge, Massachusetts. And I thought ever since then, the left has been doing everything they can to limit such patriotic displays as the flag at sporting events. And so here comes the NFL. They’re gonna ditch on-field anthem singers. They’re gonna ditch military and police honor guards. They could also be limited. 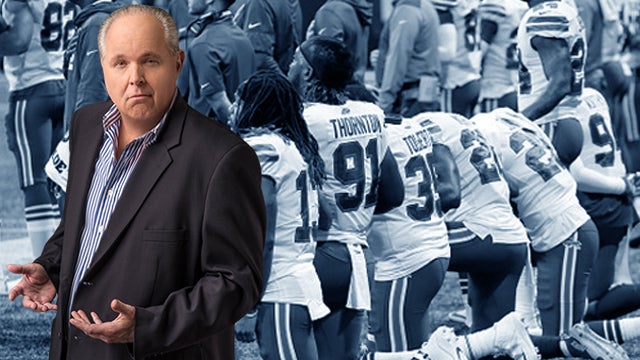 I think, folks, this is the real goal of the left through all of these years of digs at the NFL and at football in general: Get them to remove all ties to anything patriotic at these events. I think the effort is also underway and would have been more so under college football had they decided to play this year. But it is true — I’ll never forget it — seeing patriotic images made people tend to lean right and vote Republican.

And ever since then, the Democrat Party has been hell-bent on getting rid of these symbols. So when Kaepernick came along and started taking a knee and protesting the flag, oh, that was nirvana. That’s one of the reasons they supported it. It was one of the reasons that Kaepernick had so many people on his side, is because it fit right in with this objective of limiting exposure to patriotic symbols such as the American flag.