Rush Reflects on His Conversation with President Trump

RUSH: Folks, there are couple things I want to do. I didn’t… You never get to do everything you intend to do when you have a rally or an appearance like this, because it goes into areas where you don’t plan on it going and you have to adapt and so forth. I’m not complaining. But I want to share with you some of the questions that we had from people that the president ended up answering without my having to ask them. 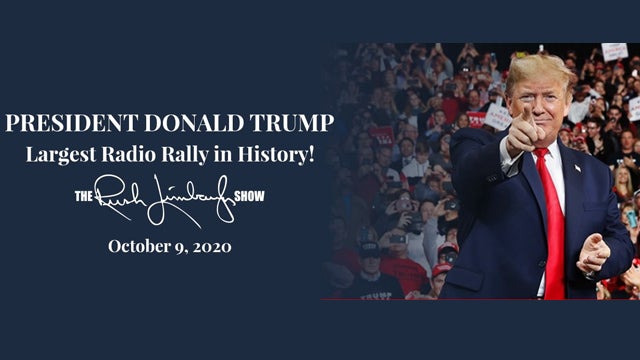 And when we told them we were gonna go commercial-free, they understood completely. And they are just great people. And their businesses are fabulous people. And I wanted to mention some. I can’t mention all. Boll & Branch, SimpliSafe, Level Select (which is the CBD company), LifeLock and Norton 360, are some of the sponsors today — Hillsdale College — that were that were relishing being heard in the program and understood — SimpliSafe Home Security.

I really owe them a thank-you for allowing… I mean, they had purchased the time, and we’re gonna make it good, obviously. But these are some of the finest businesspeople in America. We are honored and flattered to have them as business partners: Boll & Branch, Level Select (which makes the CBD product that we advertise), Norton 360, LifeLock, SimpliSafe Home Security, Boll & Branch. They’re just incredible people to do business with.

So I wanted to give the president a chance to respond to Biden, some of the things that he has said.