RUSH: There was a story in the New York Times on Friday. I didn’t see it because I do not read the New York Times. It was pointed out to me. The first note I had about it was from a friend of mine in Israel. And his note did not say anything about the story, which is typical because everybody thinks I did see it. His note was something along the lines of, “Well, I see the New York Times has discovered you again as a leader of the conservative media and thought apparatus in America.”

I said, “Well, that’s still not enough to make me want to read it.” So, I didn’t. I have better things to do. And why do I want to read something that is largely probably going to be wrong about me? Well, eventually I got around to reading it. And I don’t remember why. Title of the piece is, “Talk Radio Is Turning Millions –” You know, folks, there’s an object lesson in this for me, for everybody, in regards to the media.

By the way, Amy Coney Barrett has begun her opening remarks. I guess she’s through now. She put her mask back on, took the mask off for the remarks, and now I guess her supporting witnesses are speaking in her behalf. The headline: “Talk Radio Is Turning Millions of Americans Into Conservatives,” like they just discovered this. And then the sub-headline of the piece: “The medium is at the heart of Trumpism.” 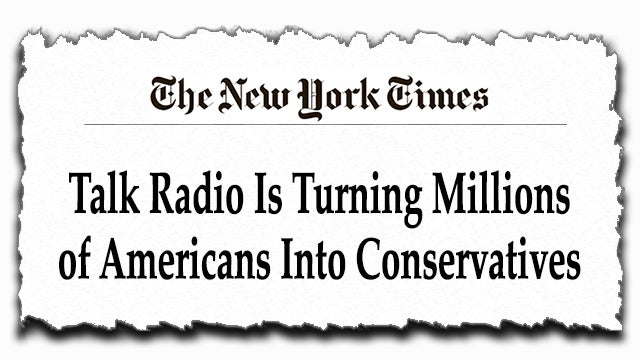 And so I read the piece, and like every piece about talk radio, it starts off being glaringly wrong about audience size. At its minimalist, we have 20 million listeners, unduplicated in a week. That’s at the least. You throw our computer model projections in like the computer model projections projecting the number of COVID-19 cases, our audience can be upwards of 35 to 40 million, sometimes as high as 50. But actual figures from media ratings outfits, 20 million is the bare minimum. And yet this story reports it as 15.

“At least 15 million Americans every week tune into one of the top 15 talk radio programs. They are not monolithically conservative, but they are overwhelmingly so. … Talk radio’s power is rooted in the sheer volume of content being produced each week. The typical major talk radio show –” There’s really only one of those, and it isn’t typical. But I digress.

“The typical major talk radio show is produced every weekday and runs three hours, so just the top 15 shows are putting out around 45 hours of content every day. Even setting aside hundreds of additional local shows, the dedicated fan can listen to nothing but conservative talk radio all day, every day of the week, and never catch up.

“Yet talk radio still somehow manages to fly below the national media radar. In large part, that is because media consumption patterns are segregated by class.” So, here we go. “If you visit a carpentry shop or factory floor, or hitch a ride with a long-haul truck driver, odds are that talk radio is a fixture of the aural landscape.” That means people that get their media hearing. “But many white-collar workers, journalists included, struggle to understand the reach of talk radio because they don’t listen to it, and don’t know anyone who does.

“Moreover, anyone who wants to make an effort to understand talk radio runs into a barrier immediately: Because of the ocean of content, one must listen to it at great length, a daunting task for anyone not already sympathetic with a host’s conservative views. The time commitment suggests the depth of listener loyalty.”

Anyway, the story is completely filled with cliche after cliche and incorrect fact after incorrect fact. Incorrect fact number one: The audience is 15 million. In no universe is this program’s audience that small. Number two: The idea that the only people that listen to talk radio are hayseed hicks who work in carpentry stores or sit in the cabs of long-haul trucks. But the real educated, the elites, the people that wear white collars and maybe even a tie now and then, they don’t listen to it, they don’t know anybody who does.

None of this is true. 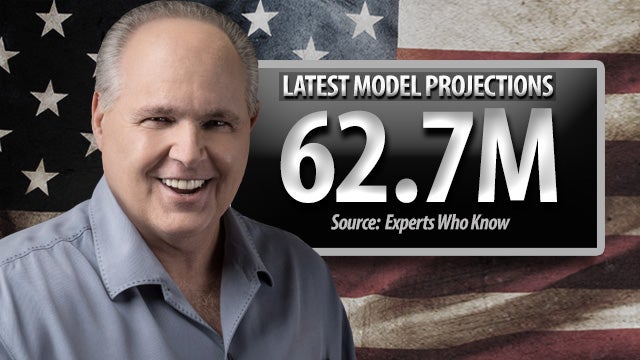 But here’s the point, folks, one of many points. Not long ago, not all that many years ago, the very same New York Times Sunday magazine ran a cover story on me and this program. And it was a long story. And it was devoted to the power of my talk show. It was devoted to the power that I wield personally. For the most part it was actually a favorable piece. And my point is here that now we are some years later, and not all that many. This story comes as though the previous story’s never been written.

It’s like the New York Times is not aware of all the stories they’ve done on me or conservative talk radio in all the years in the previous 32. Like this story that ran Friday is the first and nothing came before it. As though the subject or the topic of the dominance of talk radio is something just now occurring to the New York Times. Paul Matzko is the writer. He just now stumbled into this truth, the subject of the dominance of talk radio, something that just occurred to him. Well, it could well be. You know, there’s a generational change theory out there.

This program has been around 32 years. That’s easily a generation and then some, calculate a generation to be 25 years. So it’s entirely possible that there are employees at the New York Times who have never listened to this program, and do not know it exists. They are Millennials, they are recent college graduates or what have you. They probably have heard of it, but it’s not in their daily diet. No talk radio is. You know what this story makes a big claim of saying? Podcasts. Podcasts, yeah, that’s the future, you know why?

I’ll tell you about podcasts, folks. I don’t want to be overly critical here. Podcasts are the left’s attempt at talk radio ’cause they can’t succeed in it. The reason there’s no liberal on talk radio is as simple as why Joe Biden has no bond with his supporters. They do not have that relationship with people that support them. I do.

Joe Biden has no bond. These liberals do not have a personal connection with anybody in their audience, even if they’re comedians, even if they’re stand-up, they just don’t. They don’t have that kind of relationship. I do. They don’t understand that. They don’t even conceive of it. It’s not something that even crosses their path.

Podcasts are considered white-collar because it assumes that liberals dominate podcasts and so because of that podcasts are acceptable, you see. Even though I, ladies and gentlemen, am the first broadcaster to podcast my show. And you know why? Still do to this day. The podcast of every hour of this program is available el freebo every day. Well, to subscribers at RushLimbaugh.com. Over 200,000 paying subscribers. Your average leftist podcast will be lucky to have 25 to 50,000 at the top end. Would that be close to being accurate? Or there’s some a little higher than that? When he gets off the phone, ask him the question I just raised. It is a stark contrast.

So podcasts with an audience 25% the size of my podcast and not even comparable to the size of the radio talk show are considered much more intellectually preferable and powerful and interesting and what have you because the podcast world is where leftists who fail at talk radio go and tell themselves they matter when they don’t. It is stunning to watch. There are a couple exceptions. There are some really big podcasters, heroes. But in general it’s an overhyped medium that oftentimes does not have to validate its strength. 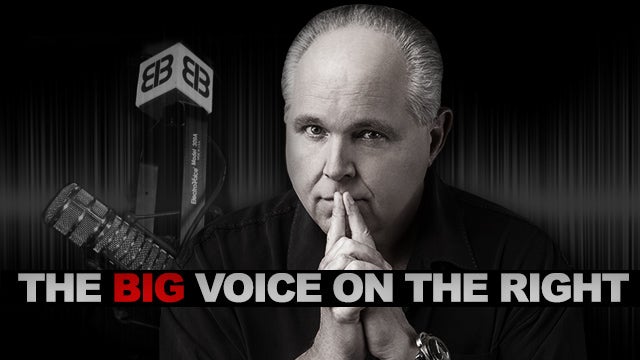 So podcasts with subscribers in the 20,000 range, they’re considered massively big hits. Now, what this is about, folks, this story, this is about conservatism. This is not about radio. It’s not about other media. The author gives it away when he whines at the beginning of his story that there’s only one liberal show in the top 15 talk shows, but he’s not worried that you don’t find a successful conservative podcast. Of course, he doesn’t know that mine is in the roster of successful podcasts.

That was the first criticism of this show, that you people are a bunch of mind-numbed robots. You’re incapable of thing for yourself. That you don’t know what to think, and you don’t know how to vote ’til I come along and tell you. And here this all is being recycled for I don’t know, what is this, the 25th time in 32 years.

Here’s the preeminent newspaper, said to be the greatest newspaper in the world, certainly in the country, and on the subject of talk radio it’s absolutely clueless. On the subject of me it’s absolutely clueless. The object lesson is if they are going to be this wrong and this clueless about an industry this crucial, ’cause he makes the point, without talk radio, there is no Trump. So you can tell they hate us. Yeah, the subhead, “the medium is at the heart of Trumpism.” Horrible. Absolutely horrible.

Trump doesn’t even believe that, by the way. Trump thinks that Fox News is at the heart of Trumpism. He doesn’t think talk radio’s at the heart of anything he’s doing. “You mean that even after Friday, Rush?” Damn straight, I’m telling you. Trump’s a TV guy. He hosted The Apprentice. Before that he did all kinds of TV shows. He’s not a radio guy. I think he learned a lot on Friday about the reach, the power, the size of the audience. But he’s a Fox News guy. You can tell. They disappoint him a lot so he talks about them. 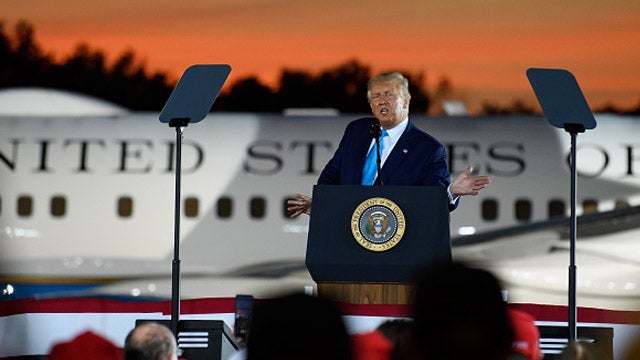 But I sit there and marvel. That New York Times Sunday magazine story was not all that long ago. Same news story that’s writing a story last Friday as though they never heard of me before. And, wow, this is dangerous. You know, wow, we gotta get a handle, we gotta keep an eye on this. This thing is at the heart of Trumpism and it’s a bunch of dumb people. They’re just a bunch of people being easily led down the primrose path. Bunch of people that hang around jewelry shops and cutting room floors and in the cabins of long-haul trucks. Can’t have that.

So there’s the requisite insult of the class and the style, the education the people that listen to talk radio. It’s something that’s never changed. And the guy admits that the journalists writing the stories about all of this never listen to it.