Blitzer vs. Pelosi! Why Dissent in the Ranks if Biden’s a Winner?

RUSH: Fireworks on CNN yesterday, Nancy Pelosi and Wolf Blitzer. Normally we wouldn’t spend much time on it. These are not normal times. It’s not often that the troops get into a knock-down-drag-out with the general. Pelosi is the general and the troops are Wolf Blitzer and the people in the Drive-Bys. They think Pelosi is blowing this on the COVID relief bill. 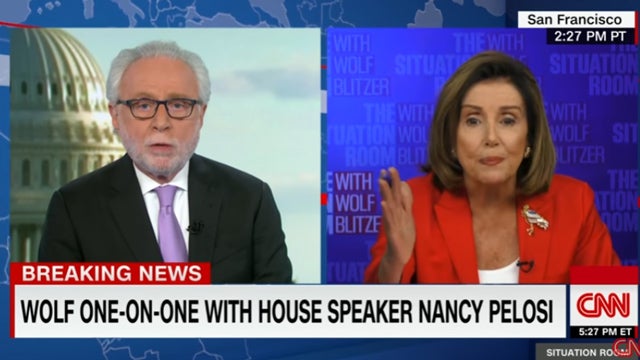 They think that Pelosi blowing it because Pelosi is making it look like the Democrats don’t care about people or… You know what Wolf just figured out? Wolf just figured out, he said, “Are you…? Are you actually not doing this ’cause (sputtering) you’re afraid that Trump is gonna get some credit for it?” And she blows up. There is dissension in the ranks.

Now, why would there be dissension in the ranks where — if you look at mainstream media today — Trump better… “You know what? He just better quit. He better announce that he’s getting out of the race today, quit. He doesn’t he have a chance. He doesn’t have a prayer. It’s over. He’s gonna go back to Mar-a-Lago and apologize for ever doing any of this. That’s how bad it is.”

I’m not exaggerating. I am not. They are portraying this as Joe Biden with a 99% chance of winning, 95% chance of winning. Nothing can change it. It is so over the top. As a result of that, I am getting panicked emails from people out the wazoo, and I need to… I need to talk to you people about this because this is feeding panic on itself, and it’s time to put it in perspective.

RUSH: Now, I still have some things to add to this, but I want to get started on the phones. Oh, by the way, the Treasury secretary, Steven Mnuchin… I like that name. I don’t know why, but I like the name “Mnuchin.” It just kind of… It kind of works. Anyway, Mnuchin just announced that he sees a little way of a stimulus bill on COVID-19 before the election. That’s what Pelosi wants, ’cause you know what happened? The market tanked.

Last I looked… Let’s see what the market is. It’s down 154 and probably a little bit more than that, maybe. I don’t know. But this is the objective. The objective is to tank the market, because that’s the equivalent of tanking the economy. Pelosi thinks that Trump measures economic strength by looking at the stock market. The Dow Jones Industrial Average.

If she can tank that, then she’s got a successful operation underway. Trump went to her in good faith. This always happens. I always caution against this. He went to Pelosi in good faith. He made an offer’ it’s still too high. She rejects it. I don’t know who she’s afraid of, because everything says, “Take the deal!” It was really not that great a deal. Everything says take it, and she didn’t. So somebody has her… I don’t know if it’s Alexandria Ocasio-Cortez and The Squad or who it is.

RUSH: Now Nancy Pelosi and Wolf Blitzed. CNN. We’re starting at the top here, audio sound bite number 1. This is The Situation Room. Wolf Blitzer. He is speaking to Pelosi. “Madam Speaker, even members of your own caucus want to accept this deal, $1.8 trillion.” It’s a lot of money. “Congressman Ro Khanna for example,” California, “a man you know well.

“I assume you admire him. He’s a Democrat. He said, ‘People in need can’t wait until February, $1.8 trillion is significant and more than twice the Obama stimulus. Make a deal, put the ball in McConnell court.’ So what do you say to Ro Khanna?”

PELOSI: What I say to you is, I don’t know why you’re always an apologist and many of your colleagues, apologists for the Republican position. Ro Khanna? That’s nice. That isn’t what we’re going to do and nobody’s waiting ’til February. I want this very much now because people need help now. But it’s no use giving them a false thing just because the president wants to put, uh, a check with his name on it in the mail.

RUSH: Holy smokes! Did you…? (summarized) “What I want to say to you is, ‘Why are you always an apologist?’ Wolf Blitzer, you’re always an apologist. Many of your colleagues are apologists for Republicans.” This woman doesn’t know what tough press coverage is. Can you believe this? He asks her in almost a sheepish manner.

He’s almost embarrassed to be asking her this. He knows that he’s engaging in insolent behavior. He knows he is disrespecting Nancy Pelosi, and he’s very worried about it. He’s taking a big risk. But he did it anyway, and she fires back. “I don’t know. You’re always an apologist. You and your colleagues. You’re always apologist for the Republican position.

BLITZER: — I’m not an apologist. I’m asking you serious questions, ’cause so many people —

“Madam Speaker…” Wolf Blitzer is trying to get control here.

“Thank God for Barack Obama.” She stepped in it there by saying “Obama,” and Blitzer tries to regain control. “I’m not an apologist. I’m asking you serious questions, ’cause so many people are hurting.” Pelosi: “I’m saying to you that if we…” Blitzer: “[A]nd they’re in desperate need right now.” She goes on to lecture Blitzer that she knows more about people suffering than all the rest of us do.

PELOSI: I don’t speak with (sputtering) the president.

PELOSI: I speak to his re… (sputtering) his representative.

PELOSI: What makes me amused if it weren’t so sad, is how you all think that you know more about the suffering of the American people than those of us who are elected by them to represent them at that table.

RUSH: This is amazing. She’s jealous! She’s jealous of Wolf Blitzer. “You don’t know anything about what I do. You don’t know about suffering. You haven’t the slightest idea about suffering! People don’t elect you. People elect me because they suffer. I’m the guy — I’m the woman — to talk about their suffering, not you.” Holy smokes! Is this woman insecure or what? That’s what you’re hearing here, folks. You are hearing rampant, rampant insecurity. Here is one more. This is the kicker before we have to go to break. 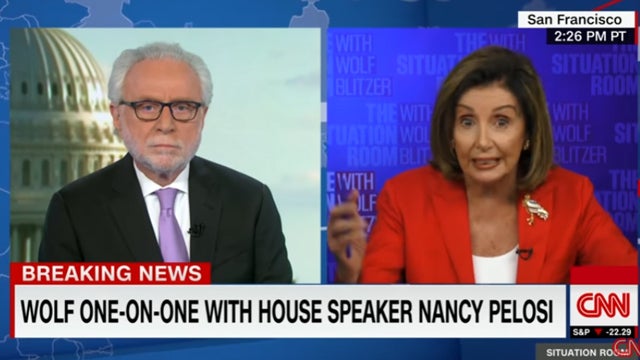 PELOSI: He’s not that important. But let me say this, with all due respect — and, you know, we’ve known each other a long time — you really don’t know what you’re talking about. So do a service to the issue and have some level of respect for the people who have worked on these issues. Have a little respect for the fact that we know something about these subjects. But again, you’ve been on a jag defending the administration all this time with no knowledge of the difference between our two bills. And I thank you for giving me the opportunity to say that to you in person.

BLITZER: All right. And we’ll leave it on that note. Thank you so much for —

PELOSI: Yeah. Well, we’ll leave it on a note that you are not right on this, Wolf, and I hate to say that to you.

BLITZER: All right. It’s not about me. It’s about millions of Americans. Thanks so much for joining us.

PELOSI: Thank you for your sensitivity to our constituents’ needs.

BLITZER: I am sensitive to them because I see them on the street begging for food, begging for money. Madam Speaker, thank you very much.

PELOSI: Have you fed them? We feed them!

RUSH: Holy smokes! “Have you fed ’em? We do! We feed ’em.” No, you don’t! What do you mean, you feed them? She’s saying, “We’re the ones who give them money, not you, Blitzer! You don’t give them anything. You don’t give ’em jack… We give ’em food. We give ’em money.” (interruption) I know! They won’t give ’em a toilet. They’re pooping all over San Francisco. You need a map to avoid the poop piles. Human!

Anyway, back to an earlier point. Does that sound like a woman who knows for certain she’s on the verge of a massive landslide presidential victory? She will not do this deal because she doesn’t want Donald Trump to get credit for it. Why does that matter? If they’re on the road here to a massive landslide win, then this deal wouldn’t be enough to change that direction.

But she can’t see it. She cannot… She’s not gonna do anything that will result in Donald Trump getting credit for a single thing regarding the relief of any human suffering. It doesn’t sound like a woman to me who thinks her party is on the verge of winning everything in Washington.