Good News on COVID-19 and ACB

RUSH: “For the second straight day, a bright light shines through the gloom of a darkening COVID outlook this fall.” That’s right. “Yesterday the good news was that fears of schools becoming mass incubators of coronavirus appear to be overblown. Positivity rates across a sample of tens of thousands of students and staff in NYC are minuscule.”

We told you this yesterday, that the percentage of infections was infinitesimally small — and once again, the panic mongers and the fearmongers were wrong. It is abundantly clear that we can have safe, in-class instruction this fall. Now, the news today “is even better.” Coronavirus cases are exploding in Europe, and they’re climbing “toward a new peak in the U.S.”

This is true. But “a tantalizing mystery has emerged,” and that is the death toll is not accompanying the new peak in reported cases. So the experts are out there running around scratching their heads, asking, “Why aren’t we seeing the same crushing death tolls in hot spots that we saw in the spring?

“Deaths are rising in Europe from their summer lows … but they’re nowhere near the gory levels of April even though both countries,” it’s the U.K. and France we’re talking about here, “are setting records in the number of daily cases.” The bottom line here is the fatality rates from COVID are dropping sharply everywhere.

And of course, the scientists are scratching their heads and trying to figure out why. It doesn’t make sense, especially with all of their model projections that were projecting mass deaths in a manner that we wouldn’t be able to tolerate. Oh, it was gonna be horrible!

And the deaths are just not happening commensurate with the reported number of cases, which is ultimately great news, considering what it could be. I think it just… We know so much more about the virus. We certainly know much more about how to treat it, how to deal with it — and this is, I think, abundantly clear. Folks, there’s reason for optimism. 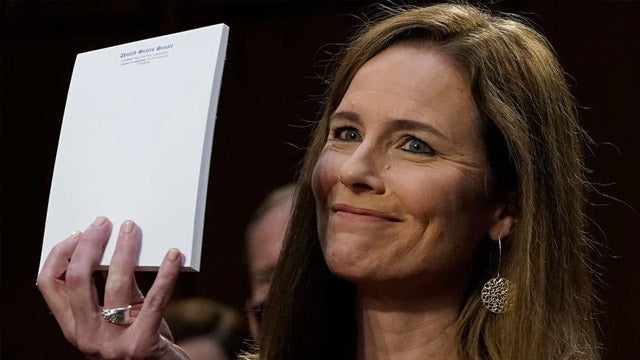 Maybe you don’t want to hear about optimism, but there’s reason for feeling upbeat out there today, more than you would be naturally inclined to — and if you don’t feel it yourself, try to feed off of me, because there are reasons to feel upbeat today. Mitch McConnell said yesterday that the Senate is going to vote Monday, October 26th, to confirm Amy Coney Barrett to the Supreme Court.

It’s going to happen. They’re going to make it happen. It is gonna happen. Chuck You Schumer tried to stop it, tried to force the Senate out of session in a midnight vote. Anyway, he had a long talk with Feinstein, Dianne Feinstein. There were some unrelated things in the conversation, but they’re not gonna be able to stop it, especially now.

Gallup shows 51% want Amy Coney Barrett on the court. Only 46% do not want her seated. So the public opinion is going against the Democrats on this nomination. Mitch McConnell confirmed it’s gonna happen.