If No Fraud Is Happening, Why Not Let the Trump Campaign Watch the Counting?

RUSH: Harmeet Dhillon is one of Trump’s legal advisers. She heads up a group called Women for Trump, Women Lawyers for Trump, Women Legal Beagles for Trump. I forget what the name of it is. But she’s out there. She’s good, she’s competent, and she’s a brawler.

Apparently, she posted a fake story that the Pennsylvania Supreme Court had overturned a lower court, the Commonwealth Court, and said that Trump’s counters could not go in, Trump’s observers could not go in. And the Pennsylvania Supreme Court says there’s not even a filing on their docket. They couldn’t have ruled on it yet. So, it’s more fake news. 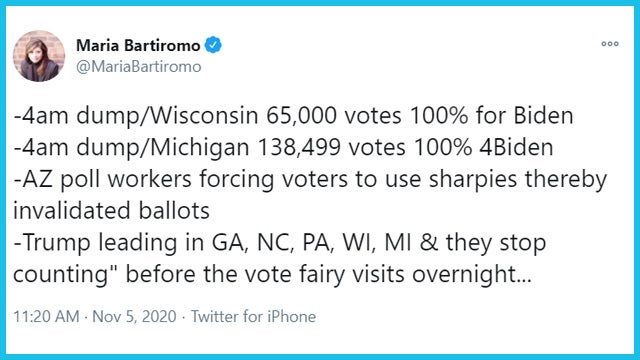 There’s just so much crap going on out there. (sigh) Just do your best to keep up with it and keep people abreast. Here’s Maria Bartiromo. This is my point. Maria Bartiromo tweeted about an hour ago, maybe less than that: “-4am dump/Wisconsin 65,000 votes 100% for Biden -4am dump/Michigan 138,499 votes 100% 4Biden.” Now, there’s some dispute about these ballots.

You probably… Well, you may not have heard. You could be one of the people who have heard that somehow this is a typo, that it’s not as bad as it originally was reported. I’ve been trying to track that down. The fact of the matter is that there are still 138,000 questionable ballots out there. But the point is that 100% of these ballots that are being found are all for Biden.

Now, ask yourself this: What is the downside for the Democrats in cheating? Has anybody noticed any penalty? Have the Democrats suffered because they’re cheating or trying to? Have they been caught, and have they been threatened legally? Are any of them being told to stop cheating by authorities? Has the Department of Justice weighed in on any of this?

The fact is, there’s no downside. As far as they’re concerned, why shouldn’t they cheat? Why shouldn’t they do whatever it takes to win? “We’re not gonna let Bad Orange Man interrupt the gravy train coming out of Washington, D.C. We’re not gonna let this guy make America great again if it means eliminating all the perks that we get as members of the Washington deep state!

“We’re just not gonna let this guy ruin it for us. We’re gonna do whatever it takes — and if the Republicans want to join us, then they’re more than welcome to.” Hello, Michael Steele and his so-called Lincoln Project and the rest of these Never Trumpers. “We’re not gonna let Trump make America great again; I don’t care what it cost us. I don’t care what it takes — and if we get caught cheating, so be it, ’cause nothing ever happens to us anyway.” 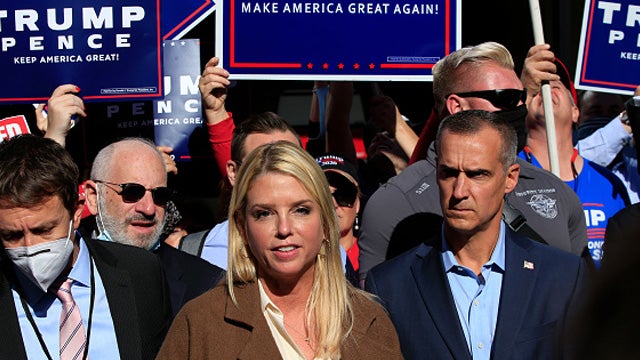 So if you look at it from their standpoint, what is the downside? I mean, dead people have been voting in Chicago and West Virginia for who knows how long. It was 1960 when I first heard about it — I was 9 years old then — and it hasn’t changed. Dead people still vote. We joke about it. We joke about it and we laugh about it.

In Arizona, “poll workers forcing voters to use Sharpies.” You know what that does? It invalidates the ballot. You gotta use a ballpoint pen on most ballots. You don’t use a Sharpie. Anybody and everybody knows that. So in Arizona, there were “poll workers forcing voters to use Sharpies thereby invalidated” their votes. “Trump leading in GA, NC, PA, WI, MI & they stop counting before the vote fairy visits overnight.”

Okay. So why are the Democrats in Philadelphia fighting it? I mean, if there’s no cheating going on, if everything’s aboveboard and if Trump’s gonna lose and he’s gonna lose legitimately and you just better get your arms around it, why not let the Republicans in and let them see Trump losing legitimately? Why are they afraid of this?

You know it’s the Biden campaign and Biden that are telling these people in the polling places to keep the Republican Trump people out. Well, I don’t know that — Biden may not even know what’s going on at the moment, but his people. The Biden campaign, Bob Bauer is running this show. He’s the guy from the Perkins Coie law firm. They paid Christopher Steele, the guy that wrote the Steele dossier that was that was the foundation and the centerpiece of the so-called Trump colluding with Russia scandal, Bob Bauer runs that law firm, he’s running all of this for the Biden campaign. 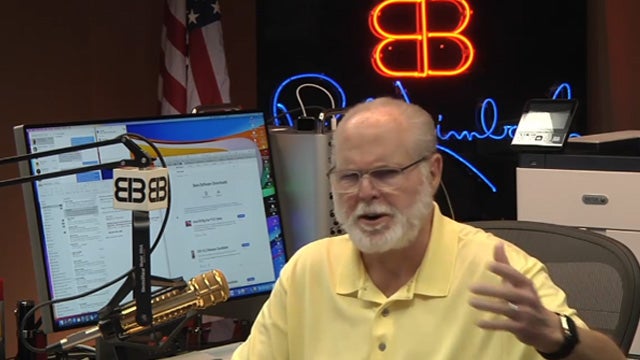 You may have seen him on TV. His wife’s name is Anita Dunn. Anita Dunn was big in the Obama administration. She was on television one day praising the military acumen and skills of Mao Tse-tung, or Mao Zedong, depending on how you choose to pronounce it. He’s a mass murderer, and there she is on TV praising his strategic skills. Anyway, I keep reminding myself because my mind knows so much about these things.

If they’ve got nothing to hide, why defy state law and prevent Trump election observers in there to watch? I mean, they’re clearly fighting this, the Democrats are in Philadelphia. Why? If they’re so confident Trump’s gonna lose this, why not let Trump’s election people in there and witness the defeat? Yeah, how humiliating would that be? But they don’t want anybody watching what’s happening here.