America First as a philosophy will survive.

RUSH: This is Scott, Fort Worth, Texas. I’m glad you waited, sir. Hi. 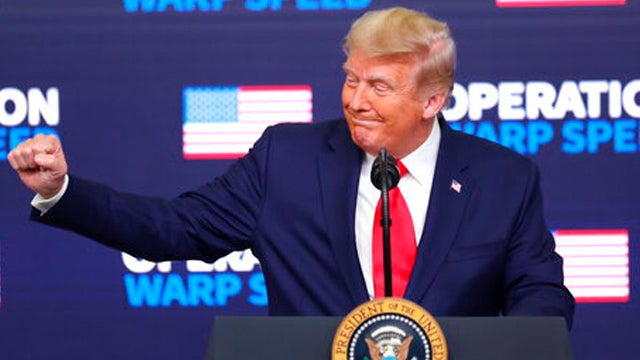 CALLER: Rush, thanks for taking my call and everything you do for the American people. My question or comment to you is, shouldn’t we be calling this the Trump vaccine? And shouldn’t we have a message out there that says Trump vaccine conquers or combats China virus before Biden starts taking credit for it?

I mean, this is what the media is setting up. And there’s no question. You’re right about this. It’s an objective that that they all have, particularly if it works, and if it works, they’re going to be doing everything they can to make people think that this vaccine only happened because of Joe Biden, when Joe Biden had nothing — I mean, zero, zilch, nada — nothing to do with it.

RUSH: I want to JIP Trump. Let me set this up. Trump is not getting credit for this vaccine, and it bums me. He’s a addressing Operation Warp Speed, the vaccine summit. He’s talking about this now, delivering remarks on Operation Warp Speed. I want the guy to get the credit that he deserves. Let’s JIP this now because our microphones are there.

THE PRESIDENT: … the scientists and the might of American industry to save millions and millions of lives all over the world. We’re just days away from authorization from the FDA, and we’re pushing ’em hard, at which point we will immediately begin mass distribution. Before Operation Warp Speed, the typical time speed for development and approval, as you know, could be infinity, and we were very, very happy that we were able to get things done at a level that nobody has ever seen before. The gold standard vaccine has been done in less than nine months. On behalf of the entire nation, I want to thank everyone here today who has been involved in this extraordinary American initiative. I also want to recognize members of my administration who have worked tirelessly in this effort. Alex Azar, please, Alex. Where’s Alex? Thank you, Alex. Great job.

THE PRESIDENT: Moncef Slaoui, where are you, Moncef? Thank you very much.

RUSH: All right. Way to go out there. All these people did it. 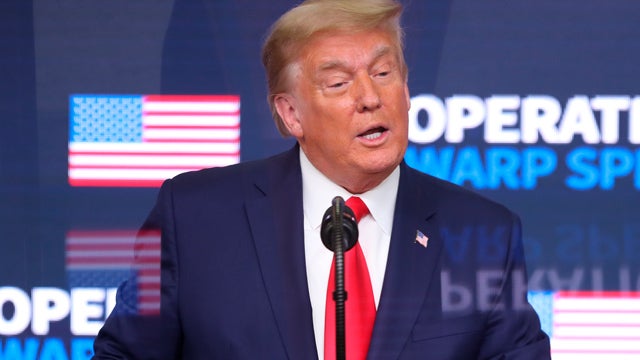 THE PRESIDENT: A man who’s now gonna be very important, General Gus Perna. Have no doubt about it.

RUSH: Jared, way to get it done here before getting out of Dodge. Absolutely right.

RUSH: Robert Redfield with the weird beard at the CDC.

RUSH: Right on, right on.

THE PRESIDENT: — and many others, also, many, many others. We’re also grateful to be joined by governors Greg Abbott. Where is Greg?

THE PRESIDENT: Thank you very much. Great job, Ron.

THE PRESIDENT: Thank you, John, thank you very much. Senator Steve Daines, congratulations on a great win. Great win. That was easier than you thought. It turned out, right?

RUSH: Totally shutting Biden out of any credit for this.

THE PRESIDENT: Congressman Greg Walden. Thank you very much.

THE PRESIDENT: And Congressman Brad Wenstrup. Thank you, Brad. Great job. And many, many others. My administration provided a total of $14 billion to accelerate vaccine development and to manufacture all of the top candidates in advance, long in advance. As a result of this unprecedented investment, we are exceedingly proud that both Pfizer and Moderna have announced that their vaccines are approximately 95% effective, which is a number that nobody expected to be able to get to, far exceeding anything that really anybody thought.

We went out and we said, “What do you think a maximum would be?” And I think doctors, we all came up to the conclusion that something like that would be really incredible. We have other candidates looking right now. We have some big ones that we’re gonna be announce real soon. We have some companies, great, great companies out there you all know about, Johnson & Johnson and others. And they’re all coming in, and they’re coming in very quickly. We expect to have some news on that very shortly.

And we have worked very well with the companies, but if for any reason we have any problems we will be instituting the Defense Production Act, and we will make sure that we don’t have any problems for very long. We’ve instituted it before. Two additional companies, AstraZeneca and Johnson & Johnson. As you know, the Johnson & Johnsons one dose, one shot vaccine so we’re gonna see how that works. That would be very helpful in that all came out and I think it probably will. Also they’re showing tremendous, tremendous promise, all of them —

RUSH: All right, that’s pretty much — grab audio sound bite number 29 again. I just wanted to get this on record as the Trump vaccine. They’re trying to call this the Biden vaccine. They’re gonna keep trying to call it the Biden vaccine. I wanted you to hear this. I didn’t know he was gonna be, but I’m glad he recognized all of those people who had a role in making this vaccine come to market. This is unprecedented. There’s never been a vaccine hit market in less than a year like this. This really is unprecedented. Did you hear Trump thank Dr. Fauci? He didn’t thank Dr. Fauci. I’m not surprised. You surprised by that?