I’ve Had a Year to Think About What’s Important

RUSH: And greetings to you, music lovers, thrill-seekers, conversationalists all across the fruited plain. It is great to have you here today. Great to be with you. Rush Limbaugh, the EIB Network, and the Limbaugh Institute for Advanced Studies of All Things That Matter. Telephone number, 800-282-2882 if you want to be on the program. We’re gonna do a version of Open Line Friday today, Mr. Snerdley. 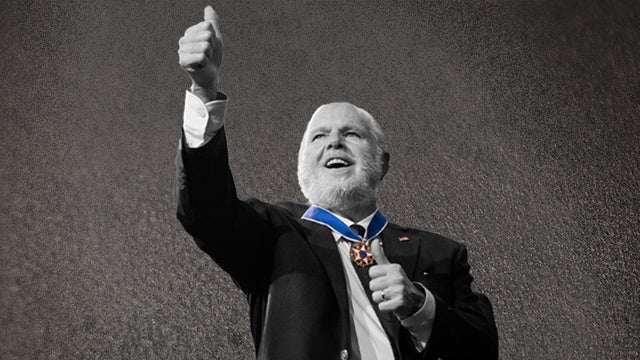 I want to go back… Normally, by the way, I wait until the third hour of the program. I’ve always said that I usually use the Christmas program such as this one to engage in my thank-yous and my thankfulness for the year, rather than at Thanksgiving, and I don’t know why. There’s something about Christmas, my childhood memories of it, the families getting together and the children making it what it was.

My feelings of thankfulness always surface. My feelings of great gratitude always surface at the Christmas time of year, and it’s no different this year. Now, in January of this year, toward the end of the month, I received a — you all know, but there’s something I want to say about it — stage 4, advanced lung cancer, terminal diagnosis. The objective of everybody involved was to extend life for as long as possible as enjoyably as possible.

Well, back in late January when I received this diagnosis — and I was shocked. I was stunned, and I was in denial for about a week. I mean, I’m Rush Limbaugh. I’m Mister Big of the Vast Right-Wing Conspiracy. I mean, I’m indestructible. I said, “This can’t be right,” but it was. What I didn’t know at the time that I learned later in the course of the year was that I wasn’t expected to be alive today.

I have been blessed. I mentioned to all of you back in the early days, some time… I guess, this might have been in February. It was around, I think, either during or shortly after I had received the Presidential Medal of Freedom at this year’s State of the Union address by President Trump in the House Chamber.

By the way, something I really hope that President Trump does. He had a marvelous speech last night — a four-minute speech on the COVID relief debacle coming out of the Congress — that should be studied in a master’s course in communication. It was clear, it was concise, it was well paced, it was powerful, it was on brand, and it was classic.

It was the kind of speech only an outsider could have made, and I really hoped that Trump would sit down and start ripping up the bill as Pelosi ripped up his speech. You know when she began to rip up his speech is when he began the presentation of the medal to me, seated next to his wife, the first lady Melania. And I turned my back to her, which is proper.

She was the one who actually put the medal around my neck, and I thought it would have been great if Trump had ripped up that bill. But he didn’t. And that’s understandable as well. But I remember saying to all of you at that time that I had a little bit of understanding of something that had perplexed me for a lot of my life, and that was Lou Gehrig.

Lou Gehrig, the Iron Horse, New York Yankees, set the record for consecutive games played until Cal Ripken came along decades later and broke it. And on the day that Lou Gehrig announced that he had his disease that was forcing him to retire from Major League Baseball, he said to the sold-out Yankee Stadium, “Today I feel like the luckiest man on the face of the earth.”

I didn’t understand that. I mean, here’s a guy who’d just been diagnosed with the most terminal of terminal diseases, and I said, “This can’t be real. He can’t really think he’s the luckiest guy in the world. This is just something that he’s saying because it will play well.” I don’t mean to be insulting Lou Gehrig; don’t misunderstand. I’m just saying, how in the world if you’re being honest can you feel like you’re the luckiest man on the face of the earth? 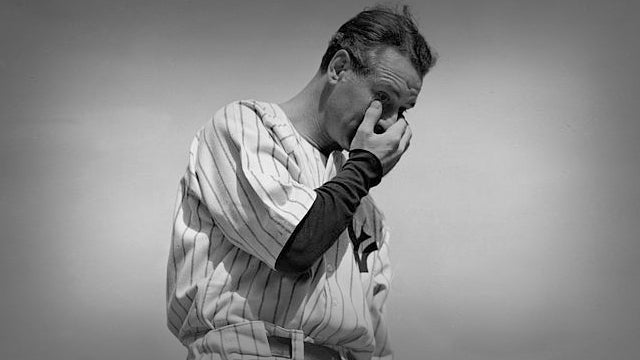 Well, when I got my diagnosis and when I began to receive all of the outpouring of love and affection from everywhere in my life from so many of you in so many ways and from my family — who, man, they have supported me my entire career. Even during times it would have been understandable and easy for them to say, “Rush who? We don’t know this guy.”

But that never happened. I mean, I’ve been totally supported by virtually everybody in my family. I’ve been propped up. I have been defended. I’ve been made to look better than I am. My lovely wife, Kathryn, has done so much in that regard. She has done so much with RushLimbaugh.com and with the charitable efforts that we have engaged in.

And all of it has been to my benefit — and yours. It’s for the benefit of people who are the recipients of our efforts. So many people have put me first in all of this, and I understand now what Lou Gehrig meant, ’cause I certainly feel like that. I feel extremely fortunate and lucky.

And because I have outlived the diagnosis, I’ve been able to receive and hear and process some of the most wonderful, nice things about me that I might not have ever heard had I not gotten sick. Again think, how many people who pass away never hear the eulogies, never hear the thank-yous? I’ve been very lucky, folks, in I can’t tell you how many ways. 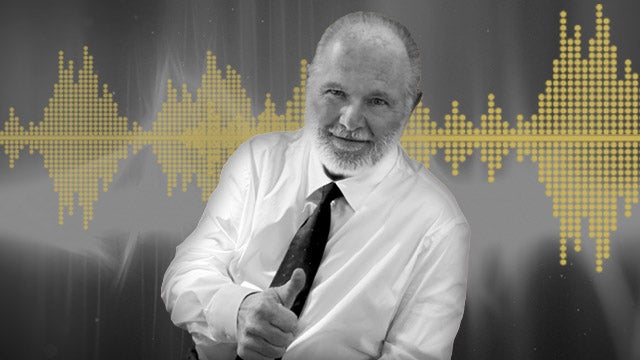 You, I — When this kind of thing befalls you, it’s hard not to become self-focused. It’s hard to not just think of yourself, and it’s hard to think that everybody’s gonna drop what they’re doing and deal with me, with you. You have to guard against that because, to the family, this is as disrupting, it’s as upsetting as it is to me and in some cases even more so.

So you can’t — I can’t — be self-absorbed about it when that is the tendency when you are told that you’ve gotta due date, you have an expiration date. A lot of people never get told that, and so they don’t face life this way. This is not a complaint. I’m simply… This is why I say, there’s so much I want to say today and so much I want to say well, so much I want to say exactly as I’m feeling it, because my point in all of this today is gratitude.

My point in everything today that I’m sharing with you about this is to say thanks and to tell everybody involved how much I love you from the bottom of a sizable and growing and still beating heart, and there’s room for much more. All because I have learned what love really is during this. You know, I have a philosophy there’s good that happens in everything.

It may not reveal itself immediately, and even in the most dire circumstances, if you just wait, if you just remain open to things, the good in it will reveal itself. And that has happened to me as well in countless, countless ways. You know, I mentioned Kathryn. Don’t misunderstand. She’s done much more than just redesign a website and shepherd the RushLimbaugh.com Store.

It’s not embarrassing. It’s just gratifying, and it has helped me to see so much so clearly about the goodness of people and their decency. And it’s confirmed so much of my instinctive beliefs about people. For example, the alleged president-elect, Joe Biden, holiday message: “Our darkest days are ahead of us.” Well, for some of us that’s absolutely true.

But, folks, I have to tell you, if I were president-elect of the country, it’s the last thing I would say. Even if I believed it, I doubt that I would put it this way. But I don’t believe this anyway. Our darkest days are ahead of us? What a bleak way of looking at things. This is during a press briefing yesterday. He said, “The worst is yet to come in the fight against the coronavirus pandemic,” which is weird, given that Biden has repeatedly claimed that it’s Trump who’s killing Americans with COVID. 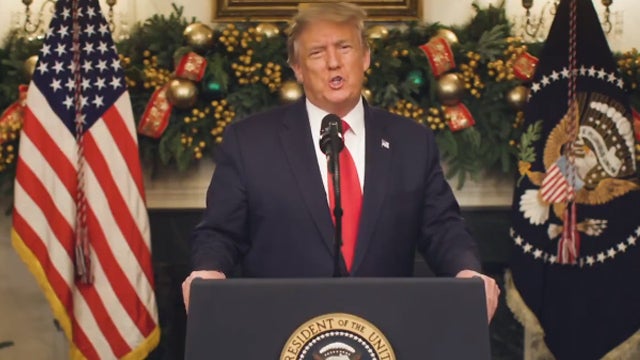 Trump’s gonna be gone soon, so why are our darkest days ahead of us when Trump is leaving? If Trump’s responsible for all of this? But my point is, yeah, the virus is what it is, but we adapt. I talked about this yesterday. We Americans have adapted to our problems. We’ve adapted to changing evolutionary things in our lives, in our country because of our freedom.

Now, it’s under assault and under attack and we all know this. But I don’t believe our darkest days are ahead of us. I never have. People have been asking, “You’ve always told us you’d tell us when it’s time to panic. Is it time?” It’s never time to panic, folks. It’s never, ever gonna be time to give up on our country. It will never be time to give up on the United States.

It will never be time to give up on yourself. Trust me.

So we’re gonna do a real program today, and in the in the process of the real program I’m going to be sharing the thoughts that I want to share with you today. I’m gonna just do it at random whenever it hits me, whenever I feel it. I gotta take a break right now. I’m a little long here. We’ll be back. We will continue. Thank you so much for being with us today, and thank you for being part of this audience for 30 years, 32 years.

Whatever it is, it’s just mind-boggling.