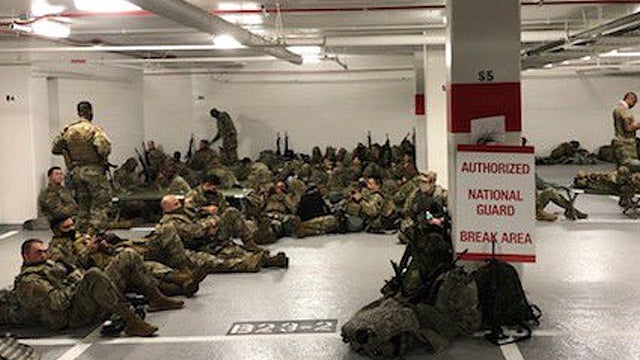 The Democrats, when they no longer needed the National Guard, sent them to a parking garage. There were no beds. There was just a parking garage. There were oil slicks in there under the places where people would park their cars. That’s where they were sent, after they had done their duty of being the photo op. Yeah, we need the Guard here because you never know what kind of plans the Trump people might have!

They “have been photographed having to sleep in parking garages while temperatures .. were set to dip down to” near 32 degrees. Yes, these are unheated parking garages. The pictures of these guys and women sleeping on their backs in their uniforms trying to find something soft to lay on. It is outrageous, and yet that’s where the Democrats positioned them. 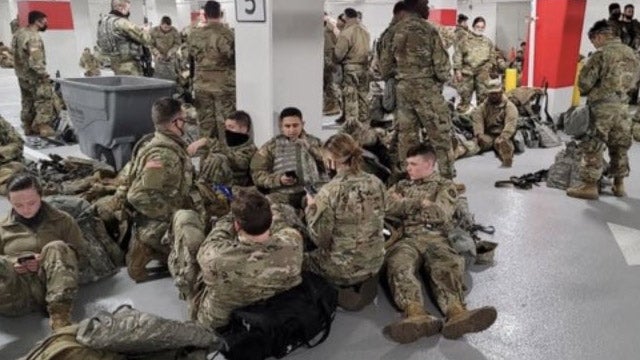 “The photos of the living conditions that the National Guardsmen were forced to endure come after Democrats took complete control of the federal government this week following Joe Biden being sworn…” The governor of Florida, Ron DeSantis, heard about this, saw this, saw the pictures, and said to get them the hell out of there.

The Florida contingent is being withdrawn. Do you realize these National Guardsmen have been told, “It’s gonna take four or five days before we can come up with a plan to get you out of there, to get you back home”? They’re gonna be kept in Washington even though there’s nothing left for them to do. Except! Except! Remember, their presence in uniform is intended, I believe, to send a message.

“‘All National Guard troops were told to vacate the Capitol and nearby congressional buildings on Thursday, and to set up mobile command centers outside or in nearby hotels… ‘They were told to take their rest breaks during their 12-hour shifts outside and in parking garages…’ ‘Speaker Pelosi personally met with the Secretary of the Army to demand 14,000 National Guard troops be deployed to the Capitol…’

“‘But there was no logistical plan provided by the Speaker’s office on where the service members would sleep,'” on where they would get their meals. There were no logistics whatsoever. Just get here. Just get your uniformed selves here and take up position where we tell you during the inauguration ceremony. Here’s a tweet from a “military source in D.C.:

MILITARY SOURCE IN DC:
“For the last week my battalion has been sleeping on the floor in the Senate cafeteria. Today the Senate kicked us out & moved us to a cold parking garage.
5000 soldiers.
1 power outlet.
One bathroom.
This is how Joe Biden’s America treats solders.”

“For the last week my battalion has been sleeping on the floor in the Senate cafeteria. Today the Senate kicked us out & moved us to a cold parking garage. 5000 soldiers. 1 power outlet. One bathroom. This is how Joe Biden’s America treats solders.” Here’s the story on DeSantis bringing Florida’s National Guard back home:

“Last night, I ordered our Adjutant General to bring Florida National Guard soldiers home from the National Capital Region.” The same thing happened in Texas with Governor Abbott there. I mean, sleeping in a parking garage, folks. Being told — with no logistical plan — to get over to the parking lot; that’s where you’re gonna sleep.

So the idea here that there’s some kind of insecurity on the part of the Democrats and that they’re a little fragile when it comes to their insecurity? I don’t know. I think the National Guard served its purpose and then, when that was done, there wasn’t a plan. So they were stuck there for three or four years three or four, maybe five more days.

RUSH: We have a little update on the National Guard. It turns out that the National Guard were forced by Capitol Police to evacuate the Capitol building grounds because representative Will Keating, who’s a Democrat, Massachusetts, complained about one National Guard member, one, not wearing a mask at a nearby Dunkin Donuts.

RUSH: CNN’s Newsroom today. The infobabe babe Poppy Harlow talking to the Pentagon correspondent Barbara Starr. “National Guard troops forced to rest in a parking garage have now been allowed back inside the U.S. Capitol complex. I mean, this a really bad optics out there, Barbara. Why did it even happen in the first place?”

STARR: You know, you have to ask where the lack of common sense was in all of this. The political optics, absolutely terrible for Congress. It’s cold. The fumes from automobiles having parked in there. The oil slicks on the floor. The lack of bathroom facilities. You know, you could go on and on. This quickly became, you know, within minutes a political scandal for Congress. 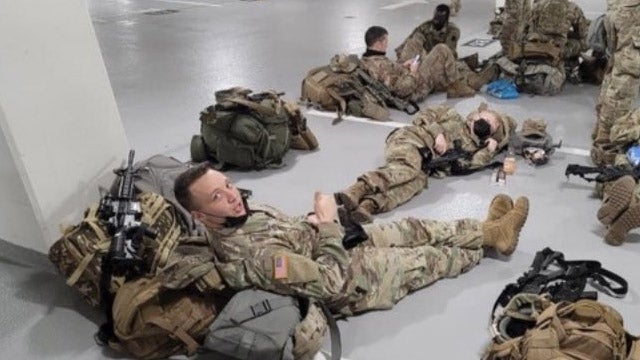 RUSH: Really? Can I tell you what just happened there? A political scandal for Congress. See, Congress does not have a single face, but Biden is. Biden is a single face. Biden is president. And so the political optics, terrible for 435 people. But not for Biden. So, you see, very easy to throw this off as something Congress screwed up. They’re already lower than the media in polls of people respecting various professions. Congress routinely polls near the bottom public respect. So this is no big deal. Oh, yeah. The optics, absolutely terrible for Congress.

Why aren’t they bad for Biden? Biden’s the guy who was being protected by these National Guard people. Biden is the guy in the razor wire. Biden is the guy who was the focus of the National Guard’s presence, not Congress. Congress wasn’t there. Nobody was there. There weren’t any Americans there. And yet somehow this is bad optics for Congress. See how that works? How in the world is it gonna be bad optics for 435 people?

RUSH: Oh-ho. Oh. (laughing) Oh, look at this. Jill Biden is out meeting with the National Guard that were made to sleep in the parking garage. Jill Biden’s out there. She’s wearing a mask. She wearing black… It’s like a robe. It looks look like she’s got white Santa Claus boots on and is posing for a photo with National Guard troops ’cause, you know, when the first lady wants a photo, you gotta do it. 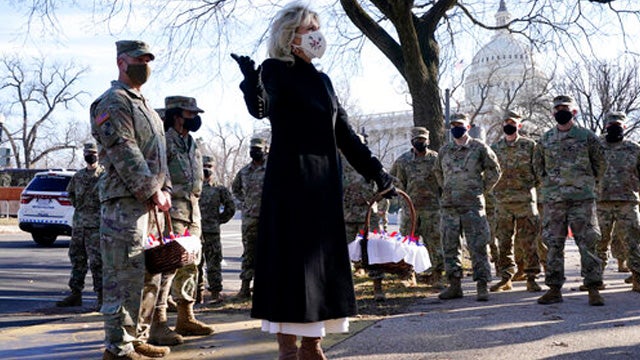 So she’s gonna… They’re trying to mend fences. They’re trying to fix what they broke. They’re trying to go out there and make it look like Congress screwed up by telling the Guard to split the scene, to sleep in a parking garage, so that it doesn’t bleed over and hurt Biden. Smart move. Can’t blame ’em. The media is gonna help her pull that off.