Pointing Out the Hypocrisy of the Infallible Dr. Fauci

RUSH: Now, here’s Dr. Fauci. Fauci’s out there saying (summarized), “Oh, man, it’s so great being here now. It’s so great. It’s like I’ve been liberated. I don’t have to worry about somebody not liking what I’ve said.” We have a couple of sound bites of Dr. Fauci.

RUSH ARCHIVE: I guarantee you if Biden’s elected president Fauci’s gonna be running COVID-19 policy… If these people get the power to do that, you can kiss your economic recovery goodbye, and everything associated with it. … It’s scary what these people are planning to do. And this is just independent of COVID-19. If they implement their other economic policies, such as the Green New Deal, in conjunction with whatever drastic plans they have for COVID-19, oh, I just shudder to think what these people are gonna do to this country.

RUSH: And they’re off and running, are they not? They’ve killed 11,000 jobs from Keystone XL pipeline, 8,000 of them union jobs, $1.6 billion in salary. They just cut it, and they say they’re gonna replace it with their environmental policies. Green New Deal. That’s a crock. 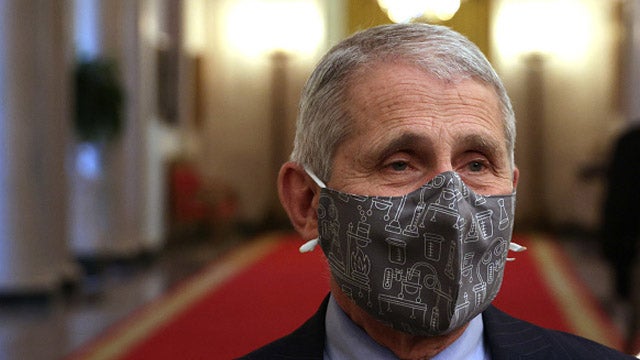 The Green New Deal is gonna cost so many jobs. If they actually ever do that, if the Green New Deal gets anywhere near reality, you are not gonna recognize your country. So that was October 29th. Here is Dr. Fauci. Last night at the White House during a press briefing, Dr. Fauci spoke and said this about the pandemic.

FAUCI: When you look more recently at the seven-day average of cases — remember, we were going between three and 400,000 and two and 300,000 — right now, it looks like it might actually be plateauing in the sense of turning around!

RUSH: Here is Dr. Fauci. (impression) “Why, we are plateauing!” Why, this is the second day after Biden’s inauguration, and the COVID-19 virus may have peaked. It’s like the virus knew that Biden was gonna get elected, like the virus is afraid of Biden. This was eminently predictable, and it was predicted by me and a bunch of others, along with other predictions.

Here’s Fauci again last night at a press briefing at the White House. He took questions. A reporter said, “Dr. Fauci, you’ve joked a couple of times today about the difference that you feel in being the spokesperson for this issue in this administration,” the wonderful and great Biden administration, “versus the previous one.” You know, the one with Trump. 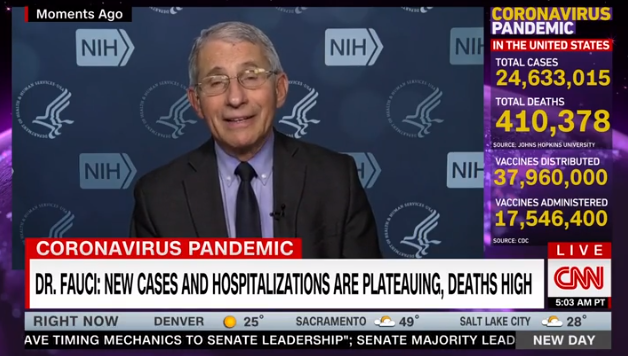 FAUCI: I can tell you I — I take no pleasure at all in being in a situation of contradicting the president.

FAUCI: So it’s really something —

FAUCI: — that you didn’t feel that you could actually say something —

FAUCI: — and there wouldn’t be any repercussions about it. The idea that you can get up here and talk about what you know — what the evidence, what the science is and know that’s it; let the science speak — it is somewhat of a liberating feeling.

This is Fauci, who essentially is saying, you can’t challenge me. You can’t question me. I am science. And the way the Democrats have established science, science is irrefutable. Science, you can’t question it, science, you can’t challenge it. Science is their Supreme Court. It’s the final word. And Fauci is here acknowledging that he’s happy that he is now the final word. “I can tell you I take no pleasure at all in being in a situation of contradicting -” what do you mean he takes no pleasure? He probably can barely contain himself.

Now, Fauci is on every channel all the time. One of my tech blogs, Fauci is referenced every third or fourth story, as though he’s God. Whatever Fauci says, this tech blog reports it as though it is biblical. You don’t challenge Fauci. You don’t question Fauci. So this morning Fauci’s on CNN. John Berman said to him, “Dr. Fauci, did the lack of candor in the previous regime, did the lack of facts, in some cases, over the last year cost lives?” 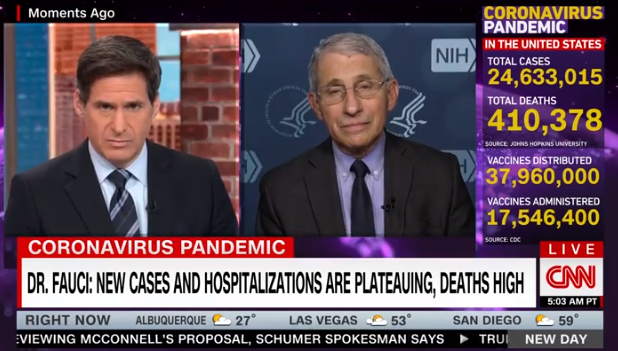 FAUCI: It very likely did. You know, I don’t want that to be a sound bite, but I think if you just look at that —

FAUCI: It very likely did. You know, I don’t want that to be a sound bite, but I think if you just look at that, you could see that when you’re starting to go down paths that are not based on any science at all — and we’ve been there before. I don’t want to rehash it — that is not helpful at all.

RUSH: All right. So here we are again starting to go down paths that are not based on any science. So here we have let’s just ramrod Trump again. He’s nothing but a buffoon, he doesn’t know science, he doesn’t know anything, he made me lie to the American people, which cost lives, and I feel liberated now to be out from under all this.

Well, let’s go to back, shall we? Here is Dr. Fauci January 21st, 2020, a year ago. He’s on Newsmax TV’s Greg Kelly Reports. Greg Kelly’s question to Dr. Fauci, “Bottom line, we don’t have to worry about this coronavirus, right?” 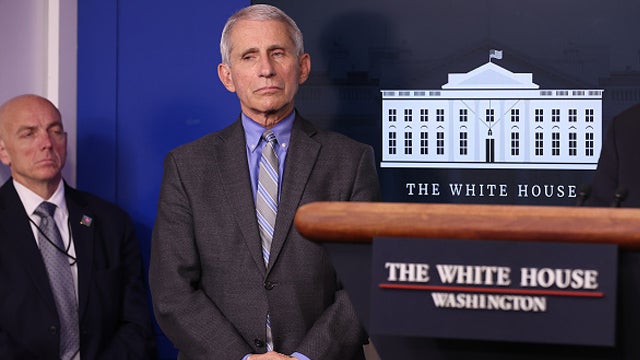 RUSH: Do you realize when this was? This is one year ago, folks, 2020, 2021, the years run together. This is January 21, almost exactly one year ago, and Dr. Fauci said — and he’s got science on his side, he’s now infallible. Dr. Fauci: This is not a major threat for the people of the United States. This is not something the citizens of the United States right now should be worried about. Nah. You gotta take it seriously, but it isn’t of any concern.

So you’re the American, you’re being told that this guy knows more than anybody else about this, and this guy’s telling you, you don’t have a thing to worry about. You want to talk about costing lives? Donald Trump never told anybody don’t worry about it like Dr. Fauci did. Dr. Fauci, with the imprimatur of expertise, is saying to people, you don’t have a thing to worry about, one year ago. And let’s jump forward to March, March the 8th 2020 on 60 Minutes, the chief medical correspondent, Dr. Jon Lapook interviewed Dr. Fauci, asked him, “There’s a lot of confusion around people and misinformation surrounding face masks. Can you discuss that, Dr. Fauci?”

FAUCI: The masks are important for someone who’s infected to prevent them from infecting someone else. Right now in the United States, people should not be walking around with masks.

LAPOOK: You’re sure of it? ‘Cause people are listening really closely to this. 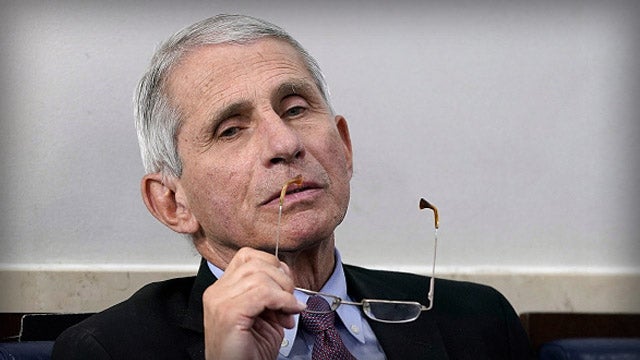 FAUCI: There’s no reason to be walking around with a mask. When you’re in the middle of an outbreak, wearing a mask might make people feel a little bit better, and it might even block a droplet. But it’s not providing the perfect protection that people think that it is. And often there are unintended consequences. People keep fiddling with the mask and they keep touching their face.

RUSH: Wow. So back in March of 2020 you don’t need to be wearing a mask. You really don’t need to, there’s no reason to be walking around with a mask on. When you’re in the middle of an outbreak, wearing the mask might make you feel better, might even drop a droplet, but it’s not providing the protection people think it is. Now where are we? We have a mandated national mask policy if you’re on federal property, except if you’re Biden you don’t have to wear the mask when you’re celebrating at the Lincoln Memorial, but everybody else has to have it.

But back in March in infallible Dr. Fauci, nah, you don’t need to wear it. It’s just giving you a false sense of security. Now, my friends, I want you to know I am on the outside guardrails of protection here because criticizing Dr. Fauci is close to criticizing Biden. You’re not supposed to do that. I’ve gotten very, very close to this by pointing out this hypocrisy. So I better stop and rein it in, go to an immediate profit break.