If Anyone Has Earned an Honorary Degree from the Limbaugh Institute, It’s Governor Ron DeSantis

TODD: It is an honor to be on EIB. Mark Steyn said it well. When we’re guest hosting, we’re always sitting in for Rush Limbaugh. it’s 800-282-2882 if you want to join us on today, the day the Lord has made for all of us. I choose to be grateful, and it is a week — it’s going to be a week — since we lost Rush. Sometimes like you, I’ll still tune into the show and I remind myself. 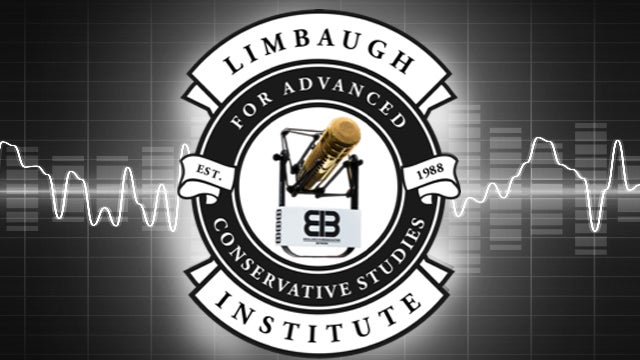 We’ve been without the Maha who has gone on to heaven. You’ve heard Kathryn, his beloved wife, address the audience and take phone calls and that was an historic day. And there’s an historic radio show and radio network that exists because people who love Rush built it with him, and that includes you. You can call in at 800-282-2882. (laughing) So wouldn’t you know this?

Rush has moved on to heaven, and still liberals and statists are just beside themselves. In the state of Florida, Ron DeSantis — he’s the governor, the boss — ordered that the flags be flown at half-staff in Rush’s adopted home state of Florida. (laughing) So the Democrats’ response to this is sort of a nonviolent insurrection, you might call it. The Democrat agricultural commissioner of Florida, Nikki Fried, refused.

She refused to take the order for whom she works. She refused to fly the flag at half-staff, and this all was discussed yesterday morning on CNN, which used to be a news network. There’s a co-host there, John Berman, who spoke with this nonviolent insurrectionist — the Florida Department of Agriculture and Consumer Services head, Nikki Fried — about her decision to defy the governor’s order to lower the flags to half-staff, and they had this exchange.

BERMAN: Why do you refuse to lower the flags to the buildings that you control?

TODD: Fire her. Have done with her. This is a person who quite clearly has not listened to Rush’s program even for five minutes. You know, Rush has said for those of you who recognize it that there’s no graduate degrees from the Limbaugh Institute for Advanced Conservative Studies, all right? He most recently added the Anti-Media Studies wing. But DeSantis, the governor who gave this order and this woman has refused this order was definitely on the Institute’s honor roll. He said this:

RUSH: I want to start with a graduate, or the closest that we’ve ever had to a graduate, of the EIB Limbaugh Institute, and that would be Florida Governor Ron DeSantis. As you know, there are no graduates from the Limbaugh Institute because the learning never stops. We don’t issue degrees here because there never is a time where we have proclaimed that our students have learned it all. Because our curriculum is constantly expanding. There is no set curriculum here.

But Governor DeSantis has asked in the past for an honorary degree, and Governor DeSantis has said that if said honorary degree were ever bestowed, that he would frame it, hang it proudly on the wall in his gubernatorial office. And if anybody has come close to earning an honorary degree from the Limbaugh Institute, it is the governor of Florida, Ron DeSantis. He has clearly had enough of the Drive-By Media. After months of being slammed by fake news and by the gloom and doom casualty forecasts over his handling of the coronavirus, the governor called them out. 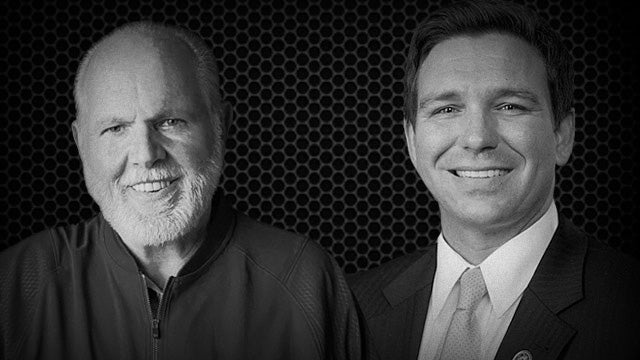 TODD: This is why… We’ve talked about this in the program. This is why Ron DeSantis got our dear Professor Limbaugh’s attention. This was on Rush’s final program, February 2nd. Rush spoke with a lot of admiration for Governor DeSantis and how his courage to stand up to the left and how this made Ron DeSantis a target.

RUSH: Have I mentioned lately how much I admire the governor of Florida, Ron DeSantis? Details coming up, but he has launched “an ambitious crackdown on Big Tech.” Somebody with the guts to do it. He’s somebody also not closing down his state because of the COVID virus. Now, Ron DeSantis. This guy has got what we call an iron-enforced spine, the governor of Florida. “In a 45-minute speech, the governor [of Florida, Ron DeSantis] identified Big Tech companies as the leading threat to American democracy and freedom of expression today, and pledged that Florida Republicans would take action.

“[He] accused the tech giants of ‘clear viewpoint discrimination,’ highlighting the censorship of Donald Trump and the removal of Parler from the internet and Apple and Google-controlled app stores. ‘The core issue here is this: Are consumers going to have the choice to consume the information they choose, or are oligarchs in Silicon Valley going to make those choices for us?

“‘No group of people should exercise such power, especially not tech billionaires in Northern California,'” and, man, oh, man is that right. Tell me: Where else do you hear anybody speaking out like this — in government? Yeah, you have some op-ed writers, some other people speaking out on this, but this? You don’t hear elected officials so much. Some members of Congress do.

Miranda Devine in the New York Post today has a great piece on the same subject, and that is these tech oligarchs literally running the news business, running the opinion business. They’re running the information business in America. Now, we’re watching… Let me just tell you: We are watching the de facto merger of media and social media and state — government — the merger of giant corporations and state.

This is when Democrats control Washington. The propaganda arm of the Democrat Party has never been more powerful than today, and don’t forget that they’ve got Antifa and Black Lives Matter soldiers as their military arm. Republicans who do not cave to the extraordinary pressure exerted on them in Washington today… Do you know who they are?

“Two weeks! That hasn’t happened in four years. Two weeks. In these same two weeks we’ve heard nothing but ‘Trump, Trump, Trump’ from the Democrats and the media,” and I had the same observation today. I was watching CNN, and they were doing a story about how incompetent the Trump team was last December in the Oval Office.

I said to myself, “Is it so bad that there’s no news, that the only story you’ve got is what a rotten guy Trump was last December?” It was a story about how “conspiracy theories” were the dominant subject in a knock-down-drag-out conversation/discussion in the Oval Office in the middle of December. I’m saying, “You know, we’ve got a brand-new president.

“We’ve got all kinds of stuff happening. We’ve got the impeachment coming up and all you guys is the CNN can do is a long, drag-out story on Donald Trump’s December? He’s gone! He’s no longer president. It doesn’t matter,” and yet it does, apparently, to them. They are not going to let up on the gas pedal, folks.

They’re gonna continue whatever they think they have to do to destroy the guy, to impugn the guy, to ruin the guy, his family, supporters. They’re not gonna let up on the gas. Just amazing.

TODD: Just amazing to hear Rush talk about this merger of state and social media and tech. This was on Rush’s final program just this week as Dr. Rachel Levine, who’s a man who “presents as a woman,” is wanting to be assistant health secretary, a failed so-called public health director. One of his big issues supporting kids to be able to “not go through the wrong puberty,” as if that’s a possibility, that they would go through the wrong puberty.

It’s an incredibly radical position. Rush spoke of the merger of state and tech and social media. This week, Amazon disappeared a book. It’s a scholarly book. It’s called When Harry Became Sally. Incidentally, it is written from a perspective of profound love for people. I’ve read the book. I’ve read it twice. And it’s written from a perspective of concern for people, particularly kids, who are confused and being caused to be confused about their gender because the left is merchandising this.

Amazon has disappeared the book, and you have Zoom, an app made or blessed by the Chinese Communist Party, that sent a warning letter to a woman who is what’s called a “gender skeptic.” She doesn’t believe that boys can become girls and vice-versa. This is Zoom, a communication app that said you can’t continue to teach this, and there was the Maha on his last show warning about all of this — and of course, he was right.