The Greatest CPAC Speech of All Time

KEN: This weekend is CPAC. I believe it’s already started, but this is outstanding. Rush will be honored at CPAC. He will be inducted into the Conservative Hall of Fame. There’s going to be some great, great celebrations of Rush, his life, his speeches. So it’s gonna be a great opportunity. So if you can see it somewhere, by all means try to tap into that.

I want to go to this next clip, and this gives you an idea of the power of Rush at the podium. Here it is.

RUSH: I must tell you: I’m a little queasy about doing this. A couple of years ago during CPAC, I had some people call and say, “Why don’t you play some excerpts of your great speech?” In fact, I’ve had people say, “Rush, why do they even do CPAC anymore? I mean, what’s left to be said after your speech?” I can understand that. But the kids still need a place to party. In Washington in March, what else are you gonna do?

So I’ve always felt queasy because people accuse me of trying to upstage the speakers. We even had calls from people, “What are you doing? I mean, you just have to get in. Even though you’re not there, you just have to pretend you’re there. You just have to act like you’re headlining it.” No, no, no. I was requested. Well, in this instance, this year, CNN did it. CNN went back to their archives and played sound bites of my CPAC speech four years ago. It was their infobabe Brooke Baldwin actually late yesterday afternoon, and this is how she introduced it…

BALDWIN: Here’s an image you may remember. This takes you back a couple of years. This was CPAC 2009, Rush Limbaugh. Remember this speech? He fired them up. What you get at CPAC, is you get a lot of talk about conservative principles, lower taxes, faith to the Constitution, never bending to the winds of change.

RUSH: See? “Never bending to the winds of change,” which is a crock. But that’s the agenda. So let’s go back. It was an hour I was scheduled to finish, and it was going so well, the guy on stage came up and asked, “Can you keep going for a while?” They had another half hour to fill. I said, “Sure, no problem.”

RUSH: Let me tell you who we conservatives are: We love people. 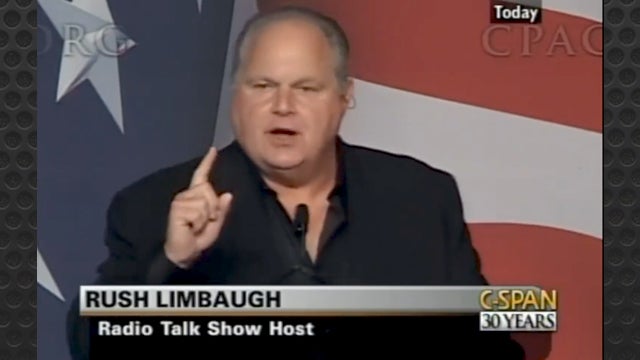 RUSH: When we look out over the United States of America, when we are anywhere, when we see a group of people, such as this or anywhere, we see Americans. We see human beings. We don’t see groups. We don’t see victims. We don’t see people we want to exploit. What we see — what we see is potential. We do not look out across the country and see the average American, the person that makes this country work. We do not see that person with contempt. We don’t think that person doesn’t have what it takes. We believe that person can be the best he or she wants to be if certain things are just removed from their path like onerous taxes, regulations and too much government.

RUSH: We want every American to be the best he or she chooses to be. We recognize that we are all individuals. We love and revere our founding documents, the Constitution and the Declaration of Independence.

RUSH: We believe that the preamble to the Constitution contains an inarguable truth that we are all endowed by our creator with certain inalienable rights, among them life.

RUSH: And the pursuit of happiness.

RUSH: Those of you watching at home may wonder why this is being applauded. We conservatives think all three are under assault.

RUSH: Well, I see that Cookie has not edited the applause here. I’ll tell you a little truth. As is the case in all of my speeches, I had barely thought about it. That’s why I don’t like speeches. I don’t plan them, I don’t write them, and I live in perpetual fear that when it’s time I’m gonna have a brain freeze. But I can’t write a speech. My mind doesn’t work that way. It’s not nearly as fluid, fluent, when I do. So I have to ad-lib these things.

“South America looks to us. Europe looks to us. China looks to us. People are trying to break into our country every day.” You don’t need to put that on a teleprompter. That alone should make you wonder about what the heck’s going on on the left. If you ask Joe Biden, “How was your birthday cake?”

“Uh, uh, no one wrote me how it is.” I love it when Rush said, “If you’re tuning in and you’re wondering why we are applauding these things” like liberty and freedom and pursuit of happiness and life — and that’s the truth. He didn’t miss an opportunity to let America know where it was in history at the time, where it has been, and where it could be going if we don’t pay attention.

And he knew how to get attention.

By the way, one quick note before we hit the break. Brooke Baldwin had — or I call her Babbling Brooke Baldwin, like a babbling brook. She had introduced that sound bite of Rush. I just want to let you know, I know many people are gonna be upset. Brooke Baldwin is leaving CNN in six weeks. She is. Yes, I… Yeah, I know. I know. Who’s gonna make Chris Cuomo feel important? Your guess is as good as mine.

KEN: Well, I have to say, I’m getting more energized as the show goes on because of you and your calls and your comments. When I opened the show today as a guest host, this was the first time that I had been in studio since Mr. Limbaugh moved on, and I didn’t know how it was gonna play out. And then I realized that we are all listeners.

So I am your fellow listener that’s working with you. I just happen to be in the studio today. And I just had a delicious lunch. My wife makes me lunch every time I fill in for Rush. No, actually she makes me lunch regularly. She just started returning my calls when I started filling in for Rush. She doesn’t block my calls now. It’s very exciting.

And we’re still married. We’re still married. 800-282-2882. This is the Rush Limbaugh Show on the EIB Network. And we will continue to bring you Rush’s words and wisdom well into the future. And I wanted to — actually the team set it up — do a little bit more CPAC, because this is really a cool thing for Mr. Limbaugh to be in the conservative Hall of Fame at CPAC. So it’s gonna be an energizing weekend, and the president that was just reelected, Donald J. Trump, will be at CPAC as well. So let’s continue with some of Rush’s past speech.

RUSH: So we land at Dulles Airport, and we’re driving in. It’s about an hour/hour and a half before I’m supposed to go on.Kathryn said something to me, I forget what it was, and a little light exploded. I said, “You know what? I’m going to treat this as my first ever address to the nation,” as though I’m doing a State of the Union speech or whatever. That’s where I got the idea to approach it this way. I had no idea what I was going to say. I really didn’t. I really don’t at any one of these speeches. I think about it day in and day out, but I never commit to anything. I wait until I hit the stage or right before it. 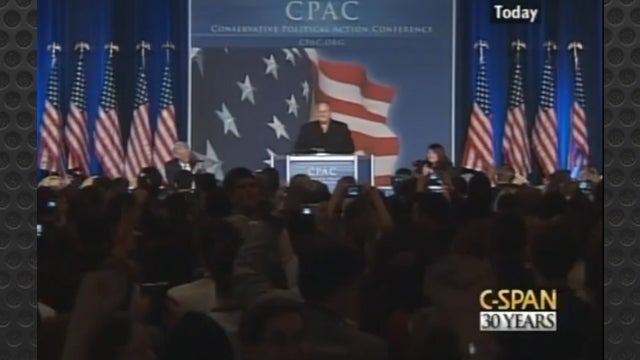 I maybe jot some notes of things that are in my mind as an outline and then go for it. That’s why I live in perpetual fear of doing speeches, ’cause I’m scared to death that when the light goes on I’m gonna have a brain freeze and have nothing to say. It hasn’t ever happened, by the way. Anyway, the next bite. Everybody was all caught up back then with, “I hope he fails.” This is February 28th, and it was six weeks prior that I had said about President Obama, “I hope he fails,” which had caused, you know, a big excrement storm. So I thought that I would address it again.

RUSH: For those of you just tuning in on the Fox News Channel or C-SPAN, I’m Rush Limbaugh and I want everyone in this room and every one of you around the country to succeed. I want anyone who believes in life, liberty, pursuit of happiness to succeed. And I want any force, any person, any element of an overarching Big Government that would stop your success, I want that organization, that element or that person to fail. I want you to succeed.

RUSH: Also, for those of you in the Drive-By Media watching, I have not needed a teleprompter for anything I’ve said.

RUSH: Okay. I gotta go. I gotta take a quick commercial break. There’s two more of these. This is from my CPAC speech in 2009, four years ago.

RUSH: Okay, one more. I have time for one more bite here, and it’s a continuation of the whole business of failing and success.

RUSH: I know what’s going on. I know what’s going on. We’re in the aspects here of an historic presidency. I know that. But let me be honest again. I got over the historical aspects of this in November. President Obama is our president. President Obama stands for certain things. I don’t care, he could be a Martian. He could be from Michigan, I don’t know — just kidding. Doesn’t matter to me what his race is. It doesn’t matter. He’s liberal is what matters to me. And his articulated — his articulated plans scare me. 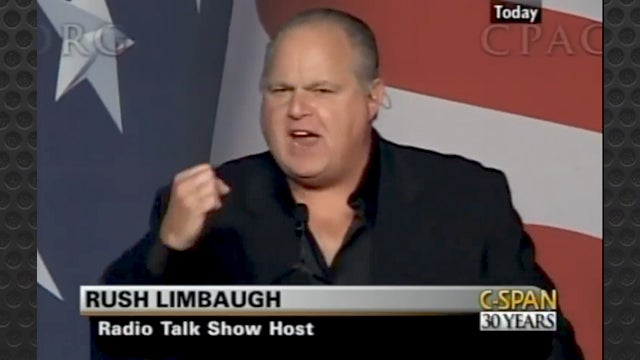 RUSH: It was the CPAC Olympics. Look, folks, I intended to squeeze some phone calls in here, but I’d forgotten how fascinating I was. Again, I’m not trying to do anything with this year’s CPAC, but I’m really inundated with requests every year to play segments of it. We always wait ’til the last of the show to do it to cause as little offense as we can.

KEN: I love it. He forgot how fascinating he was, and he probably just triggered people. How many soy boys and social justice warriors were just triggered? “I can’t believe he said that.” He is fascinating, and he knows it. It’s confidence. The left should try it sometime without a teleprompter.