BRETT: Let’s jump out to I-54 in Kansas and talk to Dwight, who is up next. Dwight, welcome to the program.

CALLER: Hey, Brett, thank you, and God bless everybody there at the EIB Network for keeping Rush’s legacy alive.

CALLER: I’d like to know exactly what is going on with Hunter Biden computer and the emails from Hillary? Where do we stand on all of that?

CALLER: Is that swept under the rug? 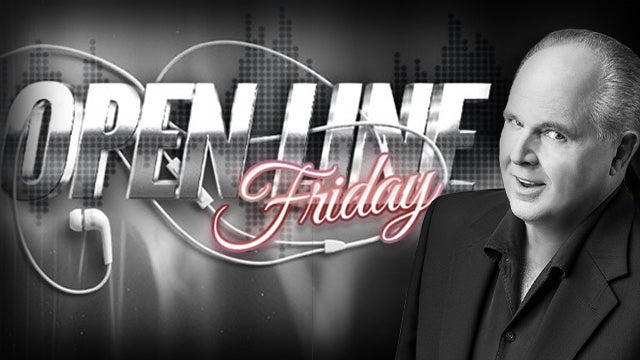 The laptop is still, you know, in possession, I’m assuming, of the Federal Bureau of Investigation. Perhaps Chris Wray is looking at it as we speak. Look, I’m not optimistic about us getting any real information on either of those stories. Merrick Garland swore to us he was gonna be a nonpartisan attorney general, and we know what he has in mind.

He has in mind continuing to enact the social justice ideology that we have seen manifest throughout the rest of the administration. It’s not about finding out who did what and why this happened. It’s not about law enforcement. It’s really more of about issue management, I think is what you’re going to see. Of course front and center will never be Hunter Biden or Hillary’s emails.

It’s going to be the insurrection, the insurrectionists and that narrative and those prosecutions that will no doubt be looming large in the near futures. Great call, Dwight. I appreciate your kind words. Donna is in Paso Robles. Donna was on hold on Wednesday when I was in and I wanted to get to you, you held on for a very long time. You wanted to say something about Rush.

CALLER: Yes, I had wrote a poem about how I feel about Rush.

CALLER: “Rush is our man, you see. He talks us all about liberty. He said we will lose all our life we need, because the enemy is there to destroy us all. So please hang in there and heed Rush’s call. We’ve lost a friend and a warrior, too. So listen to the takes of someone who loves his country and his audience too. We’ll miss our friend as time marches on. (chokes up) So rest in peace, dear Rush. You’re still our man!” And you’re doing a great job, Brett, and thank you, and God bless all of you, and sorry for Kathryn and the rest of you that know Rush personally.

BRETT: Thank you, Donna. Your words mean a lot, and that was a beautiful poem, and I think it’s an incredibly poignant tribute to Rush. He’s still with you, folks. He’s still with us. We have memories. We have these great clips we’re playing — and, you know, he was right. He was right. All right. Loretta is in Mabel, Minnesota. Loretta, welcome to the program.

CALLER: Thank you very much for having me on.

CALLER: I have never heard this on the radio before. But this was years ago Rush Limbaugh was on the TV, and he had asked everyone… He was on the TV I think it was in the evening, if I remember right.

CALLER: And he asked everyone to send in a family picture.

CALLER: And our church had just taken a picture, so we had some really nice ones to send in; so I had sent one in and I’m thinking it was in the late sixties or in the seventies, and I’d never heard this brought up before, and I was wondering if his wife, Kathryn, had ever heard of this and if Rush had kept them someplace or something. But I just thought it was interesting ’cause we’re in the eighties!

BRETT: Yes. Yes. Yes. So this was back in the late eighties, into the nineties with Rush’s television show, and he asked people to send them in to the show.

CALLER: This was the sixties.

BRETT: Yeah. He asked people to send pictures in. I will have to try to run that down and find out what became of those pictures. I imagine he was curious to know about his audience and wanted to find out where that was coming from. I will “effort” what I can in that regard. We will tickle the files and attempt to find that out and dig up an answer for you, Loretta. It may be on another day with another host, but we’ll certainly do our best to get that done. Christine in Ohio, on cancel culture. Christine, welcome to the show.

CALLER: Hi. I called in to comment on the cancel culture and the things that they are canceling. So if you notice a lot of things that are getting canceled are history that is negative to their popularity.

CALLER: So, I mean, if they’re canceling all the culture that makes them in a negative view, the future will never know exactly what is going on and who was on the right and wrong side of things.

BRETT: Mmm-hmm. That is right.

CALLER: And I think that should remain… History is history. American history is important.

CALLER: Canceling all of that is very… It’s just ridiculous. And we need to teach everybody what could happen if the past is repeated.

CALLER: Once you start erasing the past and things that happened, you were bound to repeat history.

BRETT: Amen! That’s exactly right, Christine. Well said. And you absolutely knocked it out of the park in that regard. If we don’t acknowledge it, we’re damned to repeat it, and we don’t want to be in that predicament, now or in the future.