Get Ready to See It Again: Rush Recognized the Norks Knew How to Snooker Dems

KEN: North Korea just launched two missiles — yeah — that they weren’t supposed to launch, and Kim Jong-un’s sister… What the heck is her name? Oh. Is it Kim…? I forget her name. Anyway, I don’t want to make it up. But it’s her… I guess she’s Little Rocket Chick if he’s Little Rocket Man. (interruption)

Oh! Her name is Kim Yo-jong. There you go. So Kim Yo-jong said to President Biden, “Don’t mess with me.” (laughing) Don’t you love those spunky commies? They just get right up in your face! I mean, she’s like a little AOC. “Don’t you mess with me — and why haven’t you cashed our check yet?” By the way, that’s Mike’s joke.

I wish I could take credit for it, but it was such a great joke I had to give our sound guy Mike credit. He said the North Koreans and the Chinese are wondering: Why won’t Joe cash their checks? But Rush, of course, was ahead of the game, and this is what worries me. You know, all kidding aside.

We’re having fun with it because conservatives by nature, we’re naturally positive. We’re optimistic. We pull comedy out of things to keep our sanity rather than let anger eat us up, ’cause then you end up like Nancy Pelosi. I mean, look at her. She’s angry all the time.

But the real problem is this guy that we were listening to — or if you happened to be watching this afternoon — has got the nuke codes, and he is the commander-in-chief of the greatest military in the world. And I think if you took that lectern away, he would fall down. Here’s Rush. 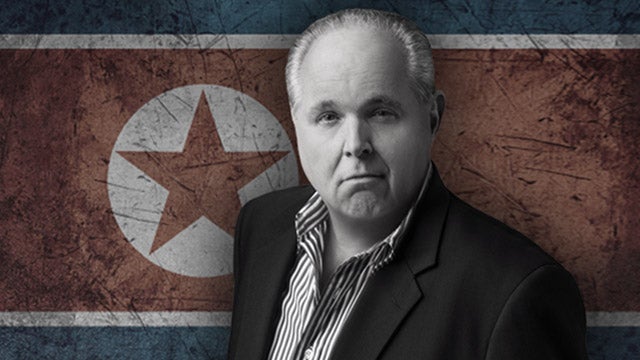 RUSH: Throughout the nineties, the Clinton administration — 1993 all the way to 2000 — North Korea was, off and on, a top-tier story and precisely about their nuclear ambitions and desires. Throughout that period, throughout two terms of the Clinton administration there were negotiations both unilateral and bilateral — meaning just us with the Norks and with others at the table — designed to persuade them it wouldn’t be a good idea to nuke up and that they should stop launching these little piddly-wink missiles that they’ve got and behave.

And they told us, “Okay! We’ll do that if you’ll help us build up our power grid. “We would like to use nuclear for our power grid.” So Clinton said (impression), “Hey, you know, I got no kind of problem with that whatsoever. I’ll send Bill Richardson over there, Madeleine Albright, and we’ll fix you right up. But you gotta promise you’re not gonna go nuke weapon on us.” 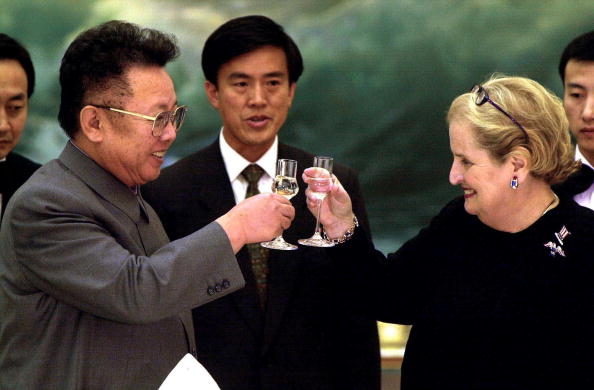 “Oh, no, Mr. Clinton! Oh, no, no! We in North Korea, we never break promises. We’ll never, never go nuclear weapon on you. We will always do nuclear power.” (impression) “Then you’re right in there, Mr. Kim! No problem whatsoever.” And they made mincemeat of us, they nuked up, and that’s what we’re seeing now.

And all during that period, folks, the media was praising the Clinton administration for having the guts, courage, brilliance, just awesome diplomatic talent and skills, and we were having rings run around us. A 1994 headline: “Clinton Says His Deal with North Korea Would Make the World Safer.” August 8th: “Former President Bill Clinton thought he saved the world from a nuclear North Korea more than two decades ago, but he was wrong.”

Here is Bill Clinton in October of 1994. Ready? “This is a good deal for the United States,” he said at the time. “North Korea will freeze and then dismantle its nuclear program. South Korea and our other allies will be better protected. The entire world will be safer as we slow the spread of nuclear weapons.” 1994. “Good deal for the United States. North Korea will freeze and dismantle its nuclear program…” I don’t think that happened, did it? Can I share with you Barack Obama’s statement after the Iranian nuke deal, April 2, 2015.

“It’s a good deal, a deal that meets our core objectives, including strict limitations on Iran’s program and cutting off every pathway that Iran could take to develop a nuclear weapon.” Now let me repeat these. Bill Clinton, 1994, about North Korea: “It’s a good deal for us. North Korea will freeze and then dismantle its nuclear program. South Korea and our other allies will be better protected.” Obama two years ago: “It’s a good deal.”

Clinton says, “This is a good deal.” Obama says, “It’s a good deal, a deal that meets our core objectives, including limitations on Iran’s program and cutting off every pathway that Iran could take to developer a nuclear weapon.” Clinton says the same thing about the Norks in 1994 as Obama said two years ago about the Iranians. Using intelligence guided by experience, how long’s it gonna be before we’re in the same set of circumstances that we are today except the country involved is gonna be Iran?

Mike, I want you to play these back-to-back with no commentary between them by me. This is Bill Clinton first — October 21st, ’94, on North Korea — and Barack Obama on April 2nd, 2015, on Iran.

CLINTON 1994: This is a good deal for the United States. North Korea will freeze and then dismantle its nuclear program. South Korea and our other allies will be better protected. The entire world will be safer as we slow the spread of nuclear weapons.

OBAMA 2015: Today, after many months of tough, principled diplomacy, we have achieved the framework for that deal — and it is a good deal, a deal that meets our core objectives. This framework would cut off every pathway that Iran could take to develop a nuclear weapon.

RUSH: Yeah, the same way we did with the Norks. We cut off every pathway. We slowed the spread of nuclear weapons in North Korea. Snookered twice, folks.

KEN: Whew. And heading toward a third time under Joe Biden. It’s kind of scary, isn’t it, to hear the truth so clearly explained? Two things bother me about the Democrats in this situation. Number one, they recycle the same stuff, the same lies, the same ignorance over and over.

It doesn’t matter, ’cause the media keeps ’em protected from the truth. Then the other thing that’s always bothered me about the left and the Democrat Party in general — the Joe Bidens, the Bill Clintons, the Barack Obamas, the Hillarys — is they trust communist leaders more than they trust you and me, and that really bothers me.