Don’t Doubt Rush! The Real Reasons the White House Wants to Tax You by the Mile

They’re floating this idea of a per-mile charge to fund what they pretend is an infrastructure bill, which is a big spending bill, as Rush will explain here in a moment. Now, think about this. Is the gas tax a per-mile charge? You move your car; it sucks in gas. When you refill, you’ve paid for the miles you’ve driven. It is a per-mile charge. 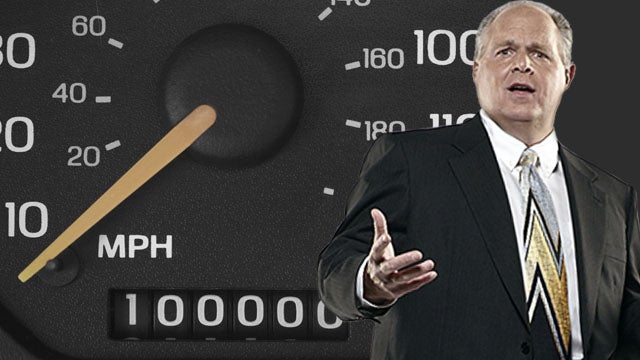 This has nothing to do revenue. This has to do with another societal flip. In the separate country of Oregon, in the separate country of Seattle that’s taking over Washington state, they are moving GPS units into people’s cars, first by blackmail, secondly it will be by force. And what they’re doing is applying variable pricing to your drive. This is what they will do.

They’ve done this with toll lanes. In Washington, D.C., it can cost you 47 bucks each way to work — so nearly a hundred dollars per day to go to work — or you can give up your personal autonomy and sit in a choo-choo train or a bus. And for people who live in the rural areas, this is a death knell, because they can crank up the prices until you can’t afford it.

So they say it’s a new pricing mechanism, but it’s not, because the gas tax is that. This is a tracking mechanism, because the GPS units they’ve used in Washington state do some other things, like they can alert your insurance company that a computer determined you aggressively braked — the computer doesn’t know why you did that — or that you swerved.

The computer doesn’t know why you did that, but it has something else. They can decide that, “You know what? We don’t like people driving at this time of day so we’re gonna take that away.” You wake up in the morning, you get in your car, and it says to you, “Hey, oh, I see that you’d like to drive from let’s say Austin’s outer limits into downtown Austin, Texas.

“Congratulations! That’s gonna be a hundred bucks,” and this is how they want to seize control of this thing that annoys them, these freedom machines. Now, before the technology existed, the GPS technology existed to blackmail people into moving into the city-states — I said city-states — or giving up their two- and four-wheel, you know, freedom machines, Rush pointed out that the Democrats, especially Obama, wanted higher gas prices to force so-called green energy upon us.

RUSH: Fifteen stories, negative stories blaming Bush for the gasoline price rise in 2007 and 2008. One story on Obama for every 15 Bush stories. So the question becomes: Will the media ignoring the rise in gas prices be able to keep that from becoming a major factor in people’s minds over the economy and Obama’s role in it? They know their buddies in the media are not gonna harp on that, but rising gas prices are real, nevertheless.

We heard about all the ancillary effects of the leisure industry, all of the destruction brought about by rising gas prices. We’re not gonna get that with Obama in the White House, but will it matter? ‘Cause the public’s gonna feel it. There’s no way you can it will ’em it’s not happening. You can ignore that it’s happening if you’re the media, but there’s no way you can tell people it isn’t happening.

Because $4 was the tipping point. At $4 a gallon, people went nuts — and, by the way, in order to get $4 a gallon, the oil price was around $147 a barrel. Remember, the president is on record as saying he didn’t mind $4 a gallon. He was a little disturbed about how quickly it got there. But for the regime, four bucks or higher, that’s exactly what they want! Don’t doubt me on this, folks. He has wanted this.

If you’re gonna doubt me simply because you’ve been told I lie — you know, you’re listening here for the first or second time and you’ve already got me figured out. You’ve been told that everything here is a lie and it’s all made up and all that. If you’re gonna doubt me when I claim that Obama’s very happy with rising oil and energy prices, then simply examine what he said. What is it that he wants? What is his nirvana? Green energy! He hates the coal business.

Here it is, from June the 10th of 2008 — CNBC’s Your Money, Your Vote — the chief Washington shill, John Harwood. Yes, I said “shill.” This guy supposedly works in the media but wait until you hear the question. He’s interviewing Senator “Barack-ay” Obama (as pronounced by Khadafy), and the chief Washington shill for CNBC, John Harwood, said to Obama, “Could the high prices help us?” President Bush, could the low unemployment numbers help us? What is this, “Senator Obama, could the high prices,” oil, gasoline, could the high prices “help us?” What the hell is that? It’s a shill. And here’s what Bamster had to say.

OBAMA: I think that I would have preferred a gradual adjustment. The fact that, ehh, this is such a shock t’American pocketbooks is not a good thing. Uh, but if we take some steps right now t’, uh, help people make the adjustment — first of all by putting more money into their pockets, but also by encouraging the market to adapt to these new circumstances more quickly, particularly U.S. automakers.

RUSH: “I would have preferred a graaaadual increase in prices. I don’t mind the high price, John, Mr. Harwood. I don’t mind the high price at all. I just think we got there a little bit too quickly. But it actually could help us move into this worthless green technology area, which is nothing more than a slush fund money laundering operation for me.”

TODD: They’ll help us move into this over time. Right? They intend to go from what Obama was seeking into GPS units in our cars, and it is up to us to point out to our friends, we already have a per-mile charge. If you want a solution and we want to pay for infrastructure based upon miles, I used to radio with a guy names Mike Lewis who is a hard-core liberal.